The Cheerleader Who Founded Guadalajara 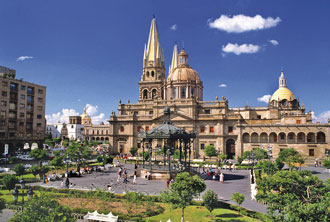 Whenever I show off my adopted city I always take my guests to the Plaza de Fundadores, behind the Teatro Degollado, where they see the statues of the two people credited with founding Guadalajara on February 14th, 1542. Nuño de Guzman, originally from Guadalajara, Spain had several failed attempts at establishing the Mexican site because the indigenous people refused to succumb to this cruel tyrant. His technique was to enslave and slaughter the locals. The other statue in the plaza is of a woman with flowing hair and billowing long skirts, Beatriz Hernandez. I think she was the real founder.

After several failed attempts Guzman led his weary followers to this spot and declared this to be their final location. Supposedly Beatrice Hernandez led the women in a loud cheer of hallelujah and proclaimed they could begin to build a real settlement. However, I think Beatriz earned her bronze statue for rolling up her skirts and then leading the ladies in settling at this location.

History is always eager to honor brave men, but I think Beatriz was the more gallant by secretly organizing the women, all of whom were tired of trekking across a vast and inhospitable land just so one egocentric man, Guzman, could claim the rewards offered by the Spanish Crown. In fact Sr. Nuño de Guzman was recalled to Spain, put in chains, and chastised for his cruel treatment of the native population.

No, it is conjecture on my part, but I think that the women were weary of their nomadic lifestyle and of their wandering throughout the desert like the lost Tribe of Spain. They were ready when Beatriz organized them into a band of sisters who actually refused to move one more time. I think Beatriz earned her statue and place in Guadalajara´s history when, during a secret meeting of this sisterhood she laid out a plan and declared, something like. “We women refuse to move from this location.”

I think she got the women together and they declared their unity and refused to cook meals, wash clothes, minister to the men´s baser desires unless they accepted this place as their new and ultimate settlement. It is my opinion that is how Guadalajara was established. And it was because of Beatriz Hernandez and her band of brave women that Guadalajara has inherited a spirit of adventure, acceptance of other races, cultures and is today Mexico´s leader in both industry and diversity. So I say, hip, hip hooray for Beatriz Hernandez and the bold women of Guadalajara.