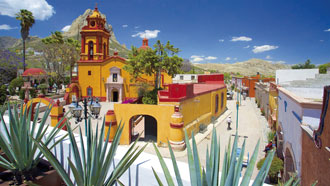 Writing a newspaper column about the greatness of Mexico can earn the writer a good deal of mail running the gamut from “Do you know a good dentist in Morelia?” to “My wife and I would like to know where we should start looking to live in Mexico.” I don’t know a Morelian dentist to recommend, but there are any number of fine villages, towns, and cities for foreigners to consider in their quest for a new life. Querétaro, Qro, should be high on any list of places to check out.

The small suites in this boutique hotel and spa are magnificent and comparatively inexpensive, if you compare them with the Waldorf Astoria, the Four Seasons, or the Beverly Hills Hotel. Rooms, Junior and Master Suites average about $160 US per day, with the presidential suite at $200. Believe me, you get your money’s worth.

The rooms are gloriously furnished in beige and white, with gigantic, extremely comfortable beds. Most rooms have a balcony or patio, overlooking magnificent gardens and heated swimming pool. White chiffon draperies billow into the rooms on the cool breeze, and floor-to-ceiling wood shutters slide smoothly to a close, if you prefer darkened rooms for a sleep-in.

It’s tempting to stay inside the Doña Urraca Hotel, even in such a glorious city as Querétaro, because the Hotel is also a spa, and not an ordinary one. For a mere pittance, assuming you’re wealthy to begin with, you can order a superb Maya Peel Butterfly and Osilife Plus, which “improves your skin and luminosity through pure oxygen infusion.”

They also feature a procedure called Synérgica which uses natural fruits and vegetables to give your skin “a delicious vitaminic balance.” Beauty technicians are very smart at Doña Urraca and even remember to slice the cucumbers before placing them on your eyelids. You can get a facial to end all facials, so healthy-feeling that you want to sell your house and permanently move into this Spa.

Technicians are also proficient in Reflexology from the ancient land of China, an art which has healed both mind and body for centuries. It goes something like this—pressure points on the feet are manipulated to rebalance the Chakras and assist the Chi energy to flow through the body. It’s even better than walking on cobblestones in your bare feet.

In addition to Holistic Therapy massage, Swedish massage, Quiro (Spanish) massage and detoxifying your lymphatic system through the use of muscular relaxation techniques, Doña Urraca Spa also specializes in Temazcal, a tradition from pre-Hispanic Mexico. The magic ritual of Temazcalli (“House of the Steam Bath”) uses medicinal plants.

A popular technique offered at Doña Urraca is Piedras Volcánicas, where hot volcanic stones achieve relaxation and energy harmony. This may be what is meant by getting one’s rocks off. Whatever, it’s divine.

Should you manage to peel yourself away from this charming and beneficial little haven of bliss, you’ll enjoy a short walk to the Zócalo (plaza) where you can find a two-story tour trolley to drive you. The most popular tourist place is The Aqueduct, commonly called simply “the arches.”

The Aqueduct was begun in 1726 and completed in 1735, supplying drinking water to the city from the springs of the Cañada. There are 74 arches 23 meters high, and 1280 meters long. You can also walk to the arches from the center of town, if you feel the need to exercise.

You should also check out the Government Palace located in the Plaza de Armas, once the home of one of Mexico’s greatest heroines, Doña Josefa Ortiz de Dominguez. Doña Josefa (September 8, 1768 - March 2, 1829) is frequently referred to as La Corregidora (the magistrate’s wife). Much insurgent planning was done in her home, and she supported the rebels financially. A plot was hatched to apprehend the rebel leaders, and Doña Josefa was locked in her room to prevent her from relaying information to her rebel friends.

However, she managed to whisper plot details through the keyhole, and her news allowed the leaders of the conspiracy to flee, and prompted Miguel Hidalgo to issue the famous Grito de Dolores during the early hours of September 16th, signaling the beginning of the Mexican War of Independence.

A monument honoring Benito Juarez is at the top of the famous Hill of the Bells to the west of the city. This is where Emperor Maximilian and others were shot during the French occupation. It is now a beautiful park with vast green areas, playgrounds, a lake, theatre and the City Museum.

Among the beautiful churches and cathedrals to be found in Querétaro, is the not-to-be-missed 18th Century Ex-Convent of Santa Rosa de Viterbo, one of the most impressive colonial Baroque buildings in all of Mexico. Restoration on the extraordinary altarpieces, walls and paintings, and the original organ still in the choir loft, has been underway for some time. You can watch new gold leaf being applied to the neo-Classic altar pieces. The bell tower on the eastern side of the church holds the first three-faced clock in America. Generations to come will be able to enjoy this superb architectural achievement.

After a few days of sight-seeing, shopping for crafts such as ceramics, embroidery, silverwork and leatherwork, you can return to your hotel for a fine meal, or sit outside in restaurant patios surrounding the plazas, watch the people, and listen to free concerts. All things considered, Querétaro is a choice destination, an easy 220 km north of Mexico City on Federal Highway 57D.

It’s well worth the trip, and I’ll bet, if you need one, you can find a good dentist.