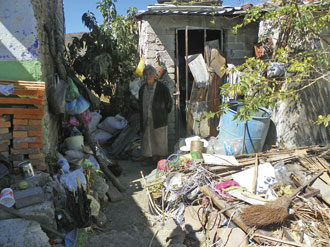 The Tepehua Community Center received donations through FWOP (Future WithOut Poverty A.C) to build cement stoves for the poor of the barrio, for those who were cooking on open fires inside and outside of their homes.  Using wood, they build camp fires losing heat to the wind and burning their precious supply of wood quickly, taking all day to cook a pot of beans, or filling the room with smoke lethal to a child.

Corazon De La Tierra of Guadalajara put in the first stove for a Tepehua family, supplying the material, and the performance of the stove was amazing.  The stove uses little wood and keeps the heat inside a little tunnel that runs under the cooking plates of steel.  The wood goes in a small opening on one side, which creates a type of vacuum carrying the smoke into a stove pipe, then up and out of the room.  The plates remain red hot, but the outside of the cement stove remains cold to the touch. Simple engineering.

As the gentleman from Guadalajara was building, the recipient was learning...and at the finish of the stove, beneficiary Juan Jesus was able to build the other two donated stoves according to the size and need of the chosen families.  This can now be turned into small Industry. The cost of each stove would be approximately 100 USD per stove.  The benefits of the stove are as the reader can imagine...stopping accidental burning of children because of open fires, pans filled with boiling water or oil, especially in inclement weather when cooking is done inside.

Guadalupe, an 85 year old Tepehua woman lives alone...her shack is too small to have her donated stove inside, so it is being built by Juan Jesus on the outside, a very low stove to accommodate Lupe’s height, which is about 4 feet. It will have just two burners instead of the original three.  Beans cooking in the pot, and an onion, carrot or tomato the local store owners give her, as she wanders around picking up kindling wood to sell, her entire day centered around collecting enough to have a meal at night.  Lupe has two sons, they live in an adjoining barrio to Tepehua, but lack of education and poverty does not allow them to help their Mother, as they too struggle to get a meal on the table for their respective families.

All these things are a band-aid on poverty for this older generation,  the need hopefully will be alleviated for the next as education is coming to the barrios. The younger generation are benefiting as their parents battle to keep them in school.  Local Governments are recognizing that keeping the people down through lack of education, does not allow a middle class to grow, societies are poverty stricken in many ways...knowledge being one aspect.  This writer is seeing change, and a more active aggressive lead in the fight for the right to education, and against poverty. The younger generation much more aware that change can only come from them, that civil rights matter.  They are indignant that people are still living in the third world here in Mexico.  This is not a third world country, it is emerging as a strong Industrial base, it has minerals and oil it has corruption, and it has hope in the future.