A Guide for the Single Guy 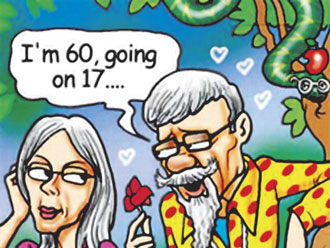 This isn’t a treatise for the veteran of a thousand romantic campaigns, who’s left fingerprints on most of the beautiful Lakeside ladies. Rather, it’s for the new man on the scene, either a new arrival, or one who’s no longer in a long relationship for one reason or another.

Here’s how it goes, typically. He surfaces as a single guy. First he shows up at the Ajijic plaza for a while at the Black Coffee and gets to know the regulars there, then he hits a few singles events. He finds out about music and dancing at La Bodega or Adelita’s, and maybe even tries out karaoke at Mama’s Bar.

Things go well for a while but then he realizes he’s getting tired of dining alone and in quiet moments confesses to himself that he was never that fond of dancing and he’s not 22 anymore, either.

He’s noticed by now that there are quite a few single women at Lakeside. Maybe it’s the beckoning ghost of Neill James, that intrepid woman who settled here in the 1940s and put Ajijic on the map. Whatever the reason, many independent and adventurous single women make their way to the shores of Lake Chapala.

And here they are: women of a certain age,—with their own money, and no children to clutter up any possibilities.  He likes this. He may start to date a little and will invite a lady for lunch, or dinner if he’s feeling daring. But he’s worried about making a premature choice. He feels pretty good about himself. He’s single and there are all these women.

Like my old friends Chuck and Harry. We had lunch a while back, when I was in Washington. Both these guys are single, divorced a long time and currently without girlfriends. And both of them are convinced that women over 50 are desperate for a man. I couldn’t argue with them. They held that opinion and that was that.

The like minded single guy down here will say to himself, “Wait! Why should I settle for one of the women I meet at those ‘grab a granny’ socials?”  He’s in a seller’s market and feels he can afford to be choosy. Consider Jim, who lives in an independent living situation where he has the pick of the ladies but he says they’re too old. He’s 87.

Our single guy thinks, “Look at all these beautiful warm-hearted Mexican women!” Why would he want to “grab a granny” if he could have a firm young body pressed up against his pacemaker?

He looks around and soon meets a lovely dark eyed lady and the door to Heaven opens. However, she leaves that door ajar and soon her sister comes to visit. Then her cousins. Then Tío Miguel needs a bit of help with his phone bill.

He’s glad to help his lady friend’s family, reasoning that he’s making up for the US theft of half of Mexico in 1848, but still he starts to feel overwhelmed with all this attention. He will of course offer to help with the phone bill. He’ll feel flattered at being asked to be a godparent. The requests may just keep coming. He will have lots and lots of drop in visitors.

Sometimes these ladies have family members with suspicious histories.  Then there’s the matter of the macho ex-boyfriend.  Scuba instructor Wayne fell in love with beautiful Gaby, who worked in her father’s burrito joint at the beach. He courted Gaby, taking her for rides on his shiny red BMW motorcycle. The ex took offense and made his feelings known when one night he poured gasoline over the bike, set it on fire, and fled to Mexico City.

The local police offered to chase him if Wayne could pay “expenses.” He did that, and a police representative went to Mexico City and came back with the wrong man.

Back to our expat. By now he’s learned, too, that Mexican women expect to be pampered and treated very well during courtship. He worries about dipping into his savings.

Jerry recently invited a lady out for a first date but she showed up with her daughter, son in law and granddaughter. He bought dinner for all of them and fortunately had enough pesos to pay for it, but now he’s afraid to take her calls.

There are, of course, lots of success stories.  Widower Denny married Lety and says he is having the best time of his life. She, like many other Mexican women, is strong, loving and caring.

But our single guy is feeling a little discouraged at this point and maybe looking for familiarity. His thoughts turn back to the gringa lady who is fine with the Dutch date, who has her own money, whose family is far up north and not likely to show up and move in. She’s looking pretty good to him by now. He’s tired of mariachi music. It’s too loud for his hearing aids. He needs some peace and quiet.

So he takes another look at the expat ladies who are down here. The numbers are certainly in his favor.  Not to mention they are considerably lower maintenance.

He gives it a try and things look up. The women are friendly and love his attention, for a little while anyway.  He might even think of settling down with one of them. He’s still feeling complacent about his prospects.  He knows the Spanish word for “handcuffs” is “esposas” but—magnanimously-- thinks he can give up a little  freedom.

But his foray into this world can be bewildering. He slowly finds that the freedom-loving ladies down here can be hard to capture.  They’ve heard about “esposas” as handcuffs too, and aren’t amused. They’ve grown to like sleeping in the middle of their beds. And don’t get them started on who controls the TV remote.

The expat is advised to approach members of this species with caution. The elusive Northern female is prone to feel skittish and bolt when the new man asks some of the following questions:

Do you want to see pictures of my grandchildren?

It’s a dilemma.  By here you have it, single men of Ajijic, choices--the beautiful younger Mexican woman with a village of family members, and the independent unencumbered Northern lady with her own money. The choice is yours. In the words of a very successful sports marketing campaign, “Just do it.”

Editor’s Note: Look for “Love at Lakeside” Part 2. The working title: “Women, Are You Ready to Move Over?”