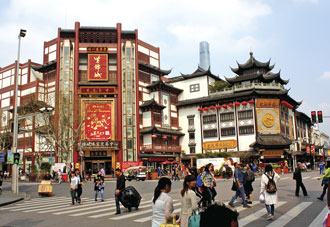 The Old City of Shanghai stands on the site of a small ancient settlement which first came to prominence when upstream silting forced the move of dock and market activities downstream in the 12th and 13th centuries.

Shanghai soon became one of seven ports of entry designated to handle overseas trade, and Old Shanghai grew up around the customs house.

In the 1800’s, as foreign concessions developed into new urban areas, Chinese authority was effectively restricted to the old city.

In the late 1990’s and into the next decade, parts of Old Shanghai were redeveloped into high rise hotels and residences, drastically changing the streetscape.

The development roused controversy, since it required the destruction of several houses of historical significance and demolition of the last surviving section of the old city wall.

In 2006, the Shanghai municipal government protected the remaining 34 streets of Old Shanghai as an historic landmark.

The Old City has been necessarily renovated, but its ancient winding streets and hundred-year-old stores still retain the flavor of old China

Shops here feature an incredible array of jewelry, porcelain, jade, and silk clothing, and there are a number of antique and curio shops.

There is also a seemingly endless number of shops selling snacks and sweets in flavors unheard-of in the West.

Not surprisingly, Starbucks serves no Chai in the land that introduced tea to the world, but Chinese green, white and oolong teas are offered along with local specialties like a Lychee & Strawberry Mooncake or Green Tea Latte.

Very surprisingly, neither Starbucks or its many Chinese imitators serve decaffeinated coffee.

While Old Shanghai is quite tranquil early in the morning, tour busses filled with badged Westerners and flag-carrying tour guides typically arrive before midday to beat the rush.

The crowd becomes increasingly robust as the day wears on, when it becomes a people-watcher’s delight.  Couples of all ages wander the narrow lanes and teens and pre-teens hang out here.

There are few Westerners around in the afternoon, but foreigners have been a feature of Shanghai life for so long that they invite no second look from local visitors.

Several unarmed police officers walk casually through the main courtyard, the first that I’ve so far seen walking a beat.

While Shanghai, like any city its size, has its share of pickpockets and motor scooter thieves, there is no sense of insecurity when it comes to personal safety.

Possession of weapons – from firearms to swords – is forbidden in China and penalties are severe.

When shopping, don’t be surprised if purchases are not rung up, but instead totaled and displayed on a hand calculator.

Also don’t be surprised when a merchant who speaks little English pulls up a language translator on a smartphone and the conversation proceeds as tag-team translation.

Fortunately for the tourist, China’s last dynasty, the Manchus, replaced cumbersome Chinese numerical characters with the Arabic numbering system used in the West, and it has been in prominent usage within China since early in the 19th century.

While my guide offers assurances that merchandise in Old Shanghai is the real deal, he also offers cautionary advice on shopping in other areas frequented by tourists.

China has a well-deserved reputation for knock-offs of Western products, so it’s “buyer beware” or your silk may turn out to be polyester.

Such retail fraud – along with change rendered in  counterfeit Chinese currency or an obscure foreign currency can be widespread in areas frequented by tourists.  It proves to be sound advice for my next 20 days in China.

Shanghai’s tranquilly beautiful Yu Garden is adjacent to the marketplace, and it’s the topic of my next post. 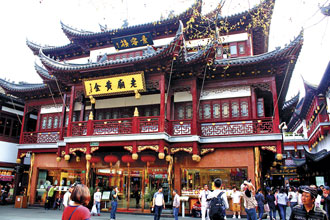 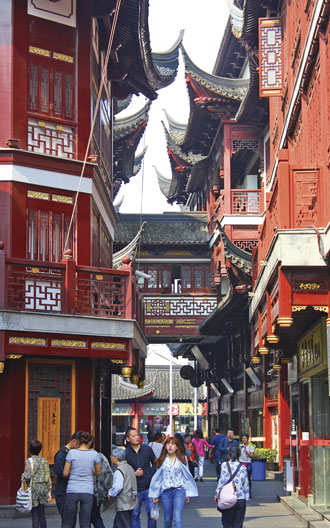 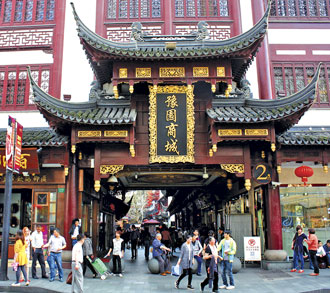 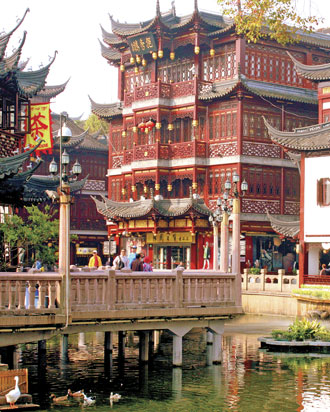 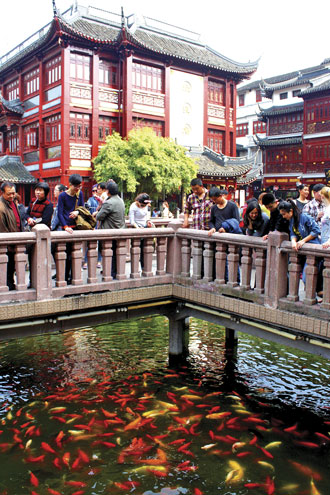 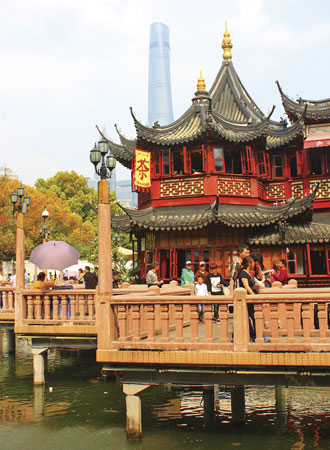 Tradition holds that the zig-zag bridge thwarts demons, who travel only in straight lines.