By Guest Editorial by Fred Mittag 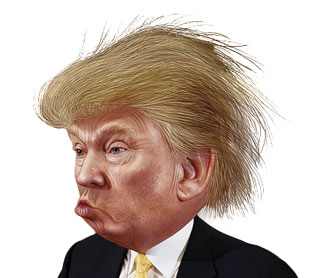 Fascism, thanks to Adolf Hitler, is a word one must use with care. The scale of horror that Hitler brought to the world in the name of an ideology has become indelible history. Still, the fascist movement pursued by Mussolini, Generalíssimo Francisco Franco, Hitler, and others, had identifiable characteristics in its formative stages, on a continuum to calamity.

A dictionary definition is “a system of government that exercises a dictatorship of the extreme right, typically through the merging of state and business leadership, together with belligerent nationalism. Donald Trump flaunts enough of these characteristics to alarm responsible people. They include the German news magazine Der Spiegel, actor George Clooney, former Labor Secretary Robert Reich, the Bush family, Mitt Romney, Ann Frank’s step-sister, ex-President Vicente Fox, and the current president of Mexico, Enrique Peña Nieto.

Trump is focusing his campaign on the anger of white working people who have been losing economic ground for decades, and who are easy prey for demagogues seeking to build their power by scapegoating others. Trump has several times tweeted quotes from Mussolini, and when questioned about it, dismissed the quotes as being “inadvertent.” The question is “How can a fascist Mussolini quote be inadvertent?” He had to first find those quotes and then make the decision to use them.

In the 20s and 30s, military defeat and economic depression plagued Germany. In America, we had the crisis of 2008. There has been some recovery, but all the gains have gone to the upper .01%, basically, a handful of extremely wealthy American families. There is the problem of student debt from college loans. American workers have lost $5,000 a year in purchasing power in the last couple of decades. Although we’re not in the same economic depression that Germany was suffering after WWI, Americans are suffering from failed expectations. The 50s and 60s saw a prosperous middle class, and people expected even better for the next generation. It didn’t happen and Trump exploits this and promises to be the strong man to correct stagnant wages by putting big tariffs on outsourced production in places like Mexico and China.

Trump’s constant theme is that we’re in decline and the world is laughing at us, but he’s going to make America great again and force Mexico and China to the will of the United States. It sounds a lot like Deutschland Über Alles. A chilling sight is when Trump asks his supporters to raise their arms and pledge that they will vote for him, no matter what. It looks eerily like the Sieg heil salute at one of Hitler’s rallies.

Fascism depends on scape-goating. For Hitler, it was the Communists, Jews, Slavs, and others. There was the nationalistic focus on purity of race. Donald Trump is using Mexicans, Muslims, and even blacks. When blacks have held protest signs at Trump rallies (Black Lives Matter), they have been roughed up and Trump approved, even saying, “Don’t worry about it. I’ll pay your legal bills.” When white nationalists such as David Duke have endorsed Trump, he was careful not to offend such support, and claimed he had never heard of David Duke, the famous Klansman and Neo-Nazi. Jews, including a the New York Times, report receiving anti-Semitic messages from Trump supporters.

Robert Paxton is a professor who has specialized in the study of fascism. He said, “I think that Donald Trump shows a rather alarming willingness to use fascist themes and fascist styles – and the response this gets, the positive response, is alarming.” Fascism rests not on any truth of doctrine. Facts don’t matter, only that the leader will actually get things done. Trump promises over and over, “Trust me. I will make America great again.” The fascists created cults of personality that assumed the appearance of strength and confidence. Trump tells his followers not to worry. “If you get laid off, I’ll get you a new job. Don’t worry about it.”

Fascists, being so nationalistic, didn’t bother about international law. Nor does Trump. He advocates torture and killing innocent family members of terrorists, against both international and American law. Donald Trump presents a profound danger to the future of America and the world.