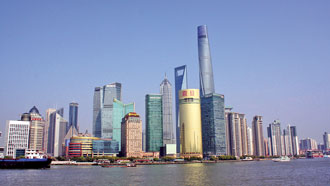 One of the most striking features of Shanghai’s spectacular skyline is the Oriental Pearl Radio & TV Tower.

The Tower stands on the east bank of the Huangpu River across from the historic city center in the Pudong (“East Bank”) District.

The Pearl Tower observation deck affords a spectacular bird-eye view of the city, and is a good place to get the lay of the land.

With a population of 1.4 billion, it’s no surprise that the Chinese excel at moving staggering numbers of people around with efficiency, and the crowd at the Pearl Tower is no exception.

As I look out over this sprawling city of 25 million, I can’t help but think that anyone looking down upon the Manhattan skyline in the 1920’s must have been similarly awestruck.

There’s an impression of incredible energy pulsing through the landscape below, and an inescapable sense of looking through a window into the epicenter of the global future.

Pudong is the site of the city’s Finance & Trade Zone and the Shanghai Stock Exchange, making it China’s financial hub.

The District also encompasses a high-tech park, the 2010 Shanghai Expo Center, and the Pudong International Airport.

Incredibly, this entire area was farmland until 1993.

Such explosive growth is the product of an economy that’s been growing at almost 10% annually – about three times the global average – since Deng Xiaoping introduced economic reforms more than 30 years ago.

China’s shift from a managed economy to a market economy has grown its GDP from $147.3 billion in 1978 to $11.2 trillion in 2015.  The Peoples’ Republic of China is now the world’s largest economy.

It’s hardly surprising that the Chinese people have embraced a free market economy so enthusiastically, or that they excel at it.  The Chinese already were trading their goods via the Silk Road before the birth of Christ.

The success of Chinese joint ventures with foreign manufacturing and technology giants seem to reflect the enterprising nature of a nation of shopkeepers now unbridled following three decades of Mao’s managed economy.

The nation not only manufactures more cars – about 22 million – than any other country  (almost 3 times as many as the U.S.) – but is also the biggest market for new cars.  China became the world’s biggest exporter in 2009, and Shanghai recently surpassed Singapore as the world’s largest containerized freight port

It is now the world’s third busiest cargo airport, the busiest international hub in mainland China, and one of the world’s 20 busiest passenger airports.

It is connected to the city by Shanghai’s Maglev Train, which uses magnets to lift and propel it.

The reduced friction allows the train to move at very high speeds, and it cuts a highway drive of nearly one hour to 8 minutes, reaching a peak speed of 430 kmp/267 mph).

A third passenger terminal and two additional runways scheduled to open later this year will raise annual capacity to 80 million passengers and 6 million tons of freight.  DHL’s Pudong cargo hub is the largest in Asia.

I’m struck by the amazing contrast between the way in which nominally Communist China has advanced even as the republics of the former Soviet Union have devolved.

The irony is also not lost upon me that Pudong’s modern skyscrapers directly face the city’s historic Bund.  It was from their Bund headquarters that the banking houses and merchant traders of the Western powers imposed their imperialism upon China, and first made Shanghai a financial and trading giant until its fortunes turned with the outbreak of World War II and the 30 years of isolation which followed.

This time around,  China is solidly in control of its own destiny, and is turning its new prosperity into better lives for countless millions of its people. 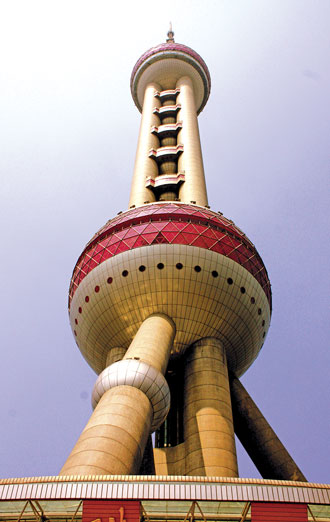 View from the base of the Pearl Tower 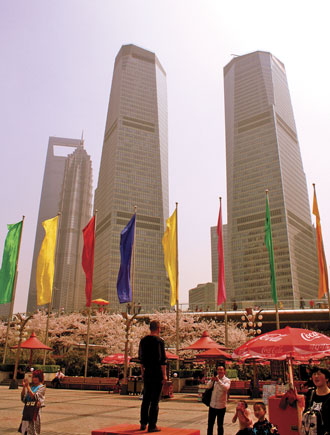 Promenade at outside the Pearl Tower 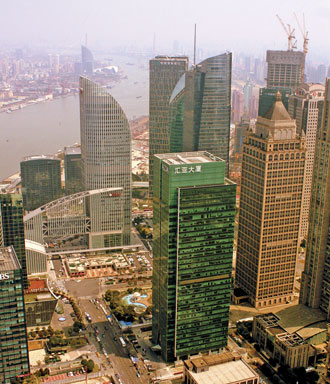 Downtown Shanghai from the Pearl Tower. 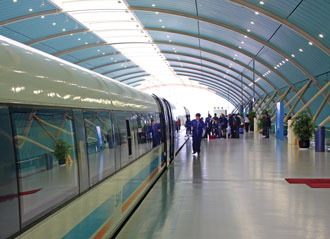 The Maglev Train pulls into the station

Only ferries crossed the river thirty years ago, and still do