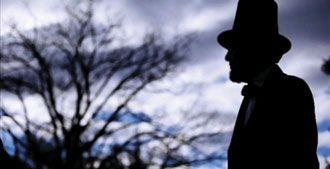 Setting: A prestigious employment agency in Washington, D.C. Time: Sometime late in 1858. As scene opens, a tall, solemn-looking MAN enters and walks stiffly toward a RECEPTIONIST. His gaunt features and melancholy-looking eyes immediately make her wary.

RECEPTIONIST: Our deliveries are made down the hall.

RECEPTIONIST: (with jaundiced eye) Well, I doubt that we have anything for someone of your ...type. But you may fill out our stan­dard application form... it’s probably a waste of both your time, as well as mine.

The MAN takes a paper from his long black coat and hands it to her. She looks as if she’d half-expected him to draw forth a pistol.

MAN: I’ve brought along my resumé. Thought it might save some of that precious time.

The woman reluctantly takes the resume. An awkward silence.

RECEPTIONIST: Not much of a conversationalist, are you?

MAN: (a gentle smile) Depends on with whom I’m conversing.

RECEPTIONIST: (glancing at resume) Not much of a record, either...let’s see (reading from paper) 1831—Failed in busi­ness... 1832—Defeated for the State Legislature...1833— Failed in business. Again ...1834—Elected to State Legislature. 1835—Sweetheart died... 1836—Suffered nervous breakdown. Well! If nothing else, you’re certainly honest!

MAN: (a glint of pride) Yes, I’ve been called that.

RECEPTIONIST: But I just don’t think we have anything in the office at the present time that you’d be right for...but if I may make a suggestion?

MAN: I’d be most grateful, ma’am. I obviously could use a little help.

RECEPTIONIST: Well, why don’t you try running for president? Seems like you’ve tried everything else!

The MAN smiles and backs toward the door.

MAN: Funny you should say that, ma’am. I’ve had the same thought myself.

RECEPTIONIST: Oh, better get your name, just to have it on file.

MAN: (pausing at door) Name’s there on the resume. And thank you for the kind advice.

The man quietly exits. The woman ponders for a moment, shakes her head, then drops the resume into a waste-basket and goes on with her work.

The End (or maybe the Beginning)