A Most Conflicted Priest 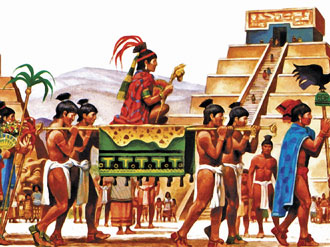 Sixteen years after Cortez conquered the Aztecs, Diego Durán was born in Seville, Spain. As a boy of five Durán´s family sailed from Spain to seek their fortune in the new world, research did not say if the family was successful, but it did reveal that when the family arrived they were not rich. I imagined the young Durán hoping that their ship would be attacked by pirates, but the young boy probably did not realize that pirates attacked ships sailing back to Spain with their gold.

Durán´s first home in New Spain was in Texcoco, then about fifteen miles from Mexico City.  Today Texcoco is a part of the vast Mexican Capitol City, but in the mid 1500´s this was a provincial town, earlier it had been the learning center of the Aztec Empire and after the Spanish conquest Texcoco became the refuge for some Aztec priests and many of the former royalty. Durán’s playmates were the children of the Aztec royalty and it was from his playmates and their grandparents that he learned the Nuatal language, history, legends and beliefs. Later, when he was Catholic priest, Durán used the Nuatal tongue to convert the indigenous people and to write three books about the Aztecs.

When he was a boy Durán would listen to the Aztec elders and adult family members of his playmates these proud people told the tales of the dying Aztec culture. He was a first-hand witness to the conflict between the Spaniards and the Indians as they evolved into the inhabitants of New Spain.  In 1556, at the age of nineteen, Durán became a Dominican priest, the Dominican order did not come to Mexico until 1525 and so, like Durán, they were a young order in Mexico.

As a priest Durán did his best to educate his fellow priests in the language and ways of the indigenous people. He said, “You must learn Nuatal otherwise you will not know if the native peoples are just agreeing with you, or if they are mocking you.” Durán also campaigned for more tolerance. He also warned his fellow Dominicans to be on guard because some natives used church feasts to drink too much, as they did during the previous pagan ceremonies.  Many of the early priests and missionaries were intent on destroying the native religions and ways in order to convert the indigenous peoples. Padre Durán worked diligently to adapt the church and the native ways, to bring some harmony between the two.

He was conflicted because on the one hand he was a Catholic priest first assigned to convert the heathens; he was also an educated person who realized the validity of the former Aztec culture.  At the same time Durán disapproved of the Aztec tianguis as he felt the Indians preferred socializing at the market to praying at church. He was horrified at the Indian bathing practices where both sexes and all ages bathed communally; he felt that human nature was base and that naked flesh of the bathers would tempt people into immorality. When he was in Oaxaca he knew of the Muxe, men born with a male penis, but who lived their lives as women and who were both honored and respected people of their communities.   He was conflicted with trying to both understand the Aztec culture and to reconcile the teachings of his Catholic Church.

As a priest, Durán realized the best way to truly convert the native of New Spain was to understand who they were, what they believed, to know their histories, learn their fables and speak their native tongues. The Dominican order sent Father Diego Durán from the capital of Mexico City to the remote area of Oaxaca, where as a young priest he frequented native pueblos and rural native areas. While in Oaxaca Durán wrote three very important works about the Aztecs, a history of their own recollection, a book about their religious practices and an atlas done in picture graphs in the style of the Aztec codices.

The first Book of the Gods and Rites, written from 1574 to 1576; The Aztec Calendar, only two copies were published in 1579 and Duran´s Historia de las Indias de Nueva España, published in 1581 and often referred to as Atlas of Duran. The Atlas is a unique document because it is a pictorial manuscript, much like an Aztec scroll, it has a series of 78 paintings with accompanying text, in Spanish. This Atlas depicts the entire Aztec history from the migration of the Aztec people to the Spanish conquest and the destruction of their capitol Tenochtitlán.

Both the Atlas (pictorial) and History (written), begin with the people setting out from the seven symbolic caves, (this reminds me of Romulus and Remus and the founding of Rome on the seven hills above the Tiber River). Finally the Aztecs arrived at Chapultepec; it ends with the death of Moctezuma. The History is full of paintings of birds, reptiles, various animals and the kingly jaguar. Scholars probably make the parallel that many of the animal and bird representations of other cultures are similar in power to those of the European eagles and lions that symbolize power and strength, just as the Aztec depicted these same characteristics with figures from their zoological pantheon.

The Historia de las Indias de Nueva Espana is a remarkable collection of 344 folios which includes drawings in Aztec style accompanied by Spanish texts. The drawings may have been done by literate Aztecs, or by Durán. Research was not clear on this, but the original manuscripts were secreted away from the prying eyes of the Holy Inquisition and was never used for education, as intended.

While Padre Durán was compiling his texts and drawings in far off Oaxaca, the Inquisition came to Mexico, run under the auspices of the Dominican priestly order of which Durán was ordained as a priest; what a conflict this must have been for the Catholic priest and friend of the Aztecs.  In Mexico the Inquisition focused on both the Aztecs and the Jews who left Spain for New Spain. Often both were outwardly practicing Catholic, but adhered to some of their original practices.

In reading I learned that the Inquisition was often more forgiving of the Aztecs because they could more easily convince the Inquisitors that they believed in the Catholic Church, plus the Jews usually had more money and items of value that the Church could confiscate.  I found it interesting that the Inquisition stayed in Mexico until 1820, long after it had been banished in Spain. Nowhere did I read that for this reason, Durán´s completed works were quietly sent to an archive in Madrid, Spain where their knowledge remained hidden for nearly three hundred years, but that may have been the reason the texts were not used as intended.

The works which Durán recorded “for the glory of God and The Blessed Virgin Mary, subject to correction by Mother Church,” were never used. Perhaps the Dominican Order was fearful of what might happen to their powers of Inquisition, or if they were simply mystified by the revelations. What is interesting is that even though the documents were safely secreted away in Madrid they were never forgotten.

A sad fact is that many of the drawings were cut out and pasted over some of the text, some of which can be read through the overlaying images. Scholars do not know what is missing, or where in the sequence some of the images were in the original codex, scholars use their knowledge of Aztec history and logic to determine the sequences of the paintings, but some of their assumptions could be incorrect.

I could not find an explanation as to why Durán´s codex was taken from Mexico, nor why it remained hidden until the mid-1800´s. I did read that the Emperor Maximillian was interested in the Aztec culture and that he knew of the Durán documents, but how had he learned of these supposedly secreted transcripts was not explained. If Maximillian knew, then why was the Aztec history hidden for several centuries? This perplexed me and I do not know if it was because of the presence of the Inquisition, or because no one really thought the works of any great importance. Who desecrated the original Durán codices also remains a mystery.