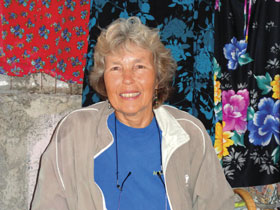 What would a week without Anita’s Animals be like? First, there would be a blank spot at the Wednesday Ajijic tianguis. This would be very unusual as Anita has been there faithfully for many years during the summer heat, winter cold, some days with [rain] down-pours and on all holidays.  People will not find a better place to gets used books, and a wide variety of clothing and household items  at very reasonable prices. Besides Anita being there, it is a place that has knowledgeable, caring volunteers who help people who might have questions about pets, community resources, etc. or who just want to chat – a sort of meeting place. Anita works 365 days/ per year and takes a three week vacation every 5-6  years.

More importantly, where will the rescued, sick or injured kittens, cats, puppies and dogs go that  she  would normally take in? Yes, there are other shelters who share the on-going work of taking in abused - abandoned animals. The hard reality is that all the lakeside shelters generally operate ‘at capacity’ during the entire year. To gain perspective of the loss of Anita’s presence even for one week, a head-count was made during a typical week. During the count week, these were the numbers: In-coming: 43 kittens, 12 adult cats, 31 puppies and 30 dogs! Now you may ask, why take them in? If she does not take them in, the  choices  will  remain:  stay on the street and starve, continue abuse,  die  of illness or injury or get  killed – not good  options. During this  same  week’s   count,  there  were  adoptions, that count was: 25 kittens, 12 adult  cats, 15 puppies   and 16 dogs.

Local town people or those who find an injured animal on a near-by road, who do not have transportation or the financial means to pay for Vet care come to Anita seeking help for animals. These animals require immediate care, transportation to a Vet, or a safe and caring place during an  animal’s  recovery period. One  such example was a sad one. Some drunken sob took a machete to a large female dog. She had a huge deep gash in the middle of  her  back from her  neck to her tail.  The person who found  this wounded dog along the road brought her to Anita for help. Anita got her to the Vet for immediate care, and paid for these services.  This girl remained with Anita for many months while Anita administered the necessary medications and provided wound care three times a day. The dog recovered physically and her soul was healed, so she would trust humans again. Anita then found her a loving home and caring parents.

Anita coordinates with a Jalisco State Vet who makes somewhat regular visits to Anita’s facility. During these scheduled visits, Anita contacts those people who ask for Anita’s help who live locally or on the far end and the opposite side of the lake who do not have access or finances for spay-neutering surgery for their animals. Anita helps with the animal’s transportation and pays part of these  medical costs.  Anita acts on the long view solution of the problem of pet over-population and the burden it places on all shelters. If you can help avoid unwanted  animal  births,  there is less of a crisis placed on the shelters. Sterilization  is a more humane approach, rather than facing the harsh reality when some people  use cruel  abandonment, poison or  other horrifying  means to eliminate unwanted animals  in their community. Before rumors start – Anita is not sick, she is not closing her sanctuary nor is she stopping her animal rescue work. This is just a reminder that Anita’s Animals needs your continued support via cash donations in person at the Wednesday tianguis or  web site www.anitasanimals.com  -  PayPal , so she can continue  to help this community with its abandoned-abused animals. Thank you!