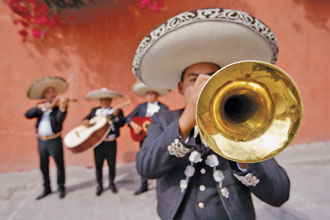 Mariachi music is said to have originated in Jalisco. As far back as the 1860’s, the music was played during wedding ceremonies. The French word for marriage is mariage, and as it was pronounced in Spanish, it sounded like “mariachi.” The music and the men who played it came to be called Mariachi, and in time would become symbols of machismo, and of Mexico and its music. Their costume today is that of a charro (cowboy), complete with a brace of six-shooters.

Musicians say it is not easy to become a mariachi, or to remain one. Only those of a certain mindset and heritage find it a rewarding life. Not everyone can do it. The music must come from a heart bursting with deep feelings.

But what about their instruments? Many were first brought to New Spain (as early Mexico was called) by Jesuit priests. Those first Indian instruments were of the wind whistle variety, drums, and but the simplest of one-string instruments. The missionaries taught the Indians to make and play more complex string instruments such as the harp and violin. They also taught them the choir singing which was the predominant form of music in Europe during that era.

Today, much of the music of Mexico is deeply rooted in its fables, myths and stories of the past. One such story concerned a young woman named Adelita. She was brave and beautiful and desperately in love with a certain sergeant. And so she followed him wherever he and his unit went. Sometimes, late at night, when Adelita was sound asleep, the sergeant would softly strum a guitar and sing of his love for her.

“If Adelita were to leave me for another man,
I would follow her over land and sea,
Over the sea by warship,
over land in a military train.

And if I die in battle,
and they are going to bury my body,
Adelita, I pray in God’s name that you will cry for me.”

The song sounds better in Spanish, with the shouting and the bugles. One can dance to it, drink to it, cry to it, or even fight right alongside it.

The tune is La Adelita, and it would become immensely popular during the time of the Mexican Revolution; whether there was ever an actual Adelita, her name came to signify the thousands of women who went to war with their man: riding the rails with him, her rifle blazing, or charging forward on her horse, pistolas blasting. Mariachi musicians who emerged from the revolution adopted La Adelita as their signature song, and today the tune is still a great favorite in every part of the Republic.

But Adelita was not the only woman of that era to be immortalized in song. There was also La Valentina and Marieta, two other bold women who had followed their men into war. Indeed, songs sprang from many surprising sources. Pancho Villa’s favorite horse inspired a ballad named after the animal. Another well-known tune was called La Cucaracha, named after Villa’s big black car. All of these songs became known as corridos, a name derived from the Spanish word “occurido” that signifies an actual event.

Like the minstrels of Europe, the Mexican musicians used to travel from town to town carrying news and gossip. Always they were asked what was happening elsewhere. Their musical replies came to be called corridos.

Today, new songs are written that present a different side of Mexican society. But it is the music of the mariachis that continues to hold a special place in the hearts of the Mexican people. Que Vivan Los Mariachis!