CANADA’S GREAT GIFTS TO THE CINEMA 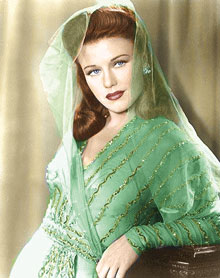 We Canucks have made major contributions to the celluloid world, and not only by inspiring Nelson Eddy to portray a Mountie in Rose Marie. The famed “America’s Sweetheart,” Mary Pickford, was born as lowly Gladys Smith in Toronto in 1893.

Raymond Burr who gave lawyers a good name in the Perry Mason TV series was born in New Westminster, British Columbia in 1917. Before playing the good guy in that series he was the heavy in the Alfred Hitchcock thriller Rear Window in 1954. Marie Dressler, perhaps the greatest movie comedienne of all time, was hatched as Leila von Koerber, in the mining town of Coburg, Ontario, in 1869. Deanna Durbin, one time a rival to Judy Garland, came from Winnipeg, Manitoba. Before retiring in 1948 at just 27 she had become the highest paid actress in the world.

Glenn Ford, christened Gwyllyn Ford in Quebec City in 1916, starred opposite Rita Hayworth in the fabled Gilda in 1946. Also born in Quebec, at Danville, was Mack Sennett, the producer and director whose movies featured such silent day comedians as Charlie Chaplin, Fatty Arbuckle, Mabel Normand and Chester Conklin.

Norma Shearer, who became known as The First Lady of the Screen, was born in Montreal in 1900. She would marry producer Irving Thalberg, who died tragically too young in 1936. Leslie Nielsen, son of a RCMP officer, was born in Regina, Saskatchewan, in 1926. He played in 101 Hollywood movies, including the Debbie Reynolds hit, Tammy, before achieving fame as a comedian in Airplane! in 1980. His brother, Erik, by the way, actually became deputy prime minister of Canada in the Brian Mulroney government.

Sex siren Yvonne DeCarlo hailed from Vancouver, B.C, and usually played a dance hall girl in westerns. She ended her career playing in the TV series The Munsters. Ruby Keeler, who married Al Jolson, was born in Halifax, Nova Scotia. Busby Berkeley, the greatest choreographer of all time, turned her into the biggest dancing star of her age.

Here’s a nugget few know: Louis B. Mayer, one of the three founders of MGM, spent his child hood in Saint John, New Brunswick, where his father was a junk dealer. Originally from Minsk, in Russia, the Mayer family left for North America to escape anti-Semitism.

Walter Huston, today best remembered for The Treasure of the Sierra Madre in which he co-starred with Humphrey Bogart, was born the son of a cabinet maker in Toronto in 1884. The movie was directed by his son, John Huston. Both would win Oscars in 1948. Edward Dmytryk, one of the “Hollywood Ten” and director of The Caine Mutiny and Raintree Country, was born the son of Ukrainian immigrants in Grand Forks, B.C., in 1908.

And to make all this more personal, I actually had a date with Ginger Rogers. It was at the National Press Club in Ottawa, and though she was a little heavier than when she danced with Fred Astaire, she was great fun to be with. Ginger Rogers was not the only movie actress I escorted on a date. In 1993, on the 60th anniversary of King Kong, I sat by Fay Wray’s side as the movie was screened once again in her hometown of Medicine Hat, Alberta.