ANYTHING YOU CAN DO
(they can do better!) 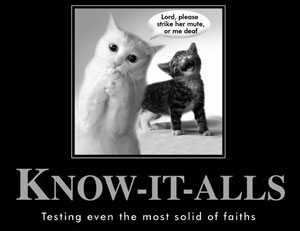 It may be a brother-in-law, next door neighbor or that particularly irritating high school bellicose bully who has badly gone to seed. You know the kind, those guys (and occasional woman) who, no matter what you say, are the “I can top that” sort!

Yesterday while flying home, trapped at an altitude of 39,000 feet, one sat next to me. Our (dare I call it such) conversation went somewhat as follows:

Knowing we would share common space for several hours I introduced myself and initiated casual communication with a light anecdote of how, just that morning prior to leaving for the airport, while playing with a friend’s puppy, it had nipped me.

That was my first mistake. His immediate response, several decibels louder than necessary, was that this was nothing. He, in fact – while helping Siegfried and Roy perfect their act a few years ago – had found himself alone in the large stage cage with four 800-pound Bengal Tigers that had tried to maul him. But, inasmuch as he understood and “spoke” Punjabi Tiger, he had communicated with them, established rapport, playfully wrestled with them for a while and then had calmly walked from the enclosure with them in a state of quiet, docile submission.

Mouth agape, pausing to ponder the sight, I changed topics recounting how much I’d enjoyed barbequed hamburgers, the evening before, with friends I’d been visiting.

He countered that he found traditional beef too bland and pedestrian, asserting that his favorite red meat dish was three month aged, Himalayan Yak flank filets - smoked over embers of slow burning Gumbo-Limbo, of the Central and South American Burseraceae family and which is related to frankincense and myrrh, spiced with (what those of lesser palates prefer on white meats) a sauce of Lemon Myrtle and Pepperberry.

A bit overwhelmed, I next commented how, the day before yesterday, I had shot what, for me, was a respectable round of golf.

He responded that, following a 72-hole round in which he had shot six holes in one, he’d found the PGA no longer challenging and only dabbled in the sport when Tiger Woods, Steve Stricker, Phil Mickelson and Ernie Els ask for his personal counsel and advice – which he assured me they did weekly.

Feeling a bit deflated, I next offered that I planned to soon commence taking tennis lessons.

He tersely responded that such sport was “too tame and unchallenging” and preferred sky boarding from 27,000 feet clad only in a velour codpiece.

Nearly choking on the mental image of his substantial – near 300 pounds - girth so attired, I hastened on to what I thought might be an area of common interest, mentioning how my wife Patty and I had last month found a wonderful week-end retreat.

In the vein of finding things, his response was how, only recently, he had discovered a new galaxy from the Mauna Kea Observatory; while coaching Fabien Cousteau had discovered four, heretofore unknown species of fish living at an ocean depth of 5,000 feet in the Mariana Trench and found satisfaction in tutoring a previously unknown tribe of primitive pygmies in the bowels of the Brazilian Rain Forest on use of the internet.

At this point, desperate to find a topic of discussion on which we might have a modicum of parity, I grasped at the fact that, as a youth, I had enjoyed flying kites.

He curtly replied that he tended to “play” at a bit higher elevation inasmuch as he had trained, taught and tutored the entirety of the multi-nation crews for the last eight space shuttles and was the primary consultant for NASA’s planning of a Mars mission.

Numb by this time, I stumbled on to how I had enjoyed playing basketball as a kid.

Scoffing, he told me that he regularly counseled the University of North Carolina’s coach, Roy Williams, sat behind the LA Lakers team bench at all home games, and how his great grandfather had actually been the one to tell Dr. James Naismith how to affix fruit baskets to the wall, hence creating the sport in the first place.

Stammering, I then shared our hope to soon get a Labrador Retriever pup.

He rejoined that he had mastered effective two-way communication with a pet lowland gorilla that shared its housing with an exceptional and uncommon white Asian elephant and a Siberian Musk Ox. And then, as an afterthought, he added how much his Costa Rican Sloth and Dingo from Thailand enjoyed riding the back of his Cyprus Dwarf hippopotamus.

And then the jet, in which I sat trapped, pulled away from the terminal, began to taxi, heading for take off.

(Next issue – the conversation continues.)