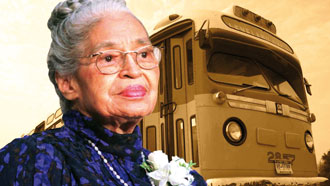 Rosa Louise McCauley Parks died on October 24, 2005, in Detroit. She was ninety-two years old. On rare occasions, the earth seems to slow on its axis or even come to a complete standstill. The death of the humble, self-effacing seamstress from Alabama brought forth one of those occasions. Rosa’s coffin was flown to Montgomery on October 29 and taken in a horse-drawn carriage to her old church, St. Paul African Methodist Episcopal, where she lay in repose at the altar dressed in the uniform of a church deaconess.

A memorial service was held the next morning in the church, and one of the speakers, Secretary of State Condoleezza Rice, an Alabama native, said, “I can honestly say that without Mrs. Parks, I probably would not be standing here today as Secretary of State.”

Her coffin was then flown to Washington, D.C., where it lay in honor in the U.S. Capitol Rotunda on October 31; Rosa was the thirty-first person, the first woman, and the second African American to be so honored in our nation’s history. Her funeral service was held in Detroit on November 2, and thousands of people turned out to watch the horse-drawn hearse carry her to the cemetery. Rosa was buried between her husband and mother under a headstone she had earlier selected and prepared. It reads simply, “Wife, Rosa L. Parks, 1913—.”

All the accolades and tributes paid to Rosa in the last years of her life and at her memorial services prior to being buried in Detroit pale when compared to one event in 1990 that illustrates the true measure of the woman and the impact she had on the world stage.

After the first multi-ethnic elections in the country’s history, he would serve as president of the Republic of South Africa from 1994 to 1999. It was truly a remarkable achievement after so many years of oppressive governance, with the threat of racial violence a constant concern. The strength of character, leadership, and forgiveness Mandela demonstrated in this crucial transition has made him a beloved and revered figure worldwide.

After Mandela was released from prison, one of the first things he did was to visit the United States to bolster his ties with our government and people as he prepared to face the daunting tasks ahead in South Africa. One of the cities on his itinerary was Detroit. The city, wanting to roll out the red carpet for Mandela, invited a number of local business, religious, and political leaders to join the welcoming group at the airport the day Mandela was to arrive.

A good friend of Rosa’s noted her name was not on the list, and she told Rosa she would see that she was invited. Although Rosa admired Mandela and had followed his entire career as an activist and prisoner, she told her friend not to bother: “I just shouldn’t be there. It’s okay. They just forgot me.” The woman persisted, and, after some additional arm-twisting with the committee, Rosa was invited to join the group. Even as she was being escorted to the airport to greet Mandela, she kept telling her friends, “He won’t know me.”

Seventy-one-year-old Mandela and seventy-seven-year-old Rosa fell into each other’s arms, embracing and weeping, not tears of sadness, but tears of understanding that only these two icons of the civil and human rights struggle on two continents could comprehend.

*An excerpt from the book Our Southern Home: Scottsboro to Montgomery to Birmingham—The Transformation of the South in the Twentieth Century by Waights Taylor Jr.

Ed. Note: Some months ago, Mr. Taylor visited Lakeside and came to a meeting of the Ajijic Writers Group, where he read the foregoing except from his highly-celebrated book. To say that his reading was well-received is little short of a gross understatement.