HIGH NOON – And the Hollywood Blacklist 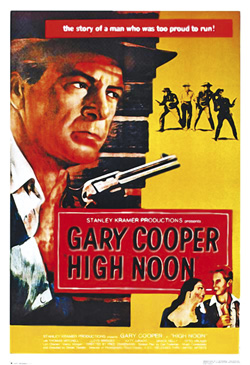 High Noon, one of the most beloved and iconic Westerns of all time, now over 60 years old, earned its place in history by portraying one of the most human dilemmas: caught in a struggle of conscience and desire the triumph of the human will – courage over adversity. But High Noon was not pro-typical of the Western genre; it was more a ‘morality play that just happened to be universal.’

Here is a brief synopsis of the story: Former Marshall Will Kane (Gary Cooper) is preparing to leave the small town of Hadleyville, New Mexico, with his new bride, Amy (Grace Kelly), when he learns that local criminal Frank Miller has been set free and is coming on the noon train to seek revenge on the Marshall who turned him in years before. When he attempts to recruit deputies to fight Miller and his gang, he finds the people of Hadleyville unwilling to support him and Kane must fight the gang alone.

Back in 1951, four great talents converged to form a remarkable collaboration- namely Gary Cooper, actor; Stanley Kramer, producer; Carl Foreman, script-writer; and Fred Zinneman, director. Kramer and Foreman were friends who had recently had huge success with low budget films. Kramer bought the rights to a Western novel- The Tin Star- which Foreman adapted to his screenplay.

Cooper read the script and knew the part was perfect for him. Production commenced, but power and politics made their entry and this cinematic landmark was almost sunk. America was at the height of the Cold War; it was the McCarthy era, and the fear of Communism was rampant: sinister circumstances would plunge the production into jeopardy.

Carl Foreman, a most sought after script-writer, had been a member of the Communist Party earlier, but he had quit when he joined the army in 1943. The House Committee on Un-American Activities (H.U.A.C.) was in full swing: their witch-hunts were relentless. Any suspicion surrounding film industry workers brought them before the H.U.A.C. and halfway through filming, Foreman was subpoenaed to appear before the committee. Foreman’s script, unbeknownst to the Committee, which was revealed when the movie was released, was in fact an allegory about the Hollywood blacklist- -the elements of cowardice, betrayal and fear permeate the story. Foreman knew what to expect: witnesses were pressured to renounce their affiliation, and, to prove their loyalty, they were coerced to name associates in the alleged Red plot to harm America. Foreman was no snitch- he pleaded the 5th Amendment, but he was black-listed as a result; he would never work in Hollywood again. Cary Cooper and Fred Zinneman stood by him, but, Kramer, the producer, was worried and tried to have him fired. The friendship was over. They never spoke to each other again.

The movie was a great success, winning four academy awards, one to Cooper and, ironically, a nomination for Foreman for his script. There were some critics however; John Wayne, the ultra -conservative, who was known to have made racist statements said. “It is the most Un-American thing I have ever seen.” He smelled out the subversive politics lurking in the picture’s soul, but seemed to ignore, or failed to understand, the emotional, moral and societal depth never before seen in the Western genre.

The black-list would be the ruin of many in Hollywood during the 1950’s - hundreds of people found themselves out of work for years; there were several suicides.

The film launched the careers of two other notable actors: Katy Jurado, the Mexican actress, with her deep sensuality, won a Golden Globe Award for her role; she would become one of Mexico’s most famous actresses; and Grace Kelly, who had a successful career before becoming Princess Grace of Monaco.

Stanley Kramer would continue to make many more award-winning movies including Inherit the Wind and Judgement at Nuremberg. As for Carl Foreman, he savored the final irony: he went to work in England, and years later, he was awarded an Academy Award for co- scripting David Lean’s The Bridge on the River Kwai.

High Noon was a classic milestone in Cinema; it is a simple plot yet a story whose message of triumph over adversity, courage over cowardice, victory over the vanquished, make it an inspiration for all mankind. It is the most watched movie by American Presidents since Eisenhower.