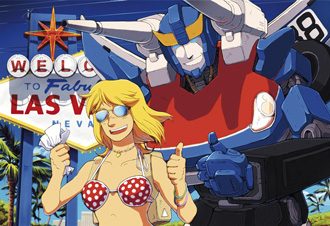 Over the years, many catch-names have been given to the town I now call home. Of them all, Sin City seems to be the one that has stuck. My favorite has always been “Lost Wages” which seems to say it all. As the city grows by leaps and bounds, Glitter Gulch of the 40’s is but a memory. The myth of Las Vegas continues as the P.R. Dept tries to convince one and all that when it is 110 degrees in the shade, it is a “dry” heat.  If you believe that I have a bridge in Brooklyn that is for sale.

The Spanish translation of Las Vegas is The Meadows but any meadows that were here have long ago been covered over by a mega resort. Just when you think the construction is finished they tear up the streets and begin again. The hotels seem to pop up overnight. When revenues are down the bigwigs get together and decide the only solution is to build another resort. That’s called Vegas Logic.

Sin City is a complete state of mind. Where else can Joe Construction become Donald Trump for a weekend? The illusion continues as your “lucky” slot machine rings bells and mimics the sound of coins dropping into a bucket as a slip of paper is spit out that you redeem at the cashier’s cage. The fact that you have won a mere fraction of what you bet escapes you as you clutch your winning voucher. Welcome to Fantasy Land.

All the one-armed bandits take cash only now and for a very good reason. It allows management to track your wagering. You probably thought there were only cameras in the ceilings, not so. That blinking light over the machine you have taken residence at has an eye on you as long as you sit there. As I often remind my gullible friends, mega resorts weren’t built on visitors winning. Think about it.

As in the movie Ocean’s Eleven, the head honchos know what is going on in their hotels at all times.  Recently a friend came to town on a gambling junket. Straight out of Smalltown U.S.A., he proceeded to overindulge and spent a good part of the day sleeping it off.  That evening two gentlemen in dark suits appeared at his door to inquire when he might be heading down to the casino to place a bet. Apparently a certain amount of wagering is required when you are on their dime.

Did you ever notice there are no windows in the casinos, bars and restaurants? For a very good reason. Get ‘em in and keep ‘em in is the motto here.  There could be a tornado raging outside and you would be none the wiser. After eating breakfast at 2am and possibly lunch at 8pm, you are lucky (no pun intended) if you can remember your own name. Caution, should you wander into one of our finer dining establishments and there are no prices on the menus or even no menus, run, don’t walk to the nearest exit. A sandwich could end up costing you a crisp hundred dollar bill—but, the service was excellent, right?

With all its new-found class and style, Vegas still has some antiquated laws on the books.  Case in point: It is perfectly legal to carry a gun as long as it isn’t concealed. On the other hand, it can be an arresting offense to carry a glass container on the Strip on New Year’s Eve. A loaded six-shooter on your hip is cool but a beer bottle could get you dragged off to the pokey. Prostitution is also legal in some counties of Nevada but, thankfully not the one I live in.  Tell that to the ladies-of-the-night who hang around the posh resorts.

Currently we locals are anxiously awaiting a big event.  A vacant post office downtown is being converted into a museum to showcase, what else, the Mob.  I am told such items as portions of the brick wall from the St Valentine’s Day massacre and the blood-stained suit of Bugsy Siegel will be on display. An interesting little known fact: When Bugsy was overseeing the construction of the Flamingo Hotel in the late 40’s, he was paranoid about the Mob discovering he was stealing from them so he had secret tunnels dug underneath the basement. No doubt to facilitate a hasty escape should the need arise.

Too bad he didn’t have something like that in Beverly Hills when they gunned him down. I recently was offered a tour of the tunnels but my claustrophobia declined.

As mayors go, ours is straight out of a True Crime magazine. He fits Sin City like a glove, having been an attorney for the Mob for years, which he proudly admits to. His favorite thing to do is to be photographed with a bevy of showgirls on his arm and a martini glass in hand. An ex-exotic dancer and a suspected murderer round out the prior list of elected officials of whom we are most proud.

A while back a friend popped into town to get married and as it was her fourth attempt at wedded bliss, she didn’t feel a fuss was necessary so they opted for one of our colorful drive-thru chapels. There really are such places, complete with menus so the happy couple can pick and choose which service best fits their needs.  As I sat in the back of their SUV as their witness I was tempted to holler out “Make mine a cheeseburger with a large fries.” Something for everyone in good old Glitter Gulch.

But credit must be given where credit is due. There is no greater thrill than sitting atop the Eiffel tower (half-scale of the original) at the Paris Hotel as you watch the dancing fountains across the boulevard at the Bellagio Hotel swaying to the tune of “My Way” by Frankie. In the distance can be heard the rumble of the erupting volcano at the Mirage Hotel.  Is this Fantasy Land or what?

As you head out of town there is a 7/11 store on the right with a sign out front which simply says “free aspirin.”  Take it as it is the last free thing my town will offer you as you head for the nearest pawn shop for gas money to get home.

Our Chamber Of Commerce estimates that 78% of those who visit our fair city will return and that you can bet on. Glitter Gulch Awaits.

*Ed. Note: Margie was a Lakeside resident for many years, and a major contributor to our magazine. She now lives in Las Vegas. 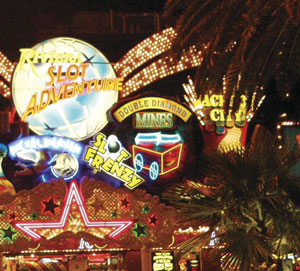 Glitter Gulch - October 2010
Glitter Gulch By Margie Harrell   Over the years, many catch-names have been given to the town I now call home. Of them all, Sin City seems to