The Fine Art Of Living Well 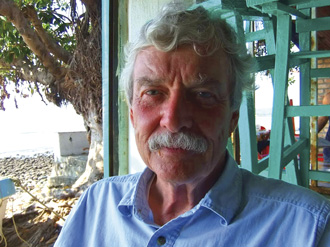 It may not be immediately obvious, but there is a strong thread that ties together the seemingly disparate careers and interests of Lakeside Renaissance man Rob Mohr.

It’s all about living the creative life.

Whether he is excelling as a painter in New York’s endlessly competitive art scene, doing groundbreaking work with an NGO in Latin America, pursuing a successful career in architecture, managing the family farm, or writing a long-running column (Focus on Art) for El Ojo del Lago, Mohr’s curiosity and creativity are the driving factors, he explains.

“When I think and act creatively, my life has meaning and focus. That has been true from childhood until today,” he said. “The only life that is important to me is my creative life, painting and writing, and how these dovetailed into a whole with my wife, Bonnie.”

Notably, one of those pursuits was the soft-spoken North Carolina native’s work in creating Children as Agents of Change, a program adopted by NGOs worldwide. Building on his years of experience working in international development throughout Latin America, including a stint in the Peace Corps, he realized that critical public health programs that trained adults to educate their communities about disease prevention were falling short.

Mohr’s creative solution? Teach children, ages 10 to 14, to tackle the task – and, not surprisingly, use the arts as one tool in the training regimen. The Children as Agents of Change program that grew out of that insight continues today and has improved the lives of countless people in underdeveloped nations around the globe. Along the way, Mohr’s emphasis on “non-formal education” in working with the youngsters placed him at the cutting edge of the pedagogical approaches in the developing world

On most résumés, that might be a crowning touch. But Mohr’s apparently bottomless curiosity and desire to learn have kept him taking on new challenges at every turn. He rehabilitated and managed his family’s 3,000-acre farm. He wanted to learn to fly, so he built an airstrip on his land and became a crop duster, a piece of his life he holds dear. He worked as an architect and saw one of the homes he designed featured in Southern Living magazine. He was part of a Maya studies team credited with deciphering a major section of the list of Palenque kings.

And, always, there has been the art itself – as a creator, a teacher, and a critic. At various times, he was a Manhattan-based painter, Artist-in-Residence at the University of Georgia, a faculty member at other universities, and a critic for U.S. art publications as well as, as many readers know, for this magazine. Early on, he even left an indelible mark on 20th century art history, when he curated the first exhibition of works by important artists associated with the then-closing Black Mountain College.

The experimental artist-owned college, located near Mohr’s native Asheville, was the storied incubator for cutting-edge works across artistic disciplines, including painting, music, dance, poetry, and more. The list of visual artists alone is a Who’s Who of the mid-century art world, including Josef and Anni Albers, Robert Motherwell, Robert Rauschenberg, and Willem and Elaine de Kooning.

At Lakeside, however, it’s literary pursuits that are at the center of Mohr’s creative life. In addition to his column in El Ojo, he is currently at work on a novel and is a prolific poet whose publication credits include the book, Shadow Love.

“My whole life has been a creative adventure, filled with the joy of learning how to do many things well,” he sums up now. “But at the center, friends and those I love are the core. Gaining understanding of what love is has been a constant as well, and seeing the value of being part of a loving family from birth to now. . .

“But,” he added, after a moment’s reflection, “loving a good woman is way up there among my greatest achievements, too.”

He is currently enjoying life and love to the fullest here in Ajijic with his wife, Bonnie.