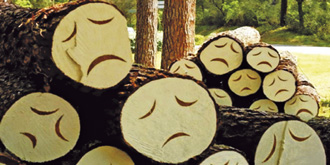 There are some experiences that are imprinted indelibly upon our consciousness and endure forever. It was one of those hazy, lazy midsummer days, with the sun beating down upon the pastures and woodlots of rural northern Ohio, one of those bucolic days when, in our youthful innocence, we somehow assumed that nothing could ever go wrong.

My friends and I had a favorite fishing spot, located on the fence-line between a small wood and carefully cultivated fields of wheat, alfalfa, corn and oats, a deep, silent pool on a stream that was officially named Lang’s Creek on the maps but was always referred to by us as simply the First Creek. It was formed by the confluence of two forested streams on the farm of a man named Lang and extended out into a pasture where Holstein cattle grazed contentedly through warm summer days.

Then one warm July day, a fishing buddy and I arrived at the stream bank and found a scene of barbarism, waste and cruelty until then unknown to us. The usually pristine place was littered with candy wrappers, crumpled beer cans, empty packs of Pall Mall cigarettes. Two campfires had been left smoldering unattended all night. Worse yet, and far more savage, dozens of fish had been cast onto the bank and allowed to asphyxiate. There were smallmouth bass of all sizes, bluegills and other sunfish, red-horse suckers, rock bass, catfish, all dead and gone to waste.

A psychopath is a person who experiences elation from acts of cruelty and destruction, finds fulfillment in the disappointments and sufferings of others.

Perhaps the men who desecrated our favorite fishing spot were of that sort. There was no justification for their deeds. On that day, we learned that adults could exhibit sheer evil, engage upon a program of destruction, like the berserkers of old, for no reason whatsoever. We never did learn who they were or why they had behaved in such a wantonly destructive manner.

Bad as it was, the consequences of the human impulse to destruction we observed on that faraway day were a mere microcosm of the outrages perpetrated by the Trump administration today. President Trump, his EPA administrator Scott Pruitt, and his Interior Secretary Ryan Zinke manage to come down on the wrong side of every issue affecting the environment, the side that will bring about the greatest destruction. In fact, the Trump administration has advanced the most extreme anti-environment agenda in the history of the United States.

Of late, the press had been focused upon this unholy triumvirate’s current plans to shrink the boundaries of several national monuments, including Bears Ears in Utah, Gold Butte in Montana, Cascade-Siskiyou in Oregon, Rio Grande del Norte in New Mexico, Organ Mountains-Desert Peaks in New Mexico, and Katahdin Woods and Waters in Maine.

This latter act of thievery may involve additional legal complexities, in that the proprietor of the Burt’s Bees Honey Company had donated a large parcel of the land comprising the Maine site. Such shrinkage would potentially open fragile landscapes to uranium mining, timber cutting, livestock grazing and drilling and fracking for oil and natural gas. Mr. Trump’s program of wreckage even extends to undersea sites, such as the Atlantic Ocean’s Northeast Canyons and Seamounts and the Pacific’s Rose Atoll Marine National Monument. In all probability, the worst is yet to come.

Rather than prioritizing the protection of public lands and wildlife, Trump insists upon handing them over to polluters, climate change deniers, the coal industry and anti-conservationists. To further his plans, he has named those with histories of corporate pollution to key cabinet posts in his administration and severely cut the budget of the Environmental Protection Agency.

The administration has weakened or eliminated air and water quality protections, placing public health at risk, approved the Keystone XL pipeline for the transportation of dirty oil, and repealed the ban on offshore gas and oil drilling along the Atlantic coast, placing sound sensitive dolphins and whales at risk, and in the even more fragile Arctic Ocean, where resources for ameliorating the consequences of an oil spill are non-existent. He and his acolytes have now rammed through legislation opening the pristine Arctic National Wildlife Refuge to desecration by oil companies.

Republican congressman Bob Bishop of Utah has introduced five bills to weaken or dismantle the Endangered Species Act, which has been such a huge factor in bringing back the bald eagle, the gray wolf and other creatures from the brink of extinction.

Many of these actions, particularly with regard to contracting the boundaries of national monuments, are soon to be fought out in the courts, as the Natural Resources Defense Council and other environmental and public advocacy organizations file a barrage of suits, but the oil, gas and coal industries have unlimited funds to spend on lobbying in the halls of Congress and with which to fill the campaign chests of “friendly” congressmen seeking re-election.

In the aftermath of the 2010 Deepwater Horizon explosion that killed eleven men and befouled the Gulf of Mexico with one of the world’s worst oil spills, new rules were imposed requiring more frequent inspections and better monitoring of highly complex wells. Mr. Trump has now killed those rules, arguing that they are “Unduly burdensome on oil and gas operators.”

While attempts to justify the stripping of environmental and public health protections are fueled by the endless mantra of, “Jobs! Jobs! Jobs!” the real goal is to enrich the death merchants of the energy industry. No one who has experienced the anxieties and deprivations of unemployment or the accompanying miasma of underemployment should ever trivialize the lack of self-sustaining career options.

However, the creation of jobs alone does not justify destruction of the environment. One can no more argue justly for weakening protections against air and water pollution, deforestation, overgrazing, or threats to ocean life in order to create jobs than one can argue that medical research and auto safety requirements be eliminated because highway fatalities and cancer provide jobs for morticians and grave diggers.

Some things are just never quite the same again, and it seemed that the old First Creek never fully recovered from the predations of those long ago vandals. Years passed, and in the late 1960’s a tank truck overturned on a nearby highway, spilling thousands of gallons of fuel oil into a roadside ditch that emptied into one of the two woodland tributaries of the Creek. The loss of aquatic life extended all the way downstream to the creek’s confluence with the Jerome Fork of the Mohican River, and the local press reported thousands of dead fish. The Ohio Department of Natural Resources charged the trucking company for the loss of fish, but there were never any reports of the stream being restocked.

A few years ago, I revisited the creek, wandering its boyhood haunted banks and casting into its once again pristine waters with my fly rod. I encountered only snapping turtles, rough fish like carp, and snakes.

There are many kinds of snakes. Some walk on two legs and exhibit all the symptoms of psychopathology. In the Gospels, we are told that an angry Jesus drove out the money changers who were defiling the Temple in Jerusalem with their greed and clatter. John Muir observed that man made cathedrals, beautiful as they may be, pale in comparison to those constructed by the Creator himself. The time has come to drive our modern money changers out of the Creator’s Temple. 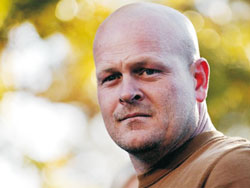 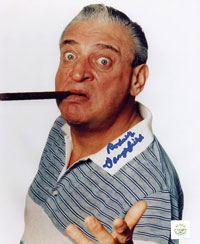