The Aztec Way Of Poetry 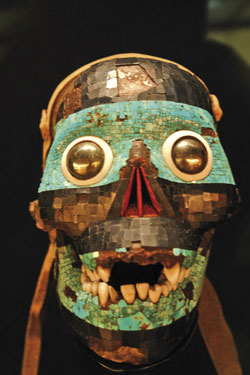 The Aztecs of Mexico have gained a bad reputation for their practice of mass human sacrifice. The Franciscans who arrived in New Spain around the time of the Spanish Conquest of the Aztec capital of Tenochtitlan in 1521 were horrified by what they regarded as an abomination of the Devil. But to the Aztecs it made perfectly good sense: human blood was required by the gods to ensure the survival of the universe. Whatever we might think today of such beliefs and practices, there was another quite different side to the Aztec character: the way of poetry through flowers and songs.

The Nahuatl spoken by the Aztecs at the time of the Conquest was a rich language with a copious vocabulary capable not only of expressing the vast store of native literature but the new religious concepts brought in by the Franciscans. In its classical form, as it was spoken in Mexico-Tenochtitlan, Nahuatl was a superb vehicle of high literary expression and resounding rhetoric.

The history of Nahuatl literature may be divided into two periods: prehispanic and Spanish Colonial. Down to the time of the Conquest three types of Nahuatl poetry flourished: epic, dramatic, and lyric. Most of the genuine native literature was destroyed during the Conquest, except for later compositions in Nahuatl under Spanish Colonial influence. However, enough has survived to give us a good idea of its form and content. The authenticity of the surviving Nahuatl poetry is guaranteed by many parallel studies of Mesoamerican art and archaeology.

Nahuatl poetry has a definite rhythmical regularity but does not follow a rigid or fixed metrical pattern; rather it is characterized by groups of syllables and the repetition of phrases and sentiments (e.g. “Where the eagle raises itself up/where the eagle screeches/where the eagle feeds...”). Also very common are parallel phrases, or semantic couplets, where the second half echoes the sentiment or general meaning of the first half. For example, “I have come/I am standing here...” (from a poem by Temilotzin of Tlatelolco).

This structural feature is also characteristic of the Hebraic poetry of the Old Testament. Very common too is the coupling of two words to form a third meaning, such as ‘in atl, in tepetl’ (water, hill = city) or ‘in atl, in chimalli’ (arrow, shield = war). This construction is also used to form the names of gods, such as Tloque, Nahuaque (“He who is near and close by,” ie. sun or god in general).

Stylistically, Nahuatl poetry is elaborate and highly polished. Examples of poetic diction include such phrases as ‘in chimalli xochitl’ (flowers of the shield) or ‘xockihuehuetl’ (the flowery drum). In the 16th century Fray Bernardino de Sahagun recorded twenty hymns addressed to Aztec gods in this highly stylized poetic diction. Believing them to be the work of the devil, the pious Franciscan did not translate them, leaving it to present day scholars to unravel the complex metaphors and the archaic diction of these poems. The addition of otherwise meaningless syllables, such as ‘Ohuaya’ or ‘Yehuaya’ at the end of lines in many poems, probably indicates some kind of musical accompaniment to the singing or chanting of the poems.

In content Nahuatl poetry is largely religious or metaphysical, although other types are found. Some idea of the themes dealt with by Aztec poets may be gleaned from their literary classification, for example, “Songs of Warriors” (Yaocuicatl), “Songs of Princes or Chieftains” (Teuccuicatl), “Flowery Songs” (Xochicuicatl), “Songs of Desolation or Adversity” (Icnocuicatl). For the all-powerful Aztecs war was always a favorite theme. In some of the war poems are miniature epics with heroic themes worthy of the great Indo-European epics, such as the Greek Iliad or the Indian Mahabharata. One such poem begins: “The city endures surrounded by circles of jade...” and goes on to invoke the protective deity of Mexico-TenochtitIan, here referred to as Ipalnemohuani (literally, “He through whom everyone lives”). The god comes flying toward the city in the guise of a blue heron, the totemic symbol of the Aztecs, who were said to have come from Aztlan (“The Place of Herons”).

The Aztec concept of poetry is summed up in the phrase: in xochitl, in cuicatl (“the flower, the song”). In Aztec thought this metaphor meant not only poetry but art and symbolism in general. In 1490, according to one old Nahuatl manuscript, Tecayehuatzin, Prince of Huexotzinco, an independent city-state in Puebla, summoned poets and wise men to his house to discuss the meaning of true poetry. The invited guests express many different views. One thinks that through flowers and songs one can thereby invoke the “Giver of Life.” Another doubts not only the reality of art but the very existence of human beings on the earth. During the dialogue Tecayehuatzin asks: “Flowers and songs, or, it may be art and poetry; is this perhaps the only truth here on earth? Or perhaps flower and song are the only means of expressing true words.”

The issue is still in doubt. But finally the host has the last word, expressing a sentiment with which all can agree. As in the “words of a dream” (“...itlatol tenrctli.”), he declares, the discussion of poetry, flower, and song at least brings old friends together again.

Today poetry has lost much of its influence in the world but it is still of great importance, for through it we can enter the minds and the hearts of other peoples in other places at other times--including the supposedly bloodthirsty Aztecs. It is difficult to define poetry, because fashions change with time and circumstances; but, if we as listeners or readers can avoid the extremes of praise or blame and our ears and minds are attuned to it, true poetry will strike a chord. Perhaps old Tecayehuatzin was on the right track after all.

If you happen to visit the National Museum in Mexico City and you too are horrified by reconstructions of the tzompantlis, or skull racks, upon which the ancient Aztecs used to hang the heads of sacrificial victims, think kindly of that gentle band of poet-philosophers who, some thirty-one years before the holocaust of the Spanish Conquest and the advent of European “civilization” gathered together as old friends to contemplate the meaning of flower and song, art, and symbolism.