The Magic of Famous People Players Comes to Lakeside 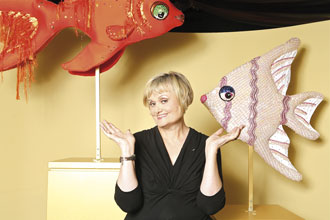 “What you see is sensational…What you don’t see is inspirational.”  Diane Dupuy

Black light puppetry is a very special and magical art, and the world-renowned and superbly talented Famous People Players have been working their magic for 44 year. Dressed in black from head to toe and illuminated by black light, the players are invisible while manipulating glow-in-the-dark puppets of famous people like Liberace and Elvis Presley or wonderful, fantastical creatures of land, sea and air.  And they’re bringing their magic to Lakeside in March with special fundraising performances for the School for Special Children.

It all began when Diane Dupuy, the company’s founder, was being bullied at school because of her ADHD (attention-deficit hyperactivity disorder).  To lighten her spirits, her mother made her some puppets and she began to perform with them.  Creating a show for children with disabilities and her discovery of black light theatre led to the formation of Famous People Players in 1974. What appealed to Diane most about black light theatre is that the players’ invisibility means that they are judged solely on their performance.  The audience is totally caught up in the colors, music, movement and the skill of the players.  All of the members of Famous People Players have disabilities.

An early show featured Liberace.  He saw them perform and was so flabbergasted that he booked them on the spot to open his show in Las Vegas. It was truly the stuff dreams are made of.  And they went, they succeeded and they performed with Liberace for 10 astonishing years, both in Las Vegas and around the world. 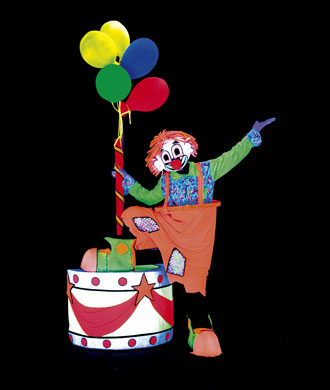 Next came two runs on Broadway, along with performances in China, where they were the first foreign company to perform, as well as Korea, Singapore and the United States.

After two decades of constant touring, the troupe began to raise funds for its Dine and Dream Theatre in Toronto. Actor Paul Newman fell under their spell and contributed generously to their new home. He was not their only famous admirer.  Phil Collins provided financing for the theatre’s sound system, and singer Anne Murray was also a generous contributor. They are a non-profit organization and have never received government funding.

Theirs is a remarkable story and Famous People Players have been featured in numerous talk shows, specials and documentaries, including the CBS movie Special People about the founding of the company. Famous People Players celebrated Canada’s 150th anniversary in 2017 with “Made in Canada” narrated by Dan Aykroyd.  The company also branched out last year by introducing a program to include international students.

The company has become so much more than a group of talented performers.  In addition to their professional success, they raised millions of dollars for their restaurant and theatre and continue to break down barriers and make significant headway in reducing the stigma attached to intellectual and developmental disabilities.  They inspire people to achieve more, while making their own dreams come true.

Diane was awarded the Order of Canada in 1982 and the Queen’s Jubilee Medal for her work in the theatre and dedication to the integration of people with disabilities. She has received five honorary degrees and is an outstanding motivational speaker.  Her daughter Joanne has stepped into her shoes as Artistic Director, and Diane continues to write, speak and act as international advocate for people with disabilities.

Everyone in the company learns to work in all aspects of the Dine and Dream Theatre:  performing, props, cooking, waiting, administration and so on.  As Diane has said:  “It’s their company, their home, they run it.  It’s a journey that I treasure with my whole heart and soul -- I just love it!” 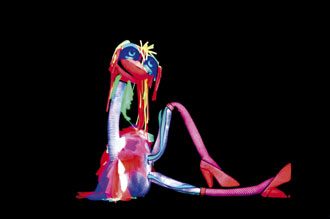 Their patrons love it too.  One said after a visit that: “Amazing doesn’t do it justice.  The chicken was mouth-watering and the show wow to say the least.”  Another enthused that the acts were clever, yet ingeniously simple, the music was fun and the imagery very engaging. A great evening for all ages especially if you’re imaginative and enjoy having your sense of wonder tantalized.”  Someone else said after a visit: “Incredible! What a way to break boundaries!” And another regular customer said: “We come in with a smile and leave with an even bigger one from being part of this unique experience.”

While some of the puppets fit over a hand, some are 10 to 15 feet tall and take four puppeteers to manipulate.  The skill it takes to manage that in total darkness is extraordinary. The colours are vibrant, funny and lifelike, and the choreography is outstanding. Their music is all familiar and appeals to adults and children alike.  They promise their audience to make their eyes pop, their ears pop and that we won’t hear a pin drop or catch our breath until the show stops.

Thirteen members of the company are coming down to Lakeside in March.  Although they’ve  travelled all over the world, this will be their first visit to Mexico and they are very much looking forward to spending time in our village on the lake.  In addition to performing two fundraising concerts, they will also put on a special show for The School for Special Children, including their families, faculty and special guests.

Come and be part of the magic of Famous People Players on March 6th and March 7th at 7:30 p.m. Ticket prices are 400 pesos for a center seat and 350 pesos for the side seats. Tickets will be sold at the Ajijic Auditorio box office.  Be sure to buy yours now. They will go quickly.