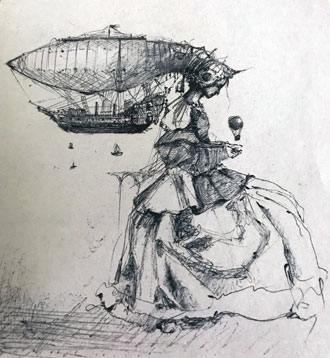 “I dream of painting and then I paint my dream.” —Vincent Van Gogh

Fine Art is not always what we expect. During my first interview with Ricky Granna I felt a strong sense of deja vu as we talked and explored his remarkable figurative works ripe with psychological, symbolic, and metaphorical overtones that forced me to reflect on the meaning of art today. Each of his subtle and complex paintings evoked a sense of mystery and wonder. They inculcate Renaissance, and Baroque understandings, but his unique vision distinguishes his paintings as cutting edge, contemporary art.

His deft drawings are provocative. Some are finished works while others, equally well executed, are compositional sketches for his larger paintings. In each, his refined compositions, mature understanding of color and consummate ability to draw are evident, and give birth to a rich journey through art history, one filled with endless surprises, creative illusions, and storied fantasies awash with juxtapositions of space and time, and inventive thought provoking passages.

They engage viewers as Leonardo da Vinci’s imaginative works have done for centuries. They alter perception, offer escape from today’s ugly realities, enable encounters with the unknown, journeys into other ages - awaken genetic memories, and universal consciousness. We are mystically drawn into an ambrosial space where sensuality dominates - sight, insight, sounds and smells all are encapsulated in a previously unknown, never experienced world the artist has created to delight our spiritual and mental core.

His drawing of a seated woman dressed in a 16th century frock, with hair enclosed in a hennin typical of the age, which has been transformed into a lighter than air craft propelled by sails, is one of several done as part of the conceptual stage in the development of a painting. The seated, well-dressed lady, clearly wealthy, is launching a small balloon with her hands, which suggests new birth while the larger craft attached to her head is mature presence. These, plus several small craft floating in the space around her, exist beyond the realm of possibility.

Not surreal, but more a unique mixing of elements from various historic times in a conceptual framework that is both visually and mentally challenging. The drawing is both reality and fantasy in the same moment. The line qualities—variation, movement, length and width, dark and light—demonstrate Ricky’s consummate skill with pencil and pen, and reflect his love of drawings done by Rembrandt (1606 -1669), and Leonardo da Vinci (1452 - 1519).

From these preliminary drawings, Ricky, a child of the electronic, digital age - collocates a mockup of a finished painting using Adobe Photoshop, where through a creative process, the components of the work, complete with historic details and colors, are assembled and placed within a frame. Guided by this Photoshop image, Ricky uses his scaled T-square and ruler to draw a large scale copy on a primed canvas.  He then begins painting the actual painting with the sensitivity of an accomplished artist. Each stage of the process entails creative changes that enhance and give life to the original concept.

In the manner of Caravaggio (1571 - 1610) who, seeking realism, used drinking companions, vagrants, and prostitutes as his models for his religious paintings, Ricky works from models that have character, and strength of presence, people who he encounters within family, from the streets of Chapala, and the internet.

“Like Rembrandt, I try to capture the souls of the people I draw.”

Ricky’s use of dark and light, and contrasting strong and muted colors to create depth, is evocative of Rembrandt, Leonardo da Vinci (1452 -  1519), Antonello da Messina (1430 - 1479), Caravaggio, and other Renaissance artists. But his sensitive nature is distinct from the violence present in Renaissance culture. Caravaggio, for example, after a tennis match that he won, killed his opponent in a fight over a prostitute. A mesmerizing novel, Sudden Death, by Alvaro Enrigue, captures the rich story of Caravaggio, the Renaissance, and tennis as a form of duel.

“Since I was a boy I liked to invent things, as did Leonardo da Vinci. I used to scare my mother with my inventions.”

Granna’s provocative painting Bruma evokes hidden events about which the woman cannot speak. Her white collar with tatting worn over a black dress indicates she is part of a religious community. The symbolically- exaggerated Napoleonic hat reflects dress in the (1640s), as well as symbolic meaning embedded within the fabric of the painting.

Perhaps the woman is Hester, who had a child out of wedlock, the subject of The Scarlet Letter by Nathaniel Hawthorne, her neck scarf a symbol of the letter she was forced to wear. Bruma forces viewers’ reflection and wonder. Within the painting, Ricky’s use of a blue grey background, which reappears in the tones of the woman’s face, visually unifies this world full of unanswered questions and symbolic meanings. Viewers must unlock the keyhole in the clasp between her breasts and discover what in hidden within.     (Photo 2) 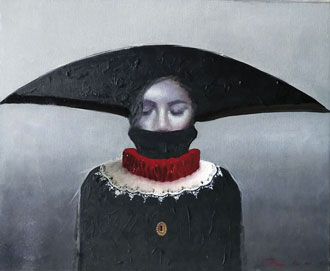 Ricky’s exhibitions in Paris, New York, and South Korea were sold out. In 2016 he was in the final group of six in the Kitsch worldwide contest in England. He has exhibited in group shows, and individually, throughout Mexico. Ricky’s art will be exhibited in both Guanajuato and Guadalajara in March, 2018, and during October, 2018, in Chapala.

*The link below will take you to several of Ricky’s stunning works.