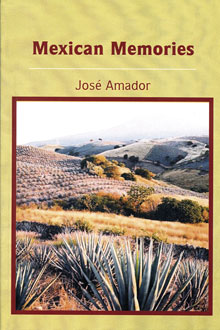 (Ed. Note: Over the next few months, we shall be running excerpts from Jose Amador’s excellent collection of short stories entitled Mexican Memories. The book sells for 90 pesos and can be found at most book stores at Lakeside.)

I remember Tarcisio perfectly. We were companions and friends at school, and he excelled at everything. In school he always received the highest grades. He rode horses well, he participated in the rodeos, and he even liked to sing. Besides, because of his good looks and happy disposition, women liked him. One of the clearest memories I have of Tarcisio is playing hide and seek, because he was difficult to find.

However, he wasn’t good at working. He didn’t enjoy work, so he dreamed of marrying a woman with money and helping her to manage it. Then Cupid, trying to help him, thought that Gertrudis, daughter of the deceased Serapio and Mercedes, would be the perfect candidate. She was single and had inherited, among other properties, the Los Guayabos ranch. To provoke a meeting, Cupid led Tarcisio to a cattle branding at that ranch.

I went as his companion. As he entered the cattle pens, while Gertrudis centered her attention on him, he treated her with indifference. For good reason: she was homely, explaining why she hadn’t married.

But this time the “little procurer angel” had decided to remove Tarcisio’s resistance toward her. So Cupid hurled toward my friend arrows carrying information: about the cattle, the land, and Gertrudis’s other possessions. They all hit the target of his ambition.

That was one of the last times I saw him, for I had already gone to live in Mexico City, where I remained trapped for life.

In spite of time and distance, I continued to get news of the town and the people. One piece of gossip told me of the simple wedding of Tarcisio and Gertrudis.

That wedding was an unattractive picture! I forgot to tell you that besides being ugly, Gertrudis always wore pants and boots and looked mannish. To finish criticizing her, she was bossy.

On one of my journeys to the town, Tarcisio and I met, and we immediately embraced our old affection. In that moment I realized his conversation and facial expressions were guarded. The plans he had imagined, to help his wife with her business, had failed, as she had not allowed his participation. To hinder their relationship even more, I think that Gertrudis was barren, and a marriage without children rarely can solidify.

To finish wearing away his dreams, my friend had to work fattening pigs in the pens of the old ranch house. While doing this job, a few months after our meeting, something happened to him that would change his life.

One afternoon while he fed the animals, one of the pigs, as it leaned against a pilaster to scratch itself, knocked down part of the column. A pitcher lay uncovered and Tarcisio broke it, finding it full of gold coins. He took the coins, leaving only broken shards, with one coin lying among them.

That night, without telling anyone, Tarcisio disappeared into thin air. Today, ten years later, neither his family nor his friends have seen his face.

Some people say he was kidnapped and killed. Others believe the river dragged him under, together with his horse and his treasure. It’s also said that he went crazy and ended up in an insane asylum.

The people of the town keep making these foolish remarks. They are all lies, because I know he left to follow his dream.

I was right. Yesterday, while I watched on television a bullfight in Seville, the camera panned the barrier surrounding the bullring for a few seconds, and then for three seconds it focused on Tarcisio. He was smoking a cigar, accompanied by a pretty young woman, and between the two was a little boy. Those five seconds were sufficient time to realize he was savoring happiness.