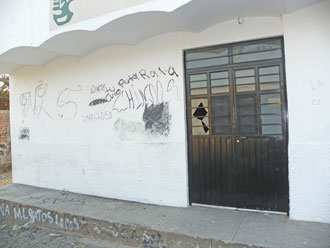 Although the old front door took quite a beating it remained firm, like an old friend.  They broke windows and left graffiti on the wall, which was quickly removed by the recovery team.  Failing to open the doors, they climbed over the roof.  The only place they could penetrate was the kitchen where they stole all the food for the children’s Friday comida and a blender.  Everybody knows who they are but nobody is talking. I have a feeling the people will take their own revenge.

These are the very boys we hope our gymnasium of 2018 can turn around.

We were lucky that no one was in the center.  We lost very little, everything is repairable. We are now repairing most of the windows, replacing them with plexiglass, putting screens and bars up, sealing doors not needed that lead to the street...but it is all doable.  If you look for it, there is a bright side to anything life throws at you, just look harder for it.

It adds to the urgency of getting young boys off the street. Boys in the recovery program that actually make it have told their stories. One such kid was Ed Latimore, from Pennsylvania, who reached a level of fame with his book “Not Caring About What Anyone Thinks”. Ed spent his childhood in housing projects and ghettos, areas which promote many things that imprison you in that environment forever, such as teen pregnancy, a rap sheet, violence and drugs. He learned things too, that only experiencing it can teach you, that can also give you an advantage in life if you survive it.

Some of Ed’s advice:

Always have good manners in the hood, it defuses violence.

Expect to be robbed, neglected and betrayed.

Money is NOT the root of all evil; NOT having money is.

Crime does pay - that is why the threat of prison rape means nothing.

When you live in poverty and crime, you can always find something to be grateful for.

Life is like poker, it is how you play the hand you are dealt.

It is not easy, but anyone can change their life.

Thank you Ed Latimore.  I wish you were here in Mexico to talk to the boys of the Barrio in Tepehua.  They need the wisdom of only those who have been there and done that. On the flip side, the prison of poverty and crime also has an appeal that smacks of freedom for those raised in secure homes...the appeal of the hood and the streets traps many a kid from a good home.

We have our own Ed Latimores who are willing to give the gymnasium therapy their best shot, they are grateful to have beaten the odds themselves, and want to share knowledge with the boys.