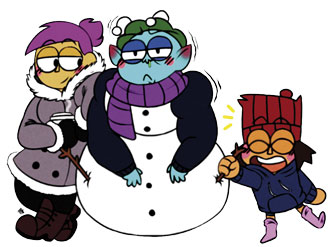 After 17 glorious winters at Lakeside in Ajijic we spent the last winter in the snow infested lake-effect region of upstate New York. Why? It’s complicated, the reasons not for this writing.

The lake we enjoy during the summer closes down in the winter, although some folks do live here all year round. This year we decided to join them and had a fabulous winter. The temperatures were relatively warm and the snow did not fly as far south from the lake-effect zones of the Great Lakes.

Usually the snow plow doesn’t go down our street because it is a dead-end and no one lives on this street in the winter. This last winter we lucked out. A neighbor four houses down from us let his niece and her boyfriend live there during the winter to wait out her pregnancy. A special county task force was convened and it was decided that the street would be snow plowed just in case she needed emergency assistance.

Our mail box is on the corner of the main road as the mail truck services that part of the street. One day I came out for the mail and the post box was gone. It was laying 20 feet from its original birth place. The once-friendly snow plow had whacked it. I now understand the meaning of air mail. I called the county highway department to bark at them for the new twist in their snow service. The county superintendent would not pay for the new mailbox.

He explained: “We just don’t do that.” “Why again?” I inquired. “Because we just don’t do that.” He claimed he had his mail box whacked four times in two years in an attempt to appease me. He failed to see the irony that his employees were trying to send him a message. And may I add, via air mail.

The next day I decided to ﬁx the mail box myself. When I approached the mail box it had miraculously self-healed itself as it was standing where it once was lodged. Hold on, there was something wrong though. The mail box was about a foot lower than before. I stared at the mail box only to discover it had been jammed into the snow bank and was tittering on its last legs with each breath from the gusting winds. I can’t prove it, but someone in the county highway department was laughing.

Well, I always like to have the last laugh. I drew up plans and a list of materials to construct a four foot deep hole and place an eight inch steel casing into the hole and ﬁll the casing up with concrete. I was going to lace the snow plow eating structure with reﬂective lights with a warning that would read: “I know where you live.”

My wife thought I had ﬂipped, but my buddies and our beers thought otherwise. The hole-digging went slow because the ground was half frozen and the beers interfered with a task that was supposed to be straightforward. At about inches into the hole, several blisters later and two buddies gone home, a county official stopped by and informed us such a structure so close to the road needed a special permit. We didn’t like the amount of time the permit would take so we offered him a beer if he would look the other way.

We realized at our last offer of three beers that he would not relent. When I looked down at our blistered hands, the empty beer cans on the ground and each other’s half-frozen red faces I realized I should hire a hole drilling outﬁt. Fortunately the mail box wasn’t down long enough to miss the weekly delivery of the Penny Saver and Costco coupon mail outs. Home Depot was gracious enough to accept the material returns without a re-stocking charge.

This winter will be void of snow plows, mail delivery and feeding the wood ﬁre. We are returning to Lakeside.