The Mysterious Disappearance of Agatha Christie 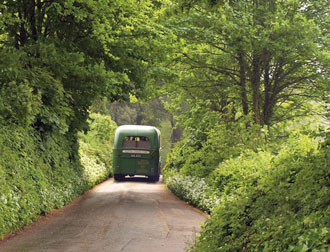 Among the greatest mystery novelists of all time, Agatha Christie, became the most published novelist in history, outsold only by The Bible and Shakespeare; she enjoyed the highest accolades and awards an author could ever possibly achieve.

One of her greatest mysteries however was carried out in real life- on Friday Dec 3rd 1926, Agatha Christie, at 9.30pm, kissed her daughter Rosalind goodnight, left a hand written note for her secretary, then climbed into her Morris Cowley and drove off into the night. The following morning her car was found by a small lake called Silent Pool near Guildford, Surrey, with the lights still on, her fur coat and suitcase on the seat, but no sign of the famous author- she had vanished.

In the weeks leading up to this day the Christie household was not a happy place; her mother had passed away earlier that year and now her husband, of twelve years, was openly having an affair with a younger woman, named Nancy Neele. It had led Agatha into a state of confusion and insecurity: she was psychologically fragile, confused, lonely and desperately unhappy.

Her husband, former World War fighter pilot, Colonel Archie Christie, now perceived as a provincial bore, spent most of his time away from his family and, after a trial reconciliation that failed, he requested a divorce from Agatha.

Days after her flight from the house the newspapers ran front page news of this famous author’s strange disappearance and a massive manhunt ensued with over 1000 police, tracker dogs, volunteers being employed- even the Silent Pool was dredged on the assumption that she may have committed suicide. Speculation was rampant: had she taken her life, or was this just a publicity stunt to promote her recently published best seller The Murder of Roger Ackroyd. Suspicion fell on her husband, whose affair with his mistress was now public knowledge.

Eleven days later, in the Swan Hotel, Harrogate, some 200 miles north of London, Agatha was recognised by a member of the band playing for the guests. She had checked in the hotel the day after she had abandoned her car in Guildford, and strangely, she registered her name as Mrs. Neele, her husband’s mistress’ name. Within hours her husband, accompanied by police, identified his wife at the hotel, and after a brief interrogation, the husband declared to the press that his wife was suffering from amnesia. Evidently, she mixed with other guests over those 10 days, playing bridge, dancing, having conversations, and yet no one had a clue that she was indeed the missing famous mystery writer.

Despite these claims of memory loss, many people were suspicious: some thought that this was an elaborate shot at revenge against her wandering husband, and that amnesia was just a ruse. Several doctors seemed to support the fact that the troubled author was in a ‘fugue’ state thus supporting her memory loss. But then the question begs how would she recall the name of her husband’s lover, that she used when she checked in at the hotel. Opinions were greatly divided; Edgar Wallace, the mystery writer said of the affair, “A typical case of mental reprisal on somebody who has hurt her.” That would seem so very probable, coupled with the likelihood of a nervous breakdown.

She divorced her husband soon after these events and she later went on to marry the famous archaeologist, Sir Max Mallowan, with whom she was happily married until she died in 1976.  There is a final chapter to this story that ponders credence. Agatha Christie was reticent about those 12 days of her life from thereon after. However, she wrote several novels later under the non de plume  “Mary Westmacott,” one of which was titled Unfinished Portrait, a story of a woman, named Celia, who after a failed marriage, had thoughts of suicide. Later, her husband said of this novel, “In Celia, we have more nearly than anywhere else a portrait of Agatha.”