The Mexican-American Soldier in WWII 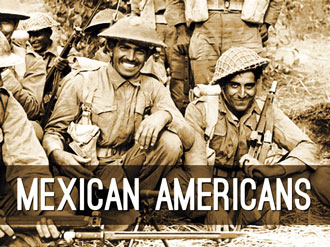 When the United States first entered WWII in December of 1941, there were more than two and a half million people of Mexican descent living in the US, eighty-five percent of whom resided in five states: New Mexico, Arizona, Colorado, California and Texas.

But in early 1941, an order had already been issued by the commander of the 36th Infantry Division that a new unit be formed, comprised only of Mexican-Americans. The mandate included both officers and enlisted men.

Whether the order was discriminatory cannot be easily judged. What is indisputable is that it gave rise to what later became one of the most highly-decorated fighting units in American history.

The new unit, called “E Company,” became part of the 141st Regiment of the 36th Division, later known as the Texas Volunteers. The all-Hispanic rifle company quickly drew many recruits from every part of the Southwest, including many men who had long been members of the National Guard in their home-states.

The rifle company soon became noted for its excellence. The remaining question was how well it would do in actual combat, a doubt resoundingly settled when the Texas Volunteers stormed the Italian beach at Salerno and began blasting their way up toward   the Eternal City of Rome.

But then came several elements which in combination dealt the American forces a stunning counter-punch. The Germans held the high-ground at Monte Cassino, from where they could shell the US troops below with shattering accuracy. The terrain had also grown steep and rocky, and with the driving sheets of rain, the entire area became a swamp. Hundreds of Sherman tanks sat stalled alongside washed-out roads.

The Italian campaign had boiled down to that most basic element in any army: the foot soldier. It was now his war to either win or lose. The first major objective was to successfully cross the raging Rapido River. To accomplish this, 156 men of E Company were ordered to make the crossing first, though it was known they would be facing more than 3000 Germans on the other side, armed with heavy machine guns, mortars and even light cannons.

Why such a pitifully small group of men, all of whom had been in combat for three straight weeks and some of which could barely walk, was sent out on such an impossible mission is something that even now, some 75 years later, is still hotly debated. Of the original striking force, only 23 men made it back to their own side of the river and of those, a dozen later died.

Even so, by the end of the war, E Company had won more medals for bravery than some entire regiments, while overall, Hispanic soldiers had been awarded more Congressional Medals of Honor (in ratio to their numbers) than almost any other ethnic group.

Yet despite their outstanding combat record, these same heroes were initially denied membership in both the Veterans of Foreign Wars and the American Legion. But that history of outstanding achievement has had its way over the past several decades and today every branch of the US military is packed with high-ranking Mexican-American officers. Moreover, the top leadership of both the VFW and the American Legion has often been held by Mexican-Americans.

The philosopher who once said that “the wheels of fate grind slowly but they grind exceedingly fine” was not wrong.

Editor’s Page
Editor’s Page By Victoria A. Schmidt July 2020 A Perfect Storm June 2020 Thanks For The Memories May 2020 Only Nine Little