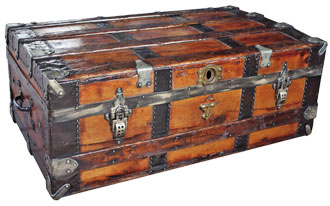 A porter was about to finish his shift, after loading the luggage bound for the evening train to Chicago when he became aware of a putrid stench that seemed to emanate from a heavy trunk that had been delivered to the Depot that morning. The station master was summoned who had the trunk moved to a nearby empty office; when the trunk was opened the sight was sickening: underneath a quilt and bloodied sheets was the body of a young woman in the fetal position.

She had long golden curls that draped over her white porcelain skin. This grim discovery would set in motion a series of events that would have widespread ramifications across the nation. Within minutes the police from the 18th Precinct arrived at the scene. Upon questioning the porter it was ascertained that a woman earlier that day, prior to buying a ticket to Chicago, had used a local truckman to collect the trunk from an address on Second Avenue- the truckman was a local man, named William Pickett.

All local Precincts were immediately ordered to locate him. The body of the young woman was sent to Belleville Hospital, where Dr. Cushman, the coroner, performed the autopsy; he confirmed the victim died as the result of a botched abortion.

Paterson, New Jersey.  Walter Conklin was the son of a wealthy industrialist and Alderman to Newark, and was regarded locally as a ladies man, with his good looks and immaculate attire; often seen at parties with a young lady on his arm. His family lived in the upper class neighbourhood of Paterson.  A few blocks away, across the river, amongst the working class, lived Caroline Bowlsby, who rented a house after her drunken husband left her; here she had taught her three daughters the skills of dressmaking.

Alice was the eldest daughter, endowed with exceptional beauty, a sweet innocent women, aged 25, who taught at the local Sunday school. It was at this dressmaker’s shop that Walter Conklin met Alice Bowlsby- a romantic attachment ensued.  Alice’s mother, eager to see her daughter married, was pleased, yet, after six months, it was doubtful the Conklin family were aware of the affair.  During August 1871, Alice became pregnant with Walter’s child, such a predicament he was desperate to remedy:  within days he had responded to an ad in the New York Herald’s medical columns that  read “Ladies in trouble guaranteed immediate relief, sure and safe, no fees required unless perfectly satisfied”.

Wednesday, August 23 rd 1871 Alice  left Paterson that morning, having told her mother she was going to a matinee with a friend. She wore a white lawn dress with a blue sash and ribbons, and in her purse was an envelope with cash, a train ticket, and the address of a Dr. Ascher, 687, Second Ave, New York. That evening she did not return home. Wm. Pickett, the truckman at the railroad terminal came forward and confirmed to the NY police that he had in fact picked up the trunk in question- the address was 687 Second Ave. The police sergeant recognised it immediately; it was the home of a Dr. Jacob Rosenzweig, a known abortionist whose credentials were fake.

Only a week before the NY Times had featured an article named “The Evil of the Age,” condemning the prolific practice of abortionists in New York: Rosenzweig was exposed as one of the leading perpetrators. He advertised his services in the medical columns under the alias Dr Ascher. The police raided his house, arrested Rosenzweig on suspicion and in their search they found a handkerchief with the name ‘A.A. Bowlsby’ embroided together with some blue ribbons.

The newspapers were quick to publish the news of the gruesome trunk discovery and Caroline Bowlsby, now distraught with anxiety, sought advice from her family doctor and dentist in Paterson, who decided to visit Dr. Cushman at Belleville hospital in order to dispel the dreadful possibility. Vaccination marks and dental work revealed the truth: the body was that of Alice Bowlsby. The revelation devastated the family, but even more so Walter Conklin, who knew the truth would ruin his reputation, and shame his family: the next day he went to his office where he took out a pistol and shot himself in the left temple. They found a note addressed to his parents that expressed deep remorse, and another note, on which there were instructions from a Dr. Ascher, 687, Second Ave, New York.

Now there were two deaths; the press did not miss the irony: two lovers who sought to abort their child, ended up dead themselves.  Rosenzweig now named “The Fiend of Second Ave,” was vilified in the press. At his trial he was found guilty of manslaughter and sentenced to seven years, yet, through a legal technicality he served only a year in captivity. Alice Bowlsby’s death triggered widespread anger and condemnation in New York State, which eventually led to  rallies against the rampant growth of such malpractice. Medical institutions across the USA galvanized their support which resulted in new medical licensing legislation outlawing the illegal practice. The New York Times had lead the crusade for months against the ‘butchery’ and wrote of Alice Bowlsby- “She was the victim of her circumstance, born in poverty, yet with inherent beauty which can be more ruinous than any other gift bestowed on her—such women fall prey to the scoundrels that surround them.”