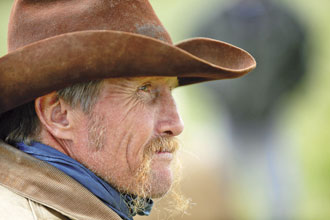 On the day it began, four of us were gathering one of our pastures in the late spring. The pasture was not as large as most of our ranch pastures.  Being less than three miles across, it was fairly easy for four mounted men to sweep from one end of it to the other in a relatively short time.  We called it the Corral Pasture.  In it was one of four large sets of shipping pens.  Because of its size and the long draws that ran from one end to the other we always considered it an easy ride.

But this day would not be easy for any of us cowboys.  It was windy and a little chilly.  And rain seemed certain before we finished our work.  Spread out now by such distance that we were all out of eyesight from each other in the rolling hills of sagebrush and sand, each one of us turned his horse away from the wind and the beginning rain.  Some of us even dismounted to walk along behind our gathered stock in an effort to warm ourselves as we moved along.

In this country, there was no place to go to get in out of the rainstorm, or the lightning that accompanied it.  The country was rich in iron ore, and so it drew frequent strikes whenever it rained.  Dead cattle, fresh killed by a strike, reminded us of what would be our terrible fate if we were as unfortunate as the healthy, fat cows we would find lying flat on their backs, with little sign of injury or illness about them.

Now came the lightning with the wind and rain in the Corral Pasture, so close that there was almost no time between the bright flashes and the loud bang of the lightning strikes that lit the sky with a bright explosion of white light.  Horses grew restless and fire danced across their ears with a loud snap, which caused them to drop their heads and shake their ears as if stung by a swarm of yellow jackets.

Most of us dismounted and silently prayed that we would make it home for supper and a dry bed.  And not one of us would know the fate of the other three until the storm passed and each man rode up on a hill to show to his saddle mates, “Hey, I survived that one.  How about you?”  But not this time; not everyone survived this time.

He was a cowboy from Montana, as I recall, who came south to Wyoming just to see a little country.  He hadn’t signed on with the ranch for more than a couple weeks.  I can’t remember his name.  And I never knew exactly where he called home.

We first saw his black horse, named Sniffles, running wildly across those hills of sage and sand, frightened terribly by a lightning strike that killed the man from Montana as he walked at the end of his bridle reins.

We found him lying there, flat on his back in the fresh, wet sage with barely a sign of injury.  Someone was sent to the home ranch for a truck that took this unlucky cowboy for his last ride to town.

He carried so little identification upon him that his body would lay in the city morgue for a month before it could be determined where he would be grieved and laid to rest.  And so, it seemed, the story ended.  Except that it did not!

Three summers later, in mid-August as I recall, myself and two other cowboys were helping put up hay at the home ranch when it began to rain in the early afternoon.  And with the rain came the lightning.

We were very close to the house, and the rainstorm looked as though it would last a while.  We moved quickly into the barn, next to a corral full of saddle horses that we had kept up that day for reasons I can’t remember now.

“Looks like a good afternoon to shoe horses for the fall works,” said one cowboy to the other two of us.  We each collected two horses from the bunch, haltered them, and tied them in the barn.  Then we turned out the remaining 15 or 20 head, and they immediately disappeared into a pasture north of the house.

I led my first horse to the center pole in the barn, and tied his halter close to keep him from moving around too much as I worked on his feet.  During this shoeing, I glanced out the barn door and gazed north, to see our entire horse herd gathered closely together on a small hill overlooking the ranch.  The wind and rain had caused all of them to drop their heads low to the ground and turn their rumps to the driving rain.

As I watched them, the lightning struck, and the bang and flash of it caused me to wince and duck my head toward my horse’s side.  That bunch of horses scattered in every direction, like a covey of quail rousted from a roost.  From a distance of no more than a quarter of a mile, I could see one horse’s body lying on the hill.

I turned to the other men and raised my chin toward the hill.  “Wonder which one that was?” I asked of no one in particular.  “I reckon I’ll go take a look when the rain slows down a little.”

I was three shoes into a fully-shod horse when the rain stopped, and I jumped into a pickup and drove up the hill to the carcass.  I gazed sadly at the beautiful black horse lying there dead.  It was Sniffles.

I returned to the barn and one of the others asked me, “Who did we lose?”

“Well,” I said, “It looks like that Montana cowboy finally came back to get his horse.”