Potsherds of the Future 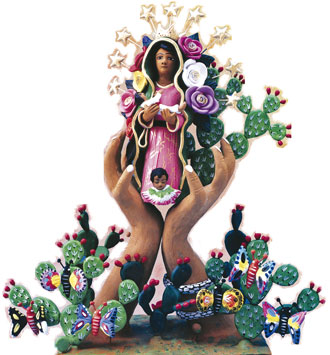 An archaeologist’s heart may leap up when he beholds a rainbow in the sky, but an ancient garbage dump, the older the better, produces true ecstasy. He joyfully delves into the detritus of long-vanished cultures, not for treasure (although that is occasionally found), but for old bones, discarded tools and, especially, broken pots. To the expert, the smallest fragment of pottery can speak volumes about the people who made and used it and the ancients were generous in their contributions to the science.

The tradition of creating useful and ornamental objects from common clay is as old as civilization. Some of the finest pre-Columbian examples come from Tlatilco and date from 1200 BC, but the ceramic arts still flourish, virtually unchanged.

Tools are often primitive in the extreme. A rough plank or a wide, shallow dish rotating atop a rock or an inverted bowl serve as wheels. Scraps of wet leather, felt or smooth stones help form contours and burnish surfaces. Broken pieces of pottery, gourd segments, old nails or sharp thorns, even fingernails, can be used for impressing designs or piercing patterns in the wet clay while feathers, twigs or fingers serve to apply home-made paints and glazes. Firing is achieved by stacking dried pots above ground or in shallow pits and covering them with mounds of burning wood, dung and maize husks.

With such simple equipment, modern potters produce an astonishing array of works, some supremely beautiful, others whimsically amusing, a few garishly ugly, to gladden the hearts of future archaeologists. It would be interesting to know what those learned gentlemen will make of them. 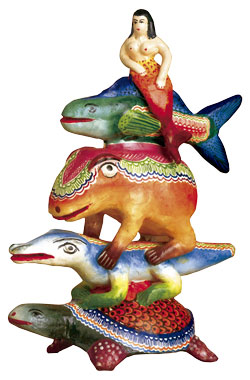 This buxom mermaid from Puebla is perched somewhat precariously at the summit of a column of water creatures. She sits on a smugly smiling fish atop a sly frog, a wary alligator and a turtle who seems pretty disgruntled at being low reptile on the totem pole. Though the whole is only slightly over eight inches tall, crudely modelled and painted with commercial paints in improbable designs and colors that would give a marine biologist a bad case of the willies, it has a whimsical charm that is irresistible.

Given the current rate of wildlife extinction, our hypothetical archaeologists will probably conclude that all these marine animals are as mythological as the mermaid. 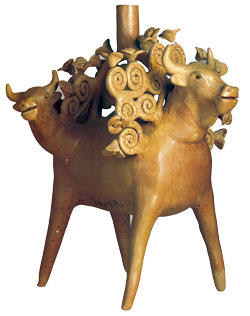 Animals have been a recurring theme with Mexican potters since the days when the ancient gods were noted for assuming zoomorphic aspects. Like his early ancestors, the creator of this highly bedizened cow was not about to allow mere realism to interfere with his art. The profusion of flowering vines sprouting from neck and withers may be all right but the two calves emerging from the flanks are bit startling. The figure, which stands nearly 18 inches high and is finished with a burnished orange slip, is designed for use as a candle holder.

Perhaps the archaeological conclusion here will be the worship, not of the golden calf, but the three-headed cow. 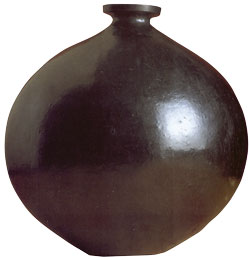 Black glazes are common in Mexico, but only the potters of this area produce black wares with a lovely metallic sheen. Though they start with a local dark clay, the lustrous black finish is not an applied glaze but the result of firing the dried pieces for 24 hours in a reducing atmosphere where the lack of oxygen turns red oxide to black. Burnishing produces a glossy black while unburnished ware is an equally attractive gun metal grey.

Unless someone decides that the color black had some esoteric cultural or religious significance, the only response here would have to be simple admiration for the beauty of the work. 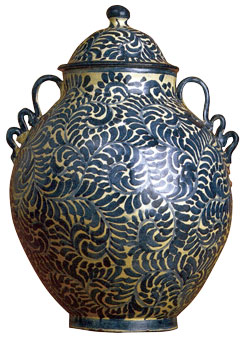 Post-conquest artisans were quick to adopt foreign designs and techniques. The majolica ware for which this city has become famous is a serendipitous mating of white glazed, blue decorated pottery from Majolica, Spain and the graceful shapes inspired by Chinese porcelain that was transshipped from Acapulco to Vera Cruz in great quantity during the heyday of the Manilla galleons. This handsome, 15 inch tall, lidded jar is a perfect example of that East-West meeting but the swirling foliage gives it a definite Mexican accent.

The cross-cultural confusion here will undoubtedly furnish our future scholars with fuel for endless debates. 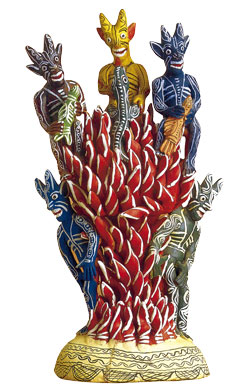 These gleefully grinning devils cavorting in the flames of hell with their pet serpents, birds and fish are from a Purepecha village which specializes in such delightfully whimsical figurines. There one may encounter these fiends of the underworld, not only busy at their appointed task of torturing the damned, but also doing all sorts of outrageously improbable things. They ride motorcycles, drive cars, travel in buses, go fishing or dancing, partake of demonic “Last Suppers” and generally seem to be having a devilish good time whatever they do.

One can imagine two schools of thought springing up over these figures. Some will assume that the people who made them were devil worshippers, pure and simple. Others will maintain that these are actually self portraits of an extinct human/animal hybrid with horns, hooves, forked tails and a weird sense of humor. 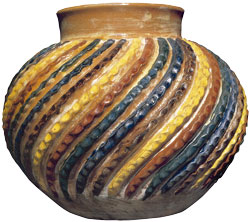 The gracefully undulating swirls of alternating colors in muted yellow, burnt orange, green, blue and brown raise this mundane 0lla to the realm of true art. The sensuous curves are created by deeply scoring the wet clay with a piece of broken pottery and the resulting ridges are then indented, with a length of old rope or, as in this example, with deft touches of the finger tip, to produce the scalloped effect which gives this ceramic style its name of “roped” pot.

Unless someone attributes some deep significance to the line and color of these pieces, here again the response can only be wonder at the skill and artistry involved in producing them. 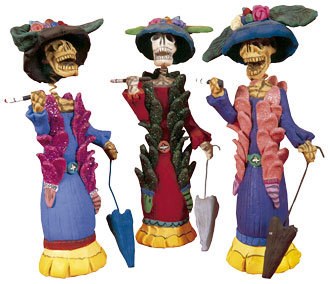 These three skeletal ladies are dressed to the nines in flouncy low-cut gowns, lavish hats, and feathered-serpent boas. They carry fashionable parasols and, somewhat incongruously, sport big black cigars while appearing to find the whole thing uproariously funny. These are typical examples of a facet of Mexican folk art that is unique, the celebration of El Dia de Ios Muertos (Day of the Dead). Unlike the scary Halloween symbols found elsewhere, Mexican skeletons are always seen enjoying death to the hilt.

Future generations will be at least partially correct in assuming the existence of a death cult, but they will undoubtedly be hard put to explain the hilarious ways in which these skeletons seem to disport themselves.