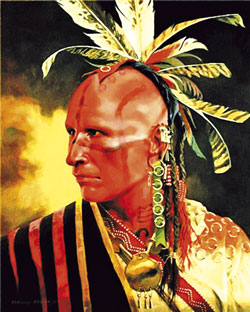 There is a tendency to elevate unsavory persons to the status of idols, as in the case of Andrew Jackson, and to marginalize, overlook or unjustly damn more than a few genuine heroes. Similarly, in time of war there is frequently a presumption that the Deity smiles upon one’s cause, and that one’s adversary is in league with the devil.  Simon Girty, a loyal subject of the Crown and a friend of Native Americans, has been a victim of both human errors.

Acts of barbarity along the American frontier were by no means unique, to which the stories of Wounded Knee, the Great Swamp Massacre and Sand Creek well attest. However, one of the most horrific incidents took place on March 8, 1782, when a force of 160 Pennsylvania militiamen, commanded by Colonel David Williamson, captured the Native American town of Gnaddenhutten, Ohio. The militia locked the town’s 96 Lenape/Delaware Indians, Christianized members of the pacifist Moravian church, in two buildings overnight.

The Lenape had only returned to the area to harvest their corn crop, but were suspected of having committed acts of violence along the frontier. Overnight, the captives prayed and sang hymns, while their captors debated their fate, finally deciding to execute them. In the morning, the captives, mostly women and children, were led one at a time into an outbuilding where they were executed with a heavy wooden mallet.

Colonel Williamson and his band were not a professional military force, but an undisciplined rabble, and while most Americans condemned their action, many on the frontier celebrated it and hailed the perpetrators as heroes.

While atrocities against Native Americans were frequent on the Ohio frontier, this act, committed so cold-bloodedly against members of an unarmed, peaceful people, aroused the ire of their fellow Lenapes. Someone had to pay, and someone did. Ironically, the wrong man did.

In 1782, Colonel William Crawford was ordered to lead a 400-man incursion into the Ohio country to combat Indian attacks that were supposedly instigated by the British from their stronghold at Fort Detroit.  Crawford’s mission was to destroy Lenape and Wyandot villages along the Sandusky River.

His expedition was ambushed deep in the wilderness, costing the lives of 70 of his men and causing many others to flee in panic. The Lenape, thirsting for revenge over the  Gnaddenhutten Massacre, captured Crawford, whom they mistakenly blamed for the outrage, and several of his men.  Crawford, of course, had been nowhere near Gnaddenhutten at the time of the incident.

Most of the captives were scalped and tomahawked, and Crawford was tortured for two hours before the grisly method of his execution was decided upon; he was to be burned at the stake. Over a hundred rounds of gunpowder were fired into his naked body, his ears were cut off, and flaming embers poked into his flesh. Concremation generally took from 45 minutes to two hours. During his ordeal, one of Crawford’s persecutors scalped him, and a Lenape woman heaped hot coals onto the wound.

The role of the so-called renegade Simon Girty in the ordeal of Colonel Crawford inspires debate to this day. A Dr. Knight, a fellow captive, reported that Girty laughed when Crawford begged him to shoot him through the heart in order to end his torment. Cornelius Quick, another eyewitness, in an affidavit, swore under oath that Girty attempted to buy Crawford’s life by offering his captors liquor, money, his rifle and even his own favorite horse.

This latter view of Girty is consistent with his other attempts to spare the lives of captives, particularly in the case of frontiersman Simon Kenton. According to Quick, Girty was so insistent that the Lenape leader Chief Pipe threatened to burn him at the stake alongside the unfortunate Crawford. While Girty had influence among the Shawnee and the Seneca, he had none among the Lenape.

Who was this man, whose name has been associated with perfidy ever since, so much so that Stephen Vincent Benet includes him as a member of Satan’s jury in his story “The Devil and Daniel Webster”?  Girty, born in rural Pennsylvania in 1741 the son of Irish immigrants, considered himself a loyal American up until the early years of the Revolution. However, his friendship with Native Americans had deep roots. His entire family had been captured and treated kindly by Indians in 1750.

One of his brothers was adopted into the Shawnee nation, another into the Lenape, and Girty himself into the Seneca. During the years when he lived among the Seneca and other tribes, he grew to prefer their way of life to that of white Europeans. At one point, he even served as bodyguard to the Seneca leader Guyasuta.

During the Revolution, Girty was denied a promotion in the Continental Army and apparently was the victim of undeserved disgrace at the hands of a Colonel John Gibson over some minor infraction. At about that time, while serving at Fort Pitt, modern day Pittsburgh, he learned of the white man’s scheme to conquer all of the Ohio country and annihilate the Indians who dwelled there. Because of his friendly relations with the Seneca and others, he was continually harassed, bullied and belittled by his comrads.

Because he had never officially renounced his allegiance to the Crown and still regarded himself as a British subject, he threw in his lot with his Indian friends. Gaining the confidence of several nations, he was accepted at their councils as a full member, and he led several raids against white settlements on the Pennsylvania frontier. Because of his loyalty to the Crown and to his Indian friends, Girty has been vilified ever since as a renegade and a traitor. The reality is that he was most likely a good man who happened to be on the other side.

While Girty remained steadfastly loyal to the Native American cause, he saved the lives of many Americans who became their captives, often at his own expense. At one point, he even stationed his brother along the Ohio River to warn white travelers not to fall for the lures of Native Americans and land there, only to become captives.

Following the defeat and removal of most Native Americans from the Ohio country, Girty moved to Canada and settled near Fort Malden, Ontario, not far from the Lenape of Moraviantown, where the Shawnee hero Tecumseh would fall in his final battle in 1813. During the War of 1812, an old man, crippled by arthritis and suffering from fading eyesight, Girty fled his farm until the fighting and subsequent US occupation of the region had passed. He passed away quietly in 1818.

Today, a monument on the plains of western Ohio, near the town of Bucyrus, memorializes Colonel Crawford. Gnaddenhutten is now the site of a museum and monument to the murdered Lenape and is visited by tourists and school children year around. In Canada the monument to Girty reads, “Faithful Servant of the British Indian Department for Twenty Years,” and goes on to affirm that he was made a scapegoat for atrocities committed by others because Americans were fearful of his influence on the frontier.

Girty had serve loyally as negotiator, scout and military leader, and was buried with military honors.