Off to the Mexican Jungle: Part 2
Arriving & settling in at Yaxoquintala. 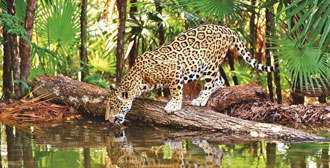 We were told we would leave the Mexico City hotel, Quetzalcoatl, affectionately called the ‘Kettle’, next morning, and travel south by bus to Tuxtla Gutierrez in Chiapas. On arriving at Tuxtla we all made a ‘bee—line’ to one of the best restaurant’s in town and ordered ice cold drinks in a futile attempt to cool our bodies down! This part of our journey ended in a brief ﬂight to Main Base, known in the Tzeltal idiom as Yaxoquintala but lovingly known to us students as simply “Yax.”

Getting there was made possible by another volunteer American missionary organization called the Missionary Aviation Fellowship. It ran a ﬂeet of two Cessna 170s and a Piper Cub way back in the 1960s.

This invaluable organization was responsible in transporting us students, other Indigenas workers, researchers and government officials in and out of this sea of rain forest which stretched way down south to the Mexican/Guatemalan frontier and beyond. I use the word sea purposely, for in those far off years that is exactly what the Chiapan rain forest was!

Once inside that sea of green with trees such as Mahogany reaching to a hundred feet or more, and the forest ground cover so thick with cane and underbrush that on one very scary occasion my husband Bert literally became lost and completely disorientated when only a couple of hundred yards from where we had built our survival champa!

The surrounding dense and almost impenetrable undergrowth absorbed any cry for help one may happen to make. We already knew of the true story of a ‘short-sighted’ researcher in Archeology from the University of Oklahoma in Norman who was lost for around a week after losing his glasses in the forest. Kindly local indigenas ﬁnally found him alive and after taking care of him until he was strong enough to travel, escorted him out of the rain forest back into civilization.

Preparing for these ﬂights was an education in precision weighing and patience! At the MAFs small hangar everything we had, had to be weighed. We were given a choice! Either you could be weighed alone, or you and your baggage together, so only the most slender of us wanted to be weighed alone.

It was critical that the pilot knew exactly the gross weight of the plane before take-off, because the runways were always limited in length and often ended with the intersection of a river or lake. The popular name we students gave these retired US. Navy pilots was The Tree-Top Fliers because they often literally ﬂew their planes just above the tree—tops on their dangerous jungle ﬂying missions. Each group of Jungle survival students had a special respect for these veteran pilots and it was not unusual on completing the survival course to be rewarded a ‘hair-raising’ acrobatic display with the student on board, before returning to their Tuxtla airﬁeld.

The journey from the MAF airﬁeld to our destination at Jungle Camp took only about 30 minutes, a short ﬂying time, but if we had attempted the journey over-land by riding a mule, or worse still, on foot through the rain forest with the help of baggage mules and an Indian guide it would have taken several days. No one ever wanted to try the jungle way, not even my husband who had no fear and excelled in survival techniques.

On arriving over the main Jungle Base (called Main Base) at axoquintala, a village like any other Indian/Mexican rural village, I noticed that the very small improvised air-strip had a few cows grazing on it. Our pilot knew that all he had to do was to circle and ‘buzz’ the air-strip until a young lad came out and herded the animals to a safer location and then, in his ﬁnal leg turn our pilot was able to safely land. One of these special jungle pilots was a woman, unique in that during her ﬂying career, she was considered to be among the world’s top ﬁve acrobatic pilots!

Yaxoquintala lies alongside the Rio Santa Cruz so the navigational and pilot skills had to be up to the challenge of landing and take-off from tiny air-strips. If one ever over-shot on landing it would land pilot, plane and occupant into a river.

I held my breath and said a quick prayer knowing that in this special category of ﬂying, there was never a second chance. Main Base (Yaxoquintala) was to be the ﬁrst Indian isolated village where I and my husband would be introduced to the ﬁrst phase of jungle survival.

Little did we know what was awaiting us.