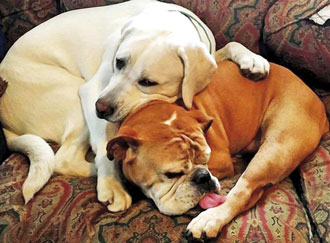 The earth is the Lord’s and all that is in it.

The world and all those who live in it.

The Christmas season is an appropriate time to reach out and care for the creatures who share our world, including those considered man’s best friend, without whom our lives would be sadly diminished.

My sister, the author Linda Steele was taking a break from her writing recently to ride her bike through the bucolic Texas hill country, when she observed a large brown dog lurking forlornly by the roadside, a stray more than likely dumped by his human family.

Linda attempted to befriend the sorrowful canine, but he was wary of the outreached hand of an unfamiliar human. A few days later, there he was again, standing alone along the same stretch of road, emaciated from lack of food.

Then, for several days, he did not appear. My sister and my niece Trudy petitioned St. Francis of Assisi, the patron of animals, for his intervention, and, sure enough, the next day, there was the dog again.

It took a major effort to coax him to them, but he finally agreed to accept human companionship. Back at the house, he gobbled down dog food, continually looking over his shoulder to assure himself that this group of humans would not abandon him like the last ones.

Taken to the vet for his shots and flea treatment, he was dubbed Frank, after St. Francis. Given that my sister’s family already has two dogs, every effort has been expended in an attempt to locate Frank’s original human family, in the off chance that he may have strayed off, that someone somewhere might be missing him.

The local veterinarian cautioned them not to advertise Frank over the internet because dog fighters find innocent prey in such a manner, non-aggressive dogs that are then turned loose for trained pit bulls to maul to death for practice.

Setting out to confront the dark side of the human story requires great emotional and spiritual grit, and yet, one dare not do otherwise. So it is with the evil practice of dog fighting.

Public awareness was brought to bear on the issue in 2007, when NFL quarterback Michael Vick, one of the world’s highest paid athletes, was arrested for his involvement with dog fighting, his subsequent conviction earning him a 21 month stay in prison. He and three others had been operating Bad Newz Kennels, where 50 pit bulls were being trained to fight, part of a high stakes gambling ring, where stakes of up to $26,000 were common and where atrocities were the order of the day.

Bad Newz Kennels was a chamber of horrors. Vick and his partners in crime routinely and without compassion executed those dogs found to be poor “performers”.  Some were hanged. Vick’s cohort Purnell Peace killed one losing dog by soaking it in water and electrocuting it. Others were drowned. One was slammed to the ground until it died of either a broken neck or a broken back. A pit bull named Georgia was found to have had all 42 teeth pried out, so that she could not bite a male dog during forced breeding. Non-combatant dogs, strays and other unwanted canines, dogs like Frank, were placed with trained pit bulls, to be maimed and killed.

When he was arrested and charged, several of Vick’s teammates responded cretin-like that they didn’t know what all the excitement was about, that the dogs were his private property and that he could do as he pleased with them. That many professional athletes, pampered by a corrupt system since childhood, are ethically challenged comes as no surprise. Not all are Shaquille O’Neal’s or Joe DiMaggio’s.

However, the Atlanta NAACP disgraced itself as badly by coming to Vick’s defense and urging “compassion for” him. Vick’s crimes were excusable on the basis of his ethnicity, it seems, much as Heinrich Himmler might have argued that his offenses were forgivable because he was German.

Perhaps even more damning was the standing ovation that greeted Vick when he returned to professional football as a member of the Philadelphia Eagles. One might argue that the crowd believed that he had paid for his offenses and should begin anew, but somehow one suspects that such benevolence had little or nothing to do with the fans’ response, but, rather that a frivolous and meaningless game took precedence in their consciousness over and above all considerations of justice or compassion.

Psychopathic serial killers often begin their careers by torturing and killing wildlife and pets, then moving on to their fellow humans. Perhaps it is the same with societies, leaving one to ponder over what other forms of “bread and circuses” the fans in Philadelphia might feel compelled to cheer for.

Even President Obama urged that Vick be given a second chance. It appears that in the minds of too many, the ability to toss a football excuses everything. And yet, Mr. Vick appears to have turned his life around, fostering numerous charitable causes in the years since and speaking out in opposition to dog fighting on behalf of the Humane Society.

Dog fighting did not end when Jack London penned his two classics White Fang and The Call of the Wild. Even though it is illegal in all 50 states in the US, it takes place regularly in all of them, a vicious blood sport fueled by human greed, cruelty and the insecurity of inadequate men who perceive dogs as extensions of themselves.

Spectators are eager accomplices, given that their admission fees and wagers create the market for such cruelties. Many become involved hoping to win big from betting. Most are simply sadists. Dog fighting is associated with other felonious activities; gang activities, money laundering, illegal firearms, drug trafficking. Matt Bershadker, president of the ASPCA, defines dog fighting as cruelty for profit.

On February 7, 2014, President Obama signed into law HR 2642, the Animal Fighting Spectator Prohibition Act, legislation that a repentant Michael Vick lobbied on behalf of, strengthening previous legislation, enabling law enforcement to arrest and charge not only those who stage dog fights but spectators as well. Recognizing that exposing children to dogfights desensitizes them to cruelty, the law sets severe penalties for those convicted of subjecting minors to such barbarities.

Still, the horror continues. The ASPCA estimates that there are tens of thousands of dog fighters in the US alone and hundreds of thousands of their canine victims. Filthy lucre feeds the offense, as always. In one raid, $550,000 was seized.  Between $20,000 and $30,000 may change hands in the course of a single fight.

Fighting dogs are treated cruelly from day one. Many are tethered with short, heavy chains, exposed to the elements, fed anabolic steroids in order to enhance muscle mass and foster aggressiveness, tails and ears often severed by means of cruel methods so that their rivals will have less to grasp onto. Fights may last for minutes or for hours. Many die of their injuries later.

Last December, in my own state of North Carolina, despite federal prohibitions making dog fighting punishable by years in prison, the ASPCA raided a fighting operation involving 156 dogs. The dogs were rescued, ten of the perpetrators were arrested and seven charged with conspiracy to violate the Animal Welfare Act.

As I pen these lines in the safety and comfort of my home, thousands of dogs are being neglected, abused and trained to fight for the entertainment of howling spectators. One wishes to banish such images from one’s awareness, but to pretend blindness and deafness in the face of human cruelty is to acquiesce in it, to become part of the problem, rather than part of the solution. It falls upon all of us to become the voice of those who have no voice.

As for Frank, he has developed into a happy, boisterous dog. He has befriended the local deer population and speeds along the fence line, playing his doggish game of tag with them. He loves to play “tug the rope” and has developed a fondness for cherry tomatoes from my niece’s garden. If only all dogs could find their way to such a blissful life.