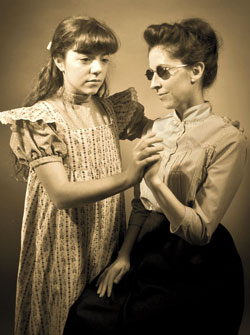 Annie Sullivan was born on April 14, 1866, in Feedings Hills, MA to Thomas and Alice Sullivan, impoverished immigrants from County Limerick, Ireland. At age five she contracted trachoma, an eye disease that impaired her vision. Her mother died when she was eight years old, and two years later, her father abandoned her and her younger brother. They were consequently sent to an almshouse in Tewksbury, an overcrowded home for the destitute; her young brother died several months later.

One day, a state official visited the school, and Annie, restrained by her elders so far, was strong minded enough (a trait she would own all her life) to approach him saying “Sir, I want to go to school.” Later she received permission to enrol in the Perkins School for the Blind in Boston: she was 14 years old when she commenced her studies. Annie was a bright pupil, progressed rapidly, and though her eyesight was poor, she later received treatments that improved her vision.

During her time at Perkins she befriended Laura Bridgman, the first deaf and blind person to graduate there; she taught Annie the manual alphabet, and the usage of fingers to ‘write’ letters on the palm of a hand. In June 1886, Annie Sullivan graduated at age 20 and was named the Valedictorian of her class.

Helen Keller, now aged six was one of five privileged children, whose parents came from distinguished backgrounds. When she was 18 months old Helen fell ill, (likely scarlet fever) which rendered her both blind and deaf.  She could have been institutionalized save that her mother sensed that her child showed intelligence underneath that overwhelming disability that was bestowed on her, and later, through family connections, she received advice from Alexander Graham Bell: she would contact the Perkins Institute for the Blind. A visit followed soon after, and the school’s Director, Michael Anagnos, suggested a qualified personal teacher for Helen’s development. That day Annie Sullivan met Helen Keller. It would become one of the greatest friendships in the annals of American history.  In March 1887, Annie arrived at the Keller’s house in Tuscumbia: the task ahead of her would be formidable.

Helen Keller, who, for over four years had lived in a world devoid of sound or light in dark isolation, had become an unruly and spoilt child who would tyrannize the household with her uncontrollable tantrums. Perhaps this was because an intelligent mind was being stifled by the loss of her two most important senses. Annie’s challenge was to gain the child’s confidence, and find the right balance between discipline and love, without crushing the child’s spirit: the discipline would come first. Secluded from the main house, Annie would work with her recalcitrant pupil attempting to find a way for Helen to communicate with the outside world.

The technique Annie used, which Laura Bridgeman had taught her, was to ‘spell’ words in the palm of Helen’s hand while touching the associated objects with the other hand. After many weeks of continued attempts to break the barrier- it happened. History has well documented through books and movies the famous scene whereby Helen feels the water flow over her hand from the water pump, while Annie spells the word W-A-T-E-R in her other hand. Helen stood transfixed, the day of enlightenment had come; the connection was finally made. ‘WATER” was the first word she learned.

That day Helen learnt 30 words—her appetite for learning words was insatiable: the words came quickly- ‘mama’ ‘papa’ and then came ‘teacher,’ the word Helen would call Annie from thereon after. That night Helen kissed her teacher: they were now inseparable. Helen said of that day “She opened the door to my soul.” Annie would be her teacher, interpreter and friend for the next 49 years.  Mark Twain, one of the many famous friends of Helen’s wrote to her calling Annie “Your other half, for it took the pair of you to make a complete and perfect whole.”

Helen Keller herself graduated at Radcliffe with a Bachelor of Arts degree; she learned to read Braille in five different languages, wrote her life story and became the champion of the deaf and blind throughout the world.

Annie Sullivan, now totally blind herself, died in October 1936, aged 70. At her funeral Bishop Freeman said the following: “The touch of her hand did more than illuminate the pathway of a clouded mind, it literally emancipated a soul.”

Helen Keller lectured all over the world and was eventually awarded the Presidential Medal of Freedom. She died in 1968, aged 88. Her body was cremated and her ashes were placed alongside those of her beloved Annie, (“teacher”) in the chapel at the Washington National Cathedral.