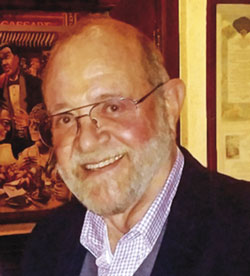 Let’s step back a moment and look at the long view. Our existence on planet earth is but a moment in geological time. Yet in that short period, we have accomplished many things in the three principal fields of human activity—physical, mental, social. In the process, we have lately realized that our fate may be determined by the unintended consequences of our accomplishments, so much so that we nearly all agree that the danger to mankind is man himself. He is his own worst enemy. As Pogo keeps reminding us, “We have met the enemy and he is us.”

You needn’t be a Nostradamus to see some of the problems ahead.  The tools, techniques and weapons we develop can be the instruments of our elimination, unless we justify the name “sapiens” as in Homo sapiens. Fortunately, we have a gentleman in our midst who has given these matters long and serious thought. It is this writer’s privilege to introduce Dr. Morris Schwarzblat to a wider audience. You may know him as the Director General of Science and Technology Development for the State of Jalisco. You may also know him as a resident of Lakeside where he and his photogenic wife, Ilsa Picazo, can relax. Both are published authors and public lecturers, both were born and raised in Mexico City but met and married in Cuernavaca.

A doctor of nuclear physics from the University of Arizona/Tucson, Dr.  Schwarzblat was invited to head up a new secretariat of science and technology nearly five years ago. Back then, the mission of the new office included travel to developed countries like Germany and Canada to glean new ideas that could then be implemented in Mexico. Nowadays, however, Mexican scientists are fully engaged in joint projects with European countries, India and China, projects that focus on medicine (vaccinations), agriculture and energy.

For those who missed his Open Circle presentation last June, here are a few salient points he made in praise of modern technology but in cautionary language.

The biggest cause of job loss in the U.S is technology. A 2013 Oxford University study estimates that 47 percent of U.S. jobs could be replaced by robots and automated technology within twenty years. Indeed, even today, a Mercedes Benz is 98% robot-built, soon to be 100%. Large retail department stores are laying off thousands due to automation and internet purchases. Even accountants can be replaced by faster more accurate machines that don’t want time off for a sick child. Dr. Schwarzblat brings these and other looming challenges to their logical conclusions, e.g., If dramatic technological advances can replace more and more human labor, resulting in more workers being let off, where will the consumer demand come from to buy all the potential new products and services?

Let’s review: Artificial or machine intelligence is intelligence exhibited by any device that perceives its environment and acts to maximize its chances of success at some goal like learning or problem solving. But what happens when the device(s) communicate with each other or go it alone. When Hal takes over the ship in “2001: A Space Odyssey,” we feel the chill when he quietly declares, “I’m afraid I can’t do that, Dave.”

And what dystopian future would be complete without relentless robots advancing on civilization like so many zombies.  We may even one day have a live-in robot to do all the odd jobs and chores we disdain. Robots can now construct a house in one day! Robotic automation will cut costs, drive efficiency and improve quality. Consider this exchange: “I don’t want to lose my job to an illegal immigrant who can’t speak English.” Robot says, “You won’t!” The current political promise to revive the coal industry is a dream, says Dr. Schwarzblat, and ignores the fact that robots can extract eleven times more coal per hour than a single miner. There are other concerns, more exotic you might say. Journalist Jenny Keene asks, “Should we ban sex robots while we have the chance?” Your guess is as good as mine…

Dr. Schwarzblat also wants us to consider precision medicine.  A medical revolution is underway that began with the Genome Project back in 1990 aimed at mapping a complete DNA sequence of the human genome.  Identifying all of the approximately 20,000–25,000 genes in the human genome has important implications for medicine and biotechnology. New understandings about specific diseases, new techniques for treatment, gene therapy and molecular medicine precisely designed with only one patient in mind—You.

But the risks for abuse are grave, warns Dr. Schwarzblat, including the temptation to try to engineer some sort of genetically perfect race, Aryan or otherwise. And what of extending life dramatically?  When would you retire---age 125? Not so wild a dream! The question remains: We know what we can do, but should we do it?

Ethical, legal and social concerns abound. Debate in the public square is tumultuous. Legislatures, courts and bureaucracies are notoriously behind the curve.

Neil deGrasse Tyson’s remark that “The Universe is made up of protons, neurons, electrons and morons,” drew a pained smile from Dr. Morris Schwarzblat.

Locally, Dr. Schwarzblat and his ministry are demonstrating one of the miracles of automation through a program called Jalisco without Hunger (Jalisco sin Hambre). The problem is staggering. At least one million 300 thousand people in Jalisco go hungry every day while tons of food are wasted every day. They live in food poverty.

Jalisco without Hunger aims to optimize through automation the activity of the food banks through a system that improves the collection, conservation and distribution of food in the Metropolitan Area of ​​Guadalajara and elsewhere in the state. Food banks now rescue seven percent of the food that is wasted. Each percentage point reaches 13 thousand people. “If we can save ten percent more of the food that is wasted in Jalisco, we will be able to support each of the families in food poverty. Automation will help us do it. Food for thought,” concluded Dr. Morris Schwarzblat.