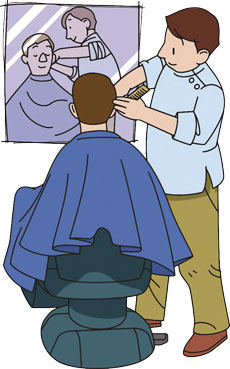 I knew moving to a foreign country would involve adjustments – some are expected and some less so. My wife and I have only been here a short time so much of daily life is a new adventure.

Yesterday I decided it was time for a haircut – my first in Mexico. I ventured out to a local “salon” and waited my turn. Once I got washed and seated, the stylist looked over my hair and casually asked if I wanted my ears waxed. Say what? I’ve never heard of this (or imagined it). Now I’ve heard about women getting waxed and some body builders doing it, but ears on an old married guy? I’m not convinced.

Honestly, I’ve never looked at guys ears so don’t have a frame of reference as to how ears should get groomed. I’ve always known that as men age our ear hair – as well as our eyebrows – grow and often look a bit disheveled, needing the occasional hack. It never crossed my mind to pay attention to ear hair past the occasional mowing when things get too unruly. Having ears as smooth as a baby’s butt never made it to my priority list.

I considered that maybe this is a routine part of male grooming in Mexico.  Being new to Mexico and not wanting to look like I didn’t know what I was doing, I let my curiosity get the best of me. I’ve never had anything waxed so I decided to give it a try.

The stylist came around with a big glob of brown stuff on her finger and jammed it in my ear, squishing it around. Carrying on a conversation like nothing was abnormal, she chatted a while with her finger jammed in my ear, then mid-sentence, without warning, RIPPPP! My head jerked violently. WTF? She starts working on my earlobe and any other nook or cranny she can access – squish, RIP, squish, RIP, squish, RIP. My ear burned.

I wasn’t crying yet. I took a few deep breaths. I gritted my teeth and acted nonchalant. Being this far in I decided to let the other ear be abused and just deal with it. Is this what makes Mexican men seem so macho? I took a slow deep breath and faked a smile as she repeated the process on the other side. I know women get waxed regularly so I had to act cool even while I was cringing inside.

When in Mexico you try and adapt to the culture. The culture is macho and male and I like to think of myself as possessing some of those stronger masculine traits; however, I do have limits – like when she offered to wax my nostrils. Ain’t no friggin’ way!