THE DAY THE FBI KNOCKED
(A True Story) 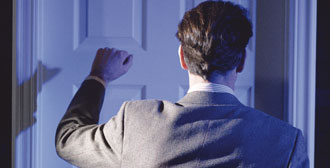 I was enjoying a quiet day at work in Arlington, Virginia, when my boss called me from his office in another building. “Bev, come over to my office right away!” No explanation or details were given. When I arrived at the Security Desk of the Police Department (where my boss’s office was located) the receptionist said, “Hey, two FBI guys are asking for you!” My heart jumped and started pounding.  Me?  Why?

I hurried upstairs and found two strange men sitting in my boss’ office, looking very serious and somewhat threatening. “They want to question you, Bev,” my boss said. We were immediately escorted to a private interview room in the Vice Control Section of the Police Dept. – my boss was its Chief, (Captain) and I was an accountant for a grant program administered through this agency.

The two FBI agents showed me their badges and began to question me.  “What do you know about Nasser A.? Where did you get information about him and his activities?” I told them that Nasser was engaged to my niece, Susan, and her family had been suspicious of him for many years.  “But,” I said, “I cannot reveal the name of the person who gave me some information about him as it was given in confidence.”  They pursued their questioning and ended with, ”if you don’t tell us who he is we will get a subpoena, and it won’t be fun.”

My hands and voice were shaking, my stomach felt like a rock, nerves and fear caused me to make the decision, and to assume I had no choice, to reveal the name of my friend, an ex CIA operative (so I was told) who was currently working for another Federal agency.  I don’t think he ever forgave me for caving in, and I now believe the subpoena threat was just that, a blind threat.

The back story of this episode was that my sister had been very concerned about her daughter’s relationship with Nasser, a Palestinian, now a US citizen, whose job seemed ambiguous, and who traveled often, to the Middle East to see family in Jordan, and also for business reasons to Egypt and Morocco. Over the years they had been together, engaged, and then not.  Susan even visited Jordan with Nasser, but during those two weeks he never introduced her to his Mother!   Many things made Susan’s mother and father and aunt very concerned and suspicious.

My sister had often expressed her fears and finally said to me “I wish we could get some damning information about him so that Susan, maybe, would be willing to leave him.”  I told her of my friend who had “contacts.” Hopefully, she asked me to please ask him to do a little “spy work” for her. The result was most disturbing. I was told the Israeli Massad had a file on him, he traveled on two passports, US and Jordanian. The CIA had info on him and suspected the restaurant he recently opened was used for money laundering. Nasser also had a safe in their home, which Susan had no access to, and his travels were often sudden and unusual.

The family chose to have Susan’s father tell her the bad news and suggest she end the relationship.  It did not work. She was outraged and unwilling to believe there was anything suspicious or possibly illegal or conspiratorial about her beloved Nasser. As a result, she immediately contacted the FBI, (probably at the urging of Nasser himself), went to their offices in Washington DC and told them that all the accusations about Nasser were false. “He was an honest and patriotic citizen,” she stated. She also told them that I, her aunt, had provided her mother and father with this horrible, untrue information about her partner of many years. She was very angry, in fact enraged, and as a result would not speak to me for well over a year. I guess she did not realize that her mother had asked me for help on the matter.

I never saw the FBI agents again, but know they contacted my ex CIA friend who also was angry and never spoke to me again, -- at least not for several months.

Were the suspicions warranted? I think so, but have no proof.  Soon after this episode a handsome Navy officer actively pursued Susan. They were working on a project together and had many reasons to be in regular contact. Within a few months, she was dating him and a few months later accepted his proposal of marriage. I sincerely think that she was able to open her heart and mind to this intelligent, honest, caring family man because I had planted a seed of doubt about Nasser in her subconscious.

In fact, Nasser revealed his true character by making many threats of violence against her and her fiancée before the wedding and on that day.   Fortunately nothing untoward happened then or subsequently.  I suffered through many months of estrangement from my niece, but I believe I did the right thing.  True love had won and continues to this day.