In Defence Of Mary

A rebuttal by Rico Wallace 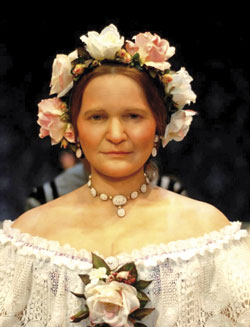 I feel compelled to stand up for Mary Lincoln, being from Illinois. This is my opinion from the little I know about her. The first and most obvious thing, to me, is to forgive her for anything that concerned her after the night in Ford’s theatre, when she was sitting next to her husband, Abraham, and he was shot in the head. She ended up in an insane asylum and eventually died, cloistered, in her sisters Springfield home.

Was there no joy in the Lincoln’s marriage? They had a loving relationship. There are many letters between them, talking about how much they missed each other, while Abraham was often away from home on business. She sacrificed terribly, when he was working 24/7 during the war. They were crushed by the death of two young sons, the joy of their life. There was happiness and love in the Lincoln marriage.

Was Mary a compulsive shopper? She was a women, ok? Only kidding. It is true that it was a problem and Abraham was upset about it. Mary grew up in a wealthy family. She was educated and had a few rich boyfriends. Abraham Lincoln was never rich. I think his finances were tight most of his life; poor kid, shopkeeper, struggling lawyer, politician. Mary was a rich girl with no money.

Was Mary a busy-body? I think she may have been the great woman behind the great man. As a young lady, Mary was involved in the social circles of wealth and politics, and she loved it. As a young lawyer and aspiring politician, Abraham was on the fringe of that social circle. I think Mary saw something in Abraham that made her believe that he could succeed and that she would be the one to help steer him through that thorny path; and she did, all the way to the White house.  A lot of the criticism of Mary came from disgruntled Washington “swamp” creatures.

Was Mary an ‘”airhead’”? Mary Lincoln was highly-educated, known to be very intelligent, intellectual and sophisticated. She was a good hostesses and partner. She could discuss and was interested in politics, the arts, science, history, geography and you name it. She was the first to hear Abraham’s great speeches and was probably a collaborator.

The Lincoln home and neighborhood in Springfield Illinois is frozen in time. You can tour the home and many others are open to go in and roam around.  The Lincoln Museum is very interesting and you can tour the old Capital building preserved from the 1850’s and see where Lincoln sat and gave many famous speeches when he was an Illinois Representative.

Editor’s Response: I’ll concede one important point: It was through Mary Todd Lincoln that Benito Juarez’s young and totally inexperienced emissary, Macias, was able to convince the president that America’s best interest lay in helping to defeat the French invasion of Mexico. This extremely vital moment in the history of both countries was recently brilliantly set forth in Prof. Michael Hogan’s book and play, Lincoln and Mexico.