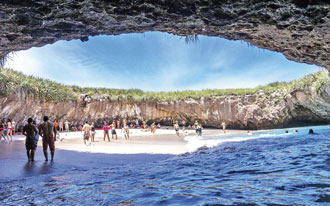 During economic downturns, companies consolidate, merge, downsize and lay off excess workers. Some of the recently unemployed will find other jobs, some will choose early retirement. But where? A milder climate would be nice. How about Mexico or Central America? But what would they do all day? To answer that question, they look at recently published books by writers who have already moved south of the border. One book they will find useful is A House Far South, In Mexico, by Elaine Dandh.

When the author and her husband retired from a Massachusetts academic community a few years ago, the life they found in a Mexican village was very different from the New England home they had so recently left. They rented a sprawling colonial hacienda house surrounded by Mexican neighbors who had lived in the area for generations. This amusing memoir of gringo cultural adjustment will give other North Americans the benefit of their experience. Of their move, she writes:

“One gray day in October, in Worchester, Massachusetts, my husband and I were on our way to work. Ken would drop me off at the junior college where I labored to stave off illiteracy among the young. Then he would drive two miles farther to the huge insurance company where he did something complicated with numbers...”

Stalled in rush hour traffic, they watched a flock of Canada geese flying south. Suddenly, the Dandhs wanted to follow those sensible birds that were abandoning ice and snow and gray, windy winters. Why stay in dead end jobs in the north? Why not bask in Mexico’s warmth? Colleagues and relatives registered doubts and disapproval, but Elaine and Ken cleared the clutter from their lives and moved to Mexico in December.
The book takes the form of a journal, with incidents occurring from month to month through the twelve chapters that, while somewhat disjointed, give a sense of changing seasons and community activities throughout the year. Finding suitable help for housework and gardening is revealing. Instead of the one gardener they expected, Jose and Maria’s whole family arrived with their tools and their boom box. Their wonderful maid was hauled off to jail on suspicion she had murdered her missing husband. She had said he was in el Norte, but his body was found in a well.
Fluency in Spanish helped Elaine develop relationships with her help and her neighbors. Many North Americans tend to cluster in retirement enclaves where only English is spoken. The Dandhs found their place in a village where few foreigners live, and have enjoyed Mexican parties and weddings, shopping at street markets, even participating in their first Christmas posada. Dressed for their parts as Balthazar and Mary Magdalene, they arrived at the posada site promptly at the appointed time.

A House Far South is a well-written book full of wit and wisdom about modern Mexico and the Guadalajara area where many retirees have settled. Elaine Dandh is a perceptive observer who writes with a light touch. The narrative moves along at a pleasant pace with just enough detail to give the reader some idea of current life in Mexico.

(The book can be purchased on amazon.com)