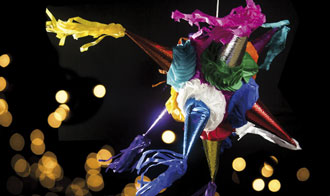 You can always count on the fun-loving Mexicans to get the most out of any fiesta, whether sacred or profane, but they outdo themselves in making the winter holiday season stretch all the way to February. Though many of their customs originate in their own past, and others have been borrowed from Europe and the Far East or, most recently, from their North American neighbors, they have a way of making each element uniquely their own. Parties and posadas, parades and pageants, pastorelas, piñatas and poinsettias all play important roles in the festivities. 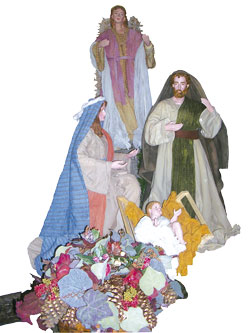 December 3rd sees the holidays off to a solemn start with the fiesta of Our Lady of Guadalupe which culminates nine days later on her special day, December 12th. Ever since she appeared to Juan Diego on the hill of Tepeyac in 1531 and left her image indelibly imprinted on his mantle, this Virgin has been the patrona of all Mexico. The natives’ immediate acceptance was partially due to her dusky skin, so like their own and so unlike the milk-faced dolls imported from Spain. But what made her peculiarly their own was her appearance in a place sacred to their old religion near the time of the winter solstice, plus the fact that she is surrounded by golden rays that identified her as an emissary of the sun god, the most important deity in the pre-Colombian pantheon.

Saint Francis of Assisi is credited with creating the first nacimiento, or tableau of the holy birth, in 1223. The idea caught on throughout the Christian world and Mexican converts adopted it with enthusiasm as being closely akin to some of their own rituals. There are, however, some slight differences from the original as, for instance, in having Satan lurking somewhere about the scene hoping to trap the unwary. In Mexico they go up in early December and stay around long after Christmas. Visitors are usually impressed by the detailed completeness of such scenes; especially those featuring full-sized figures and live animals, but puzzled by the absence of several important characters. When it is explained that the baby Jesus will not be born until Christmas day and the Three Kings are still traveling and cannot arrive before Twelfth Night, they often go home wondering why they have always done it wrong in Podunk. 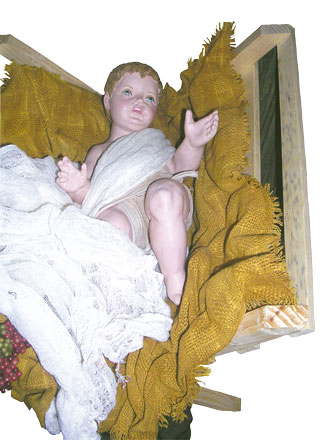 Another omnipresent feature of Christmas in Mexico is the poinsettia or La Flor de la Nochebuena (Flower of the Holy Night) which was also sacred in pre-Columbian times. They called it Cuetlaxochitl (leather petals) and considered it sacred to warriors who died in battle and who, as hummingbirds and butterflies, would return to earth to sip its nectar. 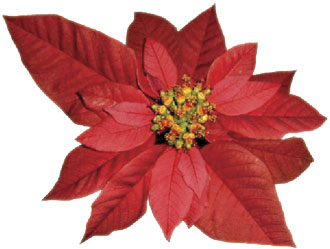 Throughout history priests have been canny enough to incorporate at least some elements of the religious beliefs of a conquered people in their rites to make them more palatable. The Egyptians did it; the Greeks did it; the Aztecs did it; and the Catholics were certainly past masters of the art. When they noted that their future converts were accustomed to commemorating the winter solstice with parades, dances and morality plays in honor of the sun god, they immediately instituted a similar celebration with a Christian theme and the Posadas were born. Every evening, from December 16th through the 24th, the streets of even the smallest village are crowded with the faithful following Mary and Joseph in their search for shelter. Sometimes only images are carried. More often it is a young girl seated on a burro led by a boy in Arab robes who head the procession. Special songs are sung at each “inn” begging refuge which, time after time, is refused until finally an innkeeper welcomes them. Then the party begins. 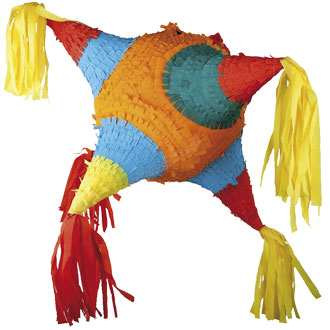 There is always a piñata for the children, a fragile clay jar covered with crepe paper in fanciful designs and filled with fruits, nuts, candies and small toys. One after another, blindfolded stick wielders swing wildly until one finally succeeds in breaking the jar, and there is a mad scramble for the goodies that rain down. This custom originated in China, but Christianity added its own meanings. Although they now come in every form imaginable, from airplanes to zebras, the traditional piñata was spherical with seven conical protrusions trailing paper streamers which represented the Seven Deadly Sins. Its destruction symbolizes the defeat of Satan himself and the treats are the rewards of that moral victory. Traditional foods like tamales, buñuelos and ponche are enjoyed before the party makes its way to the church for mass. 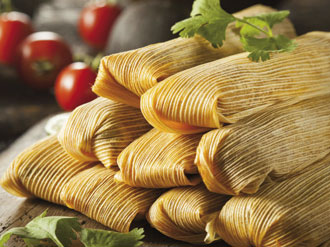 There they might watch a pastorela performed on the church steps. Here again we find echoes of the past. The ancients often reenacted important historical episodes as part of their religious rites and the missionaries adapted this to Biblical events, in this case the birth of Christ. Whatever the schedule, each evening builds up in intensity and fun until it reaches a crescendo on Christmas Eve.

Except for a special mass, Christmas day is usually devoted to recovering from the final party. Traditionally, it is not even a day for exchanging gifts, though that, too, is changing. On December 28th, the festivities start up again with the Day of the Innocents. Why this terrible day, when Herod ordered all newborn babies slaughtered, should be celebrated by hoaxes and practical jokes is a mystery. Most of the high jinks are aimed at persuading the unwary to lend some article which, by tradition, need never be returned.

New Year’s Eve and New Year’s Day are purely secular and mostly modern except for some overtones of celebration of the sun god’s moving north again after the solstice. January 6th, however, is a very important day. This is El Dia de los Tres Reyes, when the Three Kings, Caspar, Melchior and Balthazar, finally reached Bethlehem bearing gold, frankincense and myrrh.

It is the Magi, not Santa Claus, who bring gifts for the children in all Spanish-American countries. Special foods are served, including an egg cake resembling a giant bagel bright with dried fruits and sparkling with sugar. A tiny ceramic figure of the Christ Child is baked inside. 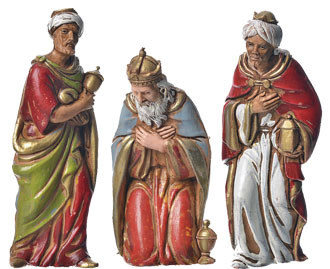 The lucky, or unlucky, person who finds it in his portion is obligated to host the final party of the season on February 20th. He is also responsible for providing the christening dress for the infant Jesus. El Dia de la Candelaria, also known as the Day of Purification, is when, the obligatory forty days after his birth, Mary and Joseph take their new babe to the Temple to be blessed The winter Holidays are finally over... but watch out for Easter! 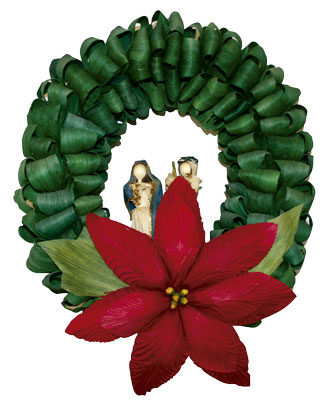