Adam Applebaum’s hair was gone except for a few intermittent tufts. Already sparse on top in high school, his nickname had been Applebald. He had been a lonely kid, a friendless teenager and now was a miserable adult. His strict parents had wanted him to become a doctor but blood made him swoon and not in a good way. Passionate about little, he, at least, liked computers and worked as an I.T. specialist for an insurance company.

Staring in the mirror, he removed his spectacles, grabbed the can of shaving foam and squeezed the lever with flourish. It was unfortunate that he had not checked the direction of the nozzle since the foam dispensed all over his shoulders and neck. “Dammit,” he yelled.

Bast, his cat, yawned. As a direct descendant from the divine felines of the Nile Valley she held herself in the highest regard above her hapless owner and the hideous pit bull he had recently adopted from the local pound. 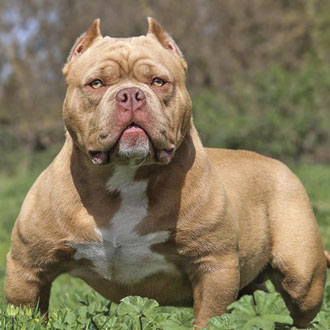 On cue, a burly mutt came running into the bathroom and fixated the man with a beseeching gape. To rile him and to show him who was the chosen one, the cat jumped up and rubbed her body against Adam. When she sat down she did a slow swish with her pointy, long tail while scrutinizing the canine’s relaxed ears, the tell-tale sign, beside the tail position, of a dogs’ mood.

“You are stupid AND ugly,” she tittered and performed a stellar spine arch while splaying her paws. After seating herself, she recommenced whooshing her tail. “Well,” she drawled, “I’m the only one who snuggles up to him at night. You have to stay out because you snore.”

Adam was busy scooping up the lather and slapping it onto his head. After he grabbed the razor, he wiped the feline off the counter with his elbow. When she landed on top of the pit-bull she cuffed him behind his ears.

“Move,” the queen hissed and slid off.

Sitting beside each other, he looked up with admiration and she was mesmerized by the droplets of water dripping into the sink. The graceful Abyssinian with her warm deep reddish-brown fur, slender body, long legs and almond shaped green eyes; unlike the sable pit bull whose stubby, muscular body signalled brute strength. His startling blue eyes were set wide apart on his flat skull and his long, red, beefy tongue lolled back and forth while dripping saliva all over the scuzzy tiles. 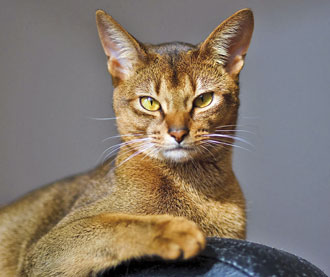 “Listen dude,” Adam said while sliding the blade over his head. “Explain to me why you sit in front of my bedroom door all night and stare? Are you upset because your sister is allowed on the bed and you’re not?”

Instant retching sounds were coming from the cat’s throat.

“I was made into a sacred animal by priests in Egypt, an object for deification. I am Bast, goddess of cats.”

After giving the dog a withering stare, she coughed up a hairball and kicked it toward him. Odin sniffed it and looked bewildered. His glossy coat reflected the glare of the lone light bulb above the mirror as he turned his big head in her direction while his doleful eyes echoed his confusion at her hostility.

“My best friend is a Maine Coon silver tabby,” he growled. “I don’t know what happened to her.” He whimpered. Adam stopped shaving and looked at him in the mirror.

The canine hung his head and sighed.

Adam’s cell played ‘she drives me crazy’ and admiring his new gleaming skull with a few pieces of toilet paper stuck onto some bleeding nicks, he answered.

“You never call,” his mother said on speaker.

The pup slumped over on his side and placed his front leg over his ear in an attempt to minimize Mrs. Applebaum’s shrill voice while the cat commenced licking her paw and wiping around her ear.

“Rhoda’s daughter got a divorce. I could put in a good word.”

The mail slot rattled and Odin ran to the door to bark at the falling envelope while the feline followed him. “Gee, and they named you after the ruler of Valhalla?” she chirped. “Can’t you at least try and be more god-like?”

“Just letting Adam know that he’s got mail.” he woofed and lifted his right eyebrow. “That was my job at my last house.”

Bast scoffed at that and sashayed down the corridor.

“Ma, I can find my own dates,” he said. “Isn’t the daughter a size twenty-four and bald?”

Adam almost sliced off the top of his auricle.

The animals had returned and re-taken their positions on the floor.

“Say hi to your grandma,” Adam said with a chuckle and held up the phone. Nobody reacted, including his mother, who, in a rare moment stayed silent.

“The cat is not happy that I brought the dog back from the pound,” he said and accompanied by his entourage he walked over to his shabby sofa with the tattered mismatched pillows. A dreadful gray piece of furniture that had been in his parent’s basement for as long as he could remember. It was lumpy to sit on and the mildew scent added nothing to its appeal. He placed the mobile on the messy table top.

“She didn’t cover her poop in the box for days. A clear sign of aggression,” Adam informed his mother.

“I’ll never know why you want filthy animals in your house,” his Mom said. “You’ll end up with fleas.”

Her son picked up the dirty glass from the table and sniffed. After determining that some tequila remained, he gulped the liquid down. On his hands and knees, while searching for the bottle underneath the sofa, he was delighted to discover that it was half full. Contemplating if he should go back to the fridge and get some ice cubes, he opted to dispense with formality and topped-up his tumbler.

Bast stood up and turning around she lifted her tail to stick her butt into Odin’s face.

“Hey,” he woofed, somewhat startled, “you like me now?”

“Odin hasn’t slept since I got him from the pound three weeks ago. He sits straight up and watches my bedroom door all night. During the day, if he lies down, he keeps one eye open.”

“Oy,” his mother said, “Goldie told me about a pit bull that ate his owners during the night. Or was it a werewolf, I can’t remember.”

Adam took a swig, swirled the booze and rolled his eyes.

He got up and walked to the kitchen with his two housemates brushing against his legs, following him. All the ice was stuck together in the Ziploc bag he kept in the freezer and he dropped it on the floor to step on it. Instead of separating the cubes, the bag burst, discharging the pieces over the floor. After he picked-up a couple and dropped them into his glass he eyed the remainder, shrugged, and left them to become drinking puddles for his pets.

“I’ve gotta go, Ma, I’ll call you tomorrow,” he said and hung up before his mother could object.

“How about some pizza?” he asked his companions and took the dog’s wag and the cat’s purr as consent.

All three of them were standing at the door when the delivery guy arrived. He scrutinized the pit bull, who stood back as if he did not like the open hallway door.

“He won’t bite,” Adam said when he saw the man’s expression while busy looking for change.

“Is that dog from the shelter on Waterloo Street?” he asked.

“Yeah,” Adam acknowledged, still rummaging through the pockets of his sweatpants and coming up with lint after he had pulled them inside out.

“Does he sit in front of your bedroom door all night, staring, and never sleeps?”

Adam stopped and looked up. “Yeah. How do you know?”

Odin’s tail had risen and Bast, who was an avid animal TV show enthusiast, ascertained that the angle was slightly to the right, which meant he was not going to attack. She was tempted to scratch his butt to see if he’d maul the pizza guy and liven things up a little, but decided against it.

“My cousin adopted him but returned him after a few nights. Freaked him out.”

He ogled the dog standing at the back of Adam, who reached down to massage behind Odin’s ears. Jealous, the cat reconsidered her idea.

“Anyways,” the man said, “after he found out the reason, he was sorry that he returned him. Turns out that after six years, his original owner drugged him to sleep and brought him to the shelter at midnight. When he woke up the next day, he had no idea what had happened to his people. It seems like he’s afraid that a new family would get rid of him too, so he stays awake and watches.

Adam’s rule of no dogs in the bedroom was cancelled that night and even Bast deigned to have Odin share the bed. Truth be told, she rather enjoyed curling up underneath his broad chin. 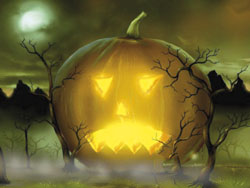 Nearly Midnight
Nearly Midnight By Allen McGill   Salina led the way along the pathways between the headstones of the deserted cemetery. The air was clear, brisk