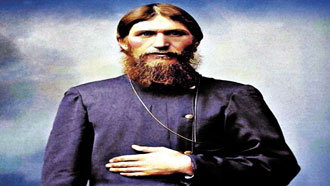 Rasputin was a reputed psychic and faith healer. The Russian Imperial family’s only son and heir to the throne, Prince Alexei, was a bleeder (hemophilia). In 1907 Czar Nicholas II invited Rasputin to the royal palace in St. Petersburg. Alexei fell ill, and doctors thought he would not live, but Rasputin went into the sick room and miraculously revived Prince Alexei, aged four. To this day, doctors cannot explain how he did it. In any case, the peasant Rasputin became part of the royal entourage and quite influential. Alexei’s mother, Czarina Alexandra, believed he was a holy man.

Rasputin carried baggage, however. He committed criminal acts of drunkenness and stealing horses and the people wanted to run him out of town. He avoided ostracism by promising to go on a pilgrimage and walked 260 miles to a monastery where he studied the Bible and theology under a famed monk.

Rasputin’s wife tolerated his womanizing by saying he was man enough for more than one woman. People bribed him for access to palace officials. Rasputin believed that true Christianity required humility and that a perfect person could not experience humility. Rasputin chased women, drank to drunkenness, and committed criminal acts in order to achieve the imperfection necessary to maintain his Christian humility.

The First World War was going badly for the Russians because of poor leadership. Rasputin declared that it was necessary that Czar Nicholas take personal command of the war effort. But the czar had no military training and disaster was the result, with many Russians killed or coming home with missing limbs. Everybody had a relative or friend who was a casualty of the mismanaged war with Germany.

With the czar absent, Czarina Alexandra took charge of domestic affairs. She practically worshipped Rasputin, which, in effect, meant that he ruled Russia. If he sensed political opposition from a minister, he simply had the czarina dismiss that official. Russians began to suspect Rasputin and the czarina secretly wanted a separate peace with Germany, thus breaking treaty agreements. Some nobles decided the only solution was to murder Rasputin.

Prince Felix Yusopov was one of the wealthiest men in Russia and was quite handsome and happily bisexual. He boasted openly of his homosexual escapades. He befriended Rasputin. What kind of relationship they had is controversial, but for a time, they were seeing each other daily. Yusopov charmed Rasputin into a visit to his palace in the winter of 1916. Yusopov promised a possible sexual encounter with his beautiful wife (who would not even be there). Other nobles, part of the conspiracy, entertained Rasputin with cakes and wine that were laced with enough cyanide (provided by a doctor) to kill five men. The conspirators became alarmed that Rasputin seemed immune to the poison.

In desperation, Yusopov shot Rasputin, who fell to the floor. The conspirators went into another room to celebrate. After a while, something made Yusopov go check on Rasputin. He was still on the floor, with no pulse. But then one eye opened and he jumped up and grabbed Yusopov around the neck. Yusopov freed himself and ran to the other conspirators, shouting, “He’s still alive!” Rasputin began running across the courtyard.

One of the noblemen gave chase and shot Rasputin, and again, he fell. They dragged him back to the palace where Yusopov, in frustrated anger, beat Rasputin with a metal dumbbell. It would soon be dawn and they had to get rid of the body. They went to the river by the palace to a prearranged place where there was an opening in the ice. They bound Rasputin’s arms and legs and wrapped the body in a heavy cloth and dumped it in the river. But they forgot to attach weights to the body and it emerged downriver – with water in the lungs, which suggests that he drowned!

The conspirators were the czar’s kinfolks, so their only punishment was exile. The czar unknowingly did them a great favor, because revolution was coming and Yusopov was able to live out his life in France until he died in 1967.

Back home, the Bolsheviks murdered the entire Romanov family in 1918, including Czar Nicholas II, Czarina Alexandra, Prince Alexei, and his four sisters – to make certain the monarchy could not be restored. Rasputin, though devoted to the Romanovs, played an important role in their fall and the rise of Vladimir Lenin and Communism.