(and her son, Jean Baptiste Charbonneau) 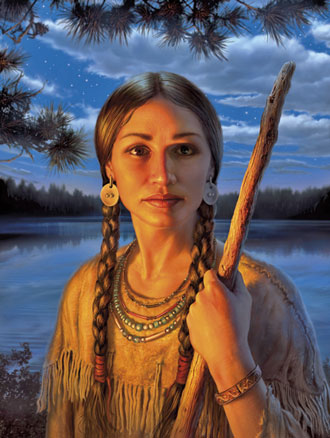 Sacagawea, the most celebrated woman in American Native History, immortalized by 23 statues across the parks of the USA shares the same riddle as that of her son. They both have two grave sites. A controversial subject, about which many books have been written supporting both versions of the conflicting dates of their deaths, and their final resting places.

The Sacagawea legend is well known- a brief synopsis: She was born in 1788 of the Lemhi Shoshone tribe, near Salmon, Idaho, in the Lemhi County. In 1804, when Lewis and Clark embarked on their famous expedition to the Pacific Coast, through unchartered territory, they chose Sacagawea to accompany them, with her husband, Charbonneau, as guide and interpreter (her knowledge of Hidista and Shoshone language would prove invaluable later on).

Two months prior to the departure, she gave birth to a boy, named Jean Baptiste, and Clark, who was eventually devoted to the child, nicknamed him Pomp. Sacagawea carried the baby on her back for thousands of miles between 1804 and 1806.

Clark would later write that the presence of Sacagawea and her child played an integral role in the mission: perceived as a “white flag of truce” so that hostile tribes would sense their peaceful intentions. After the expedition Clark offered to educate little ‘Pomp’ and he eventually adopted him: Jean Baptiste spent years in Europe with a Royal Family and learned several languages—but that is another story.

Little is known about Sacagawea’s life after the expedition, but records show that she died on Dec. 20th 1812, aged 25, at Fort Manuel, SD. A John Luttig, a clerk, wrote in his journal “The wife of Charbonneau, a snake squaw, died of putrid fever.”  He did not record her name and it was known that Charbonneau had another wife named Otter Woman. Clark himself, a meticulous record keeper, wrote in a list of expedition survivors in 1928, “Se-Car-ja-we-au  DEAD”

Now we fast forward in history: Grace Raymond Herbard (1861-1936) was a prominent academic in Wyoming; a prolific writer, political economist, who spent years seeking out first-hand accounts of the pioneers. She wrote a book on Sacagawea in which she expressed the belief in the Shoshone oral history that, in fact, Sacagawea died in 1884, on the Wind River Reservation,WY, aged 99. One critic wrote “Undeniably long on romance and short of hard evidence suffering from a sentimentalization of Indian culture.” On the Wind River gravestone is the following: “ Identified, 1907, by Rev. J. Roberts who officiated at her burial” who later quoted that he just buried an old Indian woman but was told by Grace Hebard, that she was named Sacagawea. On one side of the grave there is a marker for her son, Jean Baptiste that reads, “Jean Baptiste died on this reservation in 1885, and is buried west in the Wind River mountains.”

More is known about Jean Baptiste, who led an extraordinary life: he died in Danner, Oregon, now a ghost town, on May 16th, 1866. There is a large marker headed under Oregon History that states “This site marks the final resting place of Jean Baptiste Charbonneau….” Again, Grace Herbard claimed he died on the Wind River reservation. The mystery continues to this day.