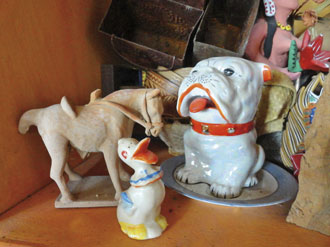 I dreamed last night that we were clearing out my mother’s house. The front doors of all the kitchen cabinets had been removed and I was puzzled about this. On the mantelpiece, I found China bulldog after China bulldog that was a replica of one my mother had told me to take home with me when I cleared out the house after my father’s death.“ Judy asked for this. You can fight over the rest.” Said a note taped to the bottom. A mayonnaise jar, it was of white glazed ceramic that had a rainbow sheen. Its head came off as a lid and its bright orange tongue was the handle of a spoon. The body fit into a depression in its saucer that had the outline of the bulldog’s feet and bottom so it nested a bit.

One of my first memories was seeing it sitting on the small triangular shelf in our kitchen. My mother never used it and later, in newer houses where it didn’t suit the decor, it always sat within a cupboard. My mother was too modern for China cabinets or knickknacks that didn’t match the color scheme. When I was small, her taste went to magenta and chartreuse. Beige and pink and turquoise marked the seventies, the turquoise and pink traded in for avocado and burnt orange in the eighties and back to a more understated green and beige in the nineties.

Whatever the color scheme, the bulldog never quite fit in, but it was the one object asked about by both of my sisters after the Loma Prieta earthquake. I was living in a house near its epicenter, and the bulldog had worked its way from the back of my kitchen cupboard to sit teetering on the edge, but it had not fallen. It was one of the few things in a house packed full of art and artful objects that I chose to bring with me to Mexico.

I’d like to say that it has assumed a position of importance in my house in Mexico, but sadly, the China bulldog just never quite seems to fit in to the mainstream. It has sat on a shelf in my studio for the past twelve years, somewhere near the back where it is safe but unseen. But for some reason, if I were to be able to take one more object from my house, the China bulldog is what my mind falls upon. Perhaps it is time to think about why.

I often dream about a subject that I end up writing about the next day. For some reason when I start with that dream topic, it is never very difficult for me to begin the day’s writing. In this case, once I’d settled on the bulldog as my topic, I immediately remembered that in my dream I had found five or six bulldogs on my mother’s mantel. Some were without bodies, all without their dishes. Some were smaller than others and lacked the brilliant sheen or bright colors. One seemed to be almost crumbling, as though it had been under water for a long period. All were missing their tongues.

In the dream, I imagined my mother combing second hand stores and never being able to resist whenever she found a bulldog in the same shape as the one her older sister had given her when she was a child. It’s been at least 100 years since she received that strange gift that was the only remaining thing that seemed to have been brought with her when she moved first from Missouri, then to Kansas and then to South Dakota, to marry my father.

She told me no stories about it and as I think about that, I realize she told me few stories at all. Not about her wedding or my birth. The stories in my family all centered around my father while her stories seemed safely tucked away on a shelf like the China Bulldog. Perhaps that is why that one piece of all the pieces of my mother has assumed a center place in our memories. I know that my middle sister, who lived in the same town as my mother for the last six years of her life, has mourned her loss the most over the years. My oldest sister, who was estranged from Mom for the last twenty years of her life, is in the throes of Alzheimer’s and so never mentions her at all.

It has been fourteen years since her death and I don’t think of her daily or even weekly, but every so often, something happens and the thought comes in a flash that I have to be sure to tell Mother about it; and for the past year, most of my poetry has been written in her joking, rhythmic cadence and rhyme. Perhaps some essence of her that has been steeping in me for over sixty years has suddenly reached its saturation point and must come out.

And the China bulldog? The dream? It is as though for all these years she has been trying to get it back, never quite replacing it but nonetheless not giving up the search. And I can’t overlook the irony that it is these less perfect incomplete bulldogs that she chose to put on her mantel. My mind ricochets as I continue to try to find the meaning of the dream. Perhaps it is my mother’s gentle prod ­­as she tries to tell me something about beauty or the adherence to a dream. Perhaps what the dream teaches is that it is time to leave perfect things behind and to get on with my life.

My mind ricochets as I continue to try to find the meaning of the dream.