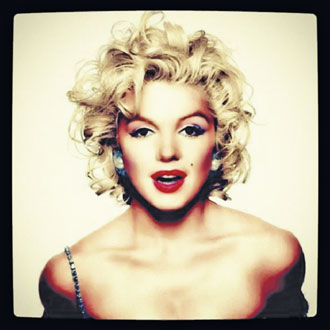 Lakeside Little Theatre is pleased to announce a special summer fundraiser, M.M. xx, to celebrate the 55th anniversary of the death of one of Hollywood’s most famous actresses, Marilyn Monroe.

Her death, like her life,  continues to be a mystery, shrouded in rumor and political intrigue.  If you’ve ever wondered what that last night might have been like, you won’t want to miss Lakeside Little Theatre’s pre-season production of M.M. xx.

Directed by Peggy Lord Chilton and featuring Candace Luciano as Marilyn, M.M. xx captures more than Marilyn Monroe’s doomed final act.  It also provides an intimate portrait of the life of the woman who was born ordinary Norma Jean Mortenson but died one of the world’s enduring icons.

LLT has added this special pre-season fundraising show to support the on-going upgrading of the theatre building and technical equipment.

The play opened on Friday, August 4. It runs through Thursday, August 10.  Saturday and Sunday are 3 pm matinées; all other shows begin at 7:30 pm.  There is no show on Monday, August 7.

Tickets are 250 pesos. Don’t wait if you want to see M.M.xx.   Email: This email address is being protected from spambots. You need JavaScript enabled to view it. or call (376) 766 0954. Tickets might also be available one hour before curtain time.

IT WAS A BIG DAY…

Members of the Ajijic Writers’ Group honored founder Alejandro Grattan-Dominguez last month for the 30 year anniversary of the group. A commemorative cake and laudatory speeches by Ed Tasca, Margaret Van Every, Mark Sconce and many others were followed by the introduction—courtesy of Mel Goldberg hauling it across the border—of a new lectern, and now can read their work while standing up. 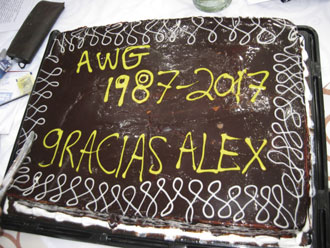 This isn’t just any lectern—it carries a plaque dedicated to Alex and reads: “The Alejandro Grattan-Dominguez Lectern—In appreciation for founding the Ajijic Writers’ Group and fostering, mentoring and promoting Lakeside writers.”

Some member of the crowd claimed that after ten years the lectern will convert itself into a walker. We’re looking forward to seeing that happen.

Lou Raskin has lived in Mexico 12 years, the latest two at Lakeside. As a member of the Open Circle Steering Committee, he oversaw the development of the website, which he currently maintains. He earned degrees from Naropa University, Boulder, CO, in Transpersonal Psychology and in Ecology. The two were integrated into the study of Ecopsychology, the relationship of the human species with the natural world.

August 13  Finding Your Way to Wellness

Marlowe will talk about the frustration of not being able to sort out all the things one needs to know about how to stay healthy and where to get help in treating an illness naturally.  One day low fat is good and the next day we learn we should be eating butter!  Marlowe will shed light on these issues and share the information she has gathered over the years with those committed to taking control of their own health and wellness.

Marlowe is a Certified Health and Wellness Coach, having completed year-long studies with the Institute for Integrative Nutrition in New York. She is also certified as a Digestion Specialist through Holistic Nutrition Labs and is presently working on certification for Functional Medicine Coaching.

August 20  More Than a Feeling

Human emotion has long been considered too subjective to be studied by science, but the relatively new discipline of Affective Neuroscience is changing all that. Learn what the latest research says about why we have emotions, how they can help or hurt us, and how to develop your “emotional intelligence quotient.”

Sandy Britton is from Northern California. Her background is in software development, but she’s always had a fascination with the “computer” between our ears. She combines her love of brain science and public speaking to bring you this talk.

August 27  How Our Stories Find Us

In the world we live in today, with millions of people displaced by war or hunger—divided by conflicts and religion, divided by culture and by politics—sharing our stories may be one of the most important and generous things we can do.

Sharing our stories, talking together, communicating, is what makes us human. It’s what allows us to connect with each other, to understand each other. Without it we would be isolated islands that had no concept of how others felt or what others experienced.

Rachel McMillen is both a writer and an adult educator. Her Dan Connor mystery series has been nominated for three awards, and her workshops are always in high demand.

In September, we celebrate Independencia, Mexico’s great struggle for freedom from Spain. Did you know Mexico’s Paul Revere was a woman? Or that  George Washington was a long-haired hippie who loved wine, women, and song? Jim will talk about the vivid personalities and dramatic events that launched Mexico as an independent nation. 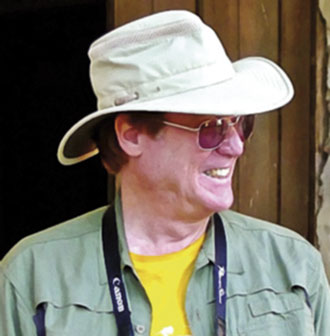 Photo-Journalist Jim Cook and his wife Carole moved to Ajijic in 2007. Since then, they have traveled all over Mexico and Jim has intensively studied the country’s history and culture. Their photo-journal blog, called “Jim and Carole’s Mexico Adventure,” has attracted more than 1.5 million page viewers in over 130 countries on every continent in the world, including Antarctica. Jim’s stories and photos have appeared in a number of websites, magazines and books published in English, Spanish, Danish, and Russian as well as in a film soon to be shown on the History Channel.

All of these are actual performances recorded in stunning high definition before live audiences and shown on LLT’s 14x8 foot screen.  Amadeus and Buried Child have already been shown.  Still to come are: 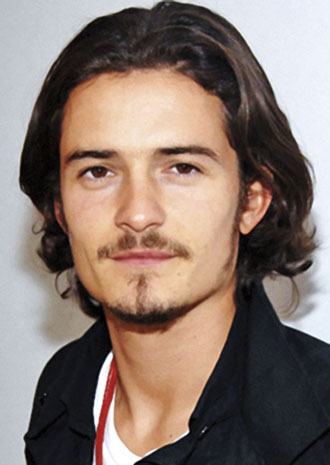 Performances are Saturday evenings at 7:30 pm and Sunday matinees at 3:00 pm.  Tickets (250 pesos) for the upcoming shows can be purchased two weeks prior and the week of the show at the LLT box office Wednesday and Thursday from 10am until noon; plus one hour before curtain.

The third and last Viva concert of the summer will be at 4 pm on Thursday, August 24 at the Auditorio and features Canadian mezzo-soprano Michelle Bogdanowicz with her Mexican-American husband tenor Ernesto Ramirez. 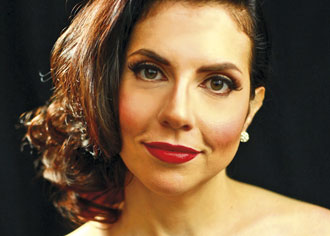 Join Ernesto and Michele on a musical journey of some of the most beautiful classics including De Falla’s popular “Spanish Songs” and famous Italian art songs by Testi, Donaudy and Caccini. They will also sing arias and duets from La Boheme, Carmen, Madame Butterfly and other operas.

Tickets are available at Diane Pearl Colecciones, Mia’s Boutique and at LCS Thursdays and Fridays from 10 to noon, for 300 pesos. For further information on Viva’s upcoming season, please visit their website at ajijicviva.org or call Rosemary Keeling att  766-1801.

THE DEACON AND THE BISHOP

It was a beautiful day last month when Jim Powers, member of Christ Church Episcopal, was ordained as a deacon by Bishop Lino Rodriguez Amaro, Bishop of the Diocese of the West in the Anglican Church of Mexico. 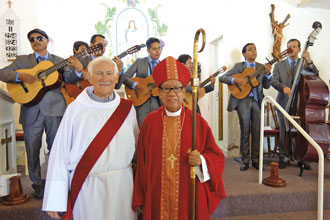 Christ Church is led by Father Danny Borkowsky. Numerous clergy, retired and active, were in attendance at the ordination, as well as Jim’s friends and associates. The ceremony was followed by a reception.

The next Naked Stage production is Opening Night, a comedy directed by Roseann Wilshere.  It runs August 25, 26 and 27.

The story: Jack and Ruth Tisdale celebrate their 25th wedding anniversary with an evening at the theatre. It’s a dream come true for Ruth and an imposition for Jack, who would rather be at home watching the World Series. However, after the events both on and off the stage that fateful night, their lives and those of all involved are irreparably altered.

EAT SOME RIBS AND SAVE A LIFE

It takes $4000 to ship a load of fire and medical equipment from Canada to Lakeside. This equipment will be distributed to fire departments and first responders in Jalisco and bordering states.

To support this effort, the Lakeside Assistance Group is sponsoring a barbecue  held at the Central Cultural Gonzalez Gallo (Old Train Station) in Chapala on Saturday August 26 from 1-5 pm. The ticket donation is $250 pesos and includes a BBQ rib plate with two sides.

So far three large containers have been imported and the contents distributed to 47 different departments based on need.

Tickets can be purchased at the Tuesday Market, at Diane Pearl Colecciones, or by contacting John Kelly at 331-768-0676, Karl Dyer at 376-766-0365,or email This email address is being protected from spambots. You need JavaScript enabled to view it.. Please help raise the funds to support this worthwhile cause.

DIG OUT THOSE OLD BELL BOTTOMS

The joint is jumpin’ at Ajijic’s beautiful La Bodega Restaurant on Thursday nights, when Cindy Paul and Pancho Martinez (AKA aQuarius Duo) take everybody on their magical mystery tour back to the 60s and early 70s for a real love fest. 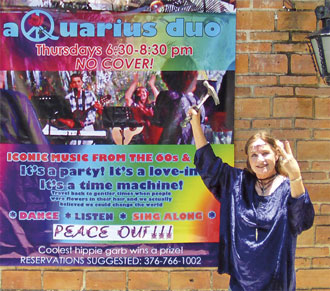 Get in the spirit by wearing your best tie-dye or fringe; you might just win the Coolest Hippie Garb prize for the evening! aQuarius Duo plays from 6:30-8:30 pm every Thursday. There’s no cover charge, but be sure to make reservations: 376-766-1002.

This is exciting news for music and ballet lovers.

The Jalisco Philharmonic Orchestra first fall concert in the Teatro Degollado will be on September 14. The Ballet de Jalisco performing Romeo and Juliet by Prokofiev will be in the third week of September.  Viva will confirm their fall bus trip schedule in August.

Also, Viva needs our help.  There are openings on the Board of Directors. If you have time and interest in helping them to run this lovely musical club, please respond to Rosemary Keeling at This email address is being protected from spambots. You need JavaScript enabled to view it.

Check Face Book to learn more and sign up to volunteer for this important event.

Want your favorite Lakeside non-profit charity to be considered for a grant up to 25,000 pesos?  This summer, the Foundation for Lake Chapala Charities new Grant Program will award four to six charities a total of 100,000 pesos. Application Deadline is August 31 and then the Grant Program Committee will select the recipients.  Summer 2017 applicants must be a registered Mexican AC or IAP organization.

The Grant Program thanks Charlie Klestadt’s salesmanship, the Starlit Paella fundraiser, and the generosity of our Lakeside community for making this new Lakeside initiative possible, and the Foundation wants us to know that 250,000 pesos will go into the community in 2017 and  there’ll be more to come in 2018.