The Game That Never Ends

A Novel by David Harper
Reviewed by Mel Goldberg 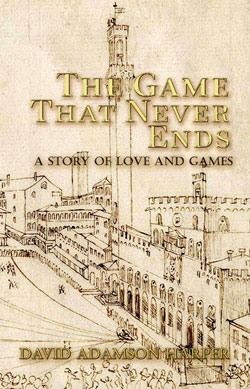 I have never played cricket nor have I played rugby, but author David Adamson Harper blends both with heavy doses of love and sex in his latest book, The Game That Never Ends. The story begins in San Francisco in 1962. The main character, Australian Sandy Gosse, thinks back over his life, from the day in Adelaide in 1953 when he first meets Alex. Over the years their love for each other has created many problems but now it has caused him to lose his wife Kate and his job as a stock trader in San Francisco. The author cleverly uses first person for flashbacks and third person for the present time of the book.

The book has several sections, each with a title that relates to Sandy’s experiences with life, women, travel, and his time at Oxford University, where he excelled in sport but struggled academically. For example, chapter two, “Adelaide 1953 - Audeamus” starts with a long, perhaps too long, narrative about a cricket game in which he stars. However, it is because of this game that he meets Alex and they immediately fall in love. It also introduces the reader to the term audeamus, which means let us dare, which becomes an abiding code word throughout the novel for their relationship. Chapter three, “Darlene,” relates how an older woman teaches the eighteen-year-old Sandy about sex and lovemaking.

The following chapter, “Naples 1954 - Alex” brings the reader back to their love story. As a result of their night together she becomes pregnant and this sets up the secondary theme of his exasperation with her Catholicism. Her mother takes her to Switzerland for an abortion and she now becomes obsessed by Catholic guilt and a desperate need for absolution of her sin. The novel moves deftly smoothly between Oxford, his games, and the love story. Sandy and Alex meet periodically over the years but never seem to be in the right place at the right time in their lives. When Sandy is free, Alex is married. When Alex finally becomes free, Sandy is married to Kate.

The novel is filled with memorable characters, like the flamboyant Mara, Alex’s gay Italian uncle who helps her through her difficulties, and Sir Charles Mills, Sandy’s very proper uncle in London who had been an aide to Winston Churchill. Other characters include Emily, who meets Sandy on a ship to England and who hopes to become a surgeon in London and the delightful Pippa whom Sandy meets at Oxford University and considers marrying until Alex reappears. Then there is Göran Persson, the cricket-loving Swedish friend to whom he turns after his debacle in San Francisco.

Even though the story takes place many years ago, the reader feels that it could happen today, in any place where a man and a woman from different backgrounds meet and fall in love. This book is about love and sex, with cricket and rugby in place of rock and roll. The author’s fast paced style keeps the reader engaged right up until the end.

But if you want to know what happens to Sandy and Alex and the many other characters that live and breathe in The Game That Never Ends, you’ll have to read the book! Soon available for sale at Dianne Pearl Colecciones for 300 pesos as well as from Amazon both in paperback and Kindle.

Ed. Note: For information on Mel Goldberg, Here are his links. Just click on any one. His latest novel Catch a Killer, Save the World here on Amazon