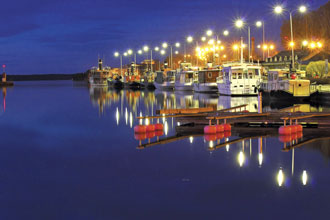 One of the golden gifts we seniors get to unwrap in our Christmastide quiet is the gift of memories. Allow me a moment to share one. Come away with me to Finland, to a remote village, on the shore of a lake, deep in the endless forests. The other shore of the lake is the border of the Communist Soviet Union.

It is the summer of 1990. The weather is warm. There is a gentle breeze. A crowd is gathered on the shore where three long boats are being boarded. Many in the crowd are dressed in colorful Eastern Finnish or Karelian folk costumes. An Orthodox priest is directing the boarding of the boats.

In the first boat young men in Church vestments hold high the banners from the Church. Many passengers carry candles or icons. All are filled with emotion. They are going home, back across the lake to where many of them were born, and from where many of them had fled some fifty years ago.

Even though the Communists had evacuated the village, the Church still stood. An old woman told me that the Church was seven kilometers and fifty years from here. She could see it in the distance from a hilltop in winter. Now the Soviet Union was melting. Communism was losing control. The border was slowly opening. For a year the priest had negotiated his way through the remaining rusty Soviet bureaucracy to gain permission to return with his flock to the abandoned Church and churchyard to sing the service for the departed in the cemetery. Now it was happening. Three long boats skimmed across the waves from Finland to the Soviet Union.

Slowly on the approaching shore the figures that came into view were recognized as soldiers. A line of uniformed Soviet Soldiers stood stretched across the hilltop above where the boats landed. The Priest, who spoke Russian, swung out of the boat and sloshed ashore, as a Soviet Officer with a chest full of medals came down the hill toward him. Unintelligible bursts of conversation could be heard between the two.

Suddenly the officer turned toward his troops and shouted an order, and the troops came charging down the hill toward the boats. The priest faced his flock speechlessly as the soldiers seized the banners. Others begged with gestures to carry the icons. Quickly the people in the boats realized what was happening and choking with emotion they gave their icons and candles to the young Soviet soldiers who now turned forming the procession and leading the faithful to the Church.