The Man In The Red Rubber Nose 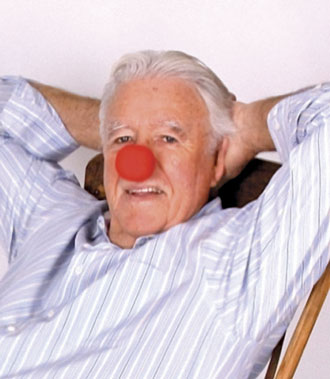 Some of you out there remember John Fraser and his one-man show at the Lakeside Little Theatre last season, “The Joy of Aging Disgracefully.” He’s back for the winter and we’re delighted he’s here.

Here’s how he became who he is now. John’s professional career got off to an early, indirect start at age 17 when he got expelled from high school, because he wasn’t working hard enough, and there was that little matter of beer in his locker.

He went to work in a steel mill at night and took some high school exams, enough to “slip under the wire” and get into a teacher training college, because teachers were in demand at the time. Also, his buddy told him that at the school there were five girls to every guy.

Ironically, this high school dropout had a high school named after him in 1990, the John Fraser Secondary School in Mississauga, Ontario.

He started first as a teacher and eventually retired from the position of Director of Education in the Ontario, Canada area, where he supervised 170,000 students in a large school district adjacent to Toronto.

John found his way down here through the recommendation—as did so many of us—of others. In the early 90’s a number of his staff members traveled to Ajijic and invited him to come too. He asked about the attractions here. Fine weather was mentioned first, of course. After he heard more about Lake Chapala he said, “You sit around in a great climate in a town beside a polluted lake?”

But in 2005 when he was teaching in a duplicate bridge center, a couple came in to play. Both of them had nice tans and had just come back from Ajijic. The wife couldn’t make the next trip and the husband offered John to be a guest the following November and to be his duplicate bridge partner.

He did come down here, and found it to be “charming, first class, friendly, safe, the price is right and there are interesting cultural events. It’s small enough to walk everywhere.”

That was then and now he’s wintered here for 12 years straight.

In addition to being a retired and highly esteemed educator, duplicate bridge enthusiasts will be interested to know John has 2400 master points. He’s a life master at the Silver Level, approaching Gold. We think this sounds impressive.

We should also mention how John has reinvented himself several times. After his career in education, in retirement he became a duplicate bridge instructor. He also worked for the Holland American Lines as a dance instructor on four world cruises. Part of his job was dancing with and charming the single ladies on board.

In his work as a Director of Education he had years of experience in speaking before large groups. He confesses to a low threshold for boredom and is attracted to humor as a remedy, so after retirement in 1988 he went one night to an open mike night at the Laff Resort in Toronto to try out his stand-up comedy skills, and that was the start of his comedic career.

John is an active member of ACTRA, the Alliance of Canadian Cinema, Television and Radio Artists.  He won membership by competing and auditioning and winning roles that are open to professional actors.

His face can be seen on billboards and the backs of buses nowadays, as the face and voice of a large personal injury law firm.

There’s a brief moment in the film Good Will Hunting when John—a Marine Corps general this time—is sitting side by side with Matt Damon. We’ll have to check it out.

One of John’s last performances was a motivational and inspirational talk before a medical conference of 6500 delegates in Montreal in 2014.

He discovered that his best audience is people his own age, so he created his act with the title of “Vegetating with Verve.” That worked for a while until an elderly lady with a hearing problem introduced him to an audience as about to give a talk on “Vegetables and Herbs.”

He was therefore led to change the title of his act to “The Joy of Aging Disgracefully,” where he introduces his philosophy of “So What If…….

I fart after every mouthful of food? I’ll get a dog and blame it on him.”

In addition to helping seniors come to terms with the pitfalls and potholes of aging, John has written several novels. The latest one is The Reluctant Gigolo: A Work of Fiction.  It’s available on Amazon.  Lately a couple of screenwriters have visited him here at Lakeside to work up a screenplay that hopefully will turn into a movie.

John has done his show to benefit many organizations and we’re hoping to see him again this season. Look for an announcement!