By Norah Valentine
(*Skromnost. The Czech word even sounds like what it is: Modesty.) 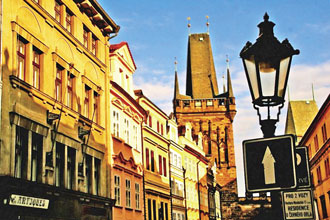 I looked at a flat one day.  Its graceful lines had been altered by makeshift rebuilding with materials that had been scavenged in leaner days.  I thought: no.  I peered doubtfully into a small parlor where there was a wooden desk on a deeply faded Persian carpet.  The view was to a baroque church.  The other three walls were lined with bookshelves, holding titles in Czech, maybe Slovak, Russian, French, German, and English.  But what was most striking: they were all dog-eared copies that had rested in so many different palms over time. Placed furtively into small leather satchels and Škoda glove compartments.  The look of this library told me they’d been passed discreetly from friend to friend, brother to cousin, priest to musician, butcher to street cleaner, and back inexorably to this flat.  The owner had queued for hours on a chilled morning for one or two of these precious books.

Sometimes they would be gone by the time he reached the head of the line, or sometimes he would be lucky.  Then imperceptibly the books would move through the network of the hungry and passionate to return in the end, barely held together, to these bookshelves. What risk and generosity to share books that had been more or less banned. I counted the chilly mornings, the hours he must have spent in line to have collected so many and thought ruefully of the shiny covers stacked by my bed, books partly read. I drew breath and dropped into a chair.

I came back to my big country many years later and remembered.  I searched for modesty and was a little sad. Plíšková, whose first name turned out to be Karolina, won the semifinal that humid night in September at the US Open.  She was shining, having held her nerve and as surprised by it as were the commentators.

A finger of sun spread languidly across the violets in a glass on the table.

It will change now for Plíšková.  Her English will become more certain. She’ll look straight at the crowd now in a little dress, made by somebody important, that shows off her genotype.

(Ed. Note: Ms. Valentine is a psychotherapist. She has re-patriated from 20 years in Prague, working with internationals, artists and activists.  Experience with post-Communist transition has led to convening groups in the US on “Restoring Our Democracy, Restoring Ourselves” and “Tribulations & Creativity of Expatriate Life in Provocative Times.”)