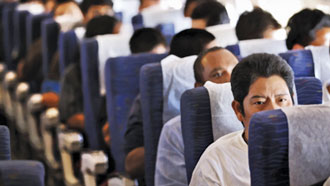 According to data from the National Immigration Institute in the first ten months of 2016 around 10,500 migrants have been deported back to Jalisco from the United States. These returning jaliscienses are eligible for funds from The Fondo de Apoyo a los Migrantes, each of Jalisco´s 125 municipalities has access to these funds which are allocated to help with transportation expenses, shelters and to help returning citizens earn a living. This sounds good, but who are our deported neighbors and what did they leave behind when they were forced to return to Mexico?

One day, I was riding a public bus in Guadalajara, where I live, my cell phone rang and the conversation was in English. The moment the call ended a young man, in his twenties, took the seat next to me. He told me he had recently been deported from Arizona where he was studying accounting and working part time in a credit union. Currently he was living with an aunt and uncle whom he had not seen since he was two years old; the trouble was he could not speak Spanish as his parents insisted he speak only English. He is currently attending Spanish Immersion classes and hopes to eventually get a job in a Mexican bank.

Shortly after that encounter I went to look at a condominium being built close to where I live. The poised thirty something saleswoman showed me through the complex, answered my questions and chatted amicably in Spanish. When I left she thanked me in unaccented English. I asked why she allowed me to struggle in Spanish when her English was flawless. She told me she had been deported and needed to practice Spanish. Her’s was a sad tale. She had been involved in an accident, been deported and forced to leave her husband and her three US- born daughters. She would like to return to the U.S., but the process is long, uncertain and costly. In fact she must wait five years before she can apply, then she is required to use an immigration attorney and nothing is guaranteed.

Another time I was shopping in nearby Tonala and encountered an owner of a business who switched from Spanish to English. His story was of being deported, but being fortunate because his wife’s family were glass manufacturers and they offered him a job because he is bilingual. He brought his Mexican born wife and their two US born children to live in Mexico.

Another local man I met one day was deported for driving drunk, not the first time. As a child he was brought to the US where he was educated through community college. He worked as a mechanic for a Sacramento, California auto dealership.  He left behind a US born wife and five children, one with severe Downs Syndrome. He said they had a nice house with swimming pool, the children did well in school, the family went on regular trips to the beach or Disneyland, and except for his occasional drinking it was a happy family and he never thought about being an illegal immigrant until he was deported to Tijuana.

Eventually he made his way to his grandmother in Guadalajara. In the past three years his fourteen year old daughter has become pregnant, his boy with Down Syndrome has died, his wife lost their house and new van and although he works as a mechanic, he does not make enough to help his California family. Currently he is living with a local woman and they have a fourteen month old. The one bright spot, his eighteen year old son has joined the US Marines.

One woman I met told me her mother and father were legal farm workers in the US, but when her father abandoned his pregnant wife for another woman, my acquaintance’s mother returned to Mexico to give birth.   As a baby Claudia, my acquaintance, went to California and eventually married a Navy man together they had two children and moved to North Carolina where Claudia was a medical receptionist. She says that one day two Immigration and Customs Enforcement agents came to her office and asked about her legal immigration status.

She explained what she knew of her background, they took her to a holding facility; she was permitted to phone her husband who could bring her a backpack of personal items and some money. They were not allowed to hug or kiss goodbye before she was flown to Texas, put on a bus and escorted to Mexico, the country she left as a baby. Her husband was granted a transfer to San Diego, so they could sometimes meet in Tijuana however, since that time he has remarried and their two US born children now live in Guadalajara with their mother. He does help with the children´s support and Claudia works in a local hospital, but the pay here is low.

She thinks a jealous co-worker called the ICE officials, “But it doesn´t really matter,” she says. “We have a new life. Next year my teenage daughter is going to live with her grandmother and go to high school in Southern California and my son will do the same in a few years.” The children still keep in touch with their father and he promises to help with high school and college expenses.

Recently there were flyers, in English, on almost every electric pole near where I live. These posted pieces of paper advertised jobs for English speakers. I phoned and was informed that a call center was relocating from Arizona and needed about five hundred English speakers, age made no difference.

I went to investigate, the majority of the applicants were young people in their twenties, and I did meet one man about fifty who had been a plumber in the States. Most of the young deported people admitted to having been in some sort of minor trouble in the US, most were from Arizona and California and a few from Texas. They were glad for a job even though the pay for full time employment was only equivalent to USD five hundred dollars per month, they do get health benefits for themselves and family. Although this US call center has moved from the US and now provides much needed jobs in Guadalajara, the reason the firm moved was not to help Mexicans, but more likely the company’s balance sheet.

From research I found that currently about one in six people being deported are males and that they were picked up at work, while in 2005 only about three percent were picked up at work. Today 27 percent of those deported have lived in the US for more than a year, compared to only five percent in 2005.  Fifty two percent of those currently being deported are forced to leave behind a spouse, or unmarried partner, most with US born children, which must impact the US social services.

The deported persons are taken from the US to the nearest Mexican border town and left to fend for themselves. In Tijuana the local shallow river is now a latrine for the more than three hundred thousand men who live along its banks in cardboard shelters. Young men are approached to carry drugs; women are abducted and turned into sex slaves. The deported must buy their own Mexican destination tickets and all too frequently these young people have no resources.  With predictable results the border town murder rates have increased substantially, as in Reynosa where the murder rate has increased by sixty-six percent in the past few years.

I applaud  the state of Jalisco for trying to rescue these bilingual deportees by offering to pay transportation and help them reintegrate into their own culture.