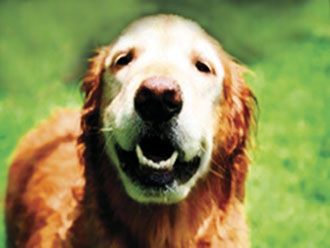 He was an old dog. Locked out of the party place after the revelers had all gone home, he waited for days at the side of the road for his owner to return. He might have been a fine guard dog when he was younger, or a dog that fought in a ring as he had scars and his ears were tattered, or maybe he was a man’s companion who got in fights over bitches, as he sure was macho. I’ll never know.

I took him in the day it rained and he became my responsibility. We took him to the vet, who said he’d been beaten, his bruises hidden by black fur. Bart would look at Francisco with devotion so pure it would break my heart. For the next month the old dog and the tender man, who also had a scarred history, became like one. Neighbors rejoiced, as they had been saddened by the dog that waited for its owner at the side of the road. A man bought him a doggie mattress of purple velveteen; a woman, a spontaneous cash contribution for his care. A feeling of celebration was in the air at the prospect of a solution to Bart’s plight. But there was no solution. What Bart needed was a loving hand to help him over the Rainbow Bridge.

It went unnoticed that Bart sat on either one hip or the other because of a large prostate tumor, that his ‘privates’ dribbled, that he slept with his tongue hanging out because he couldn’t breathe through his nose, even after antibiotic injections, and that he woke up shaking. Perhaps he could have been given more months of life; if I had only known before I had him put to sleep that he had no teeth, and that the lives of our parrot and two felines were not in danger when Francisco wasn’t guarding them. I’ll never know.

Many tears have been shed. Francisco and I have been through a hard time after I made the decision to end a life, a decision that was unalterable, one of no options according to my ideas of kindness. Today we bring Bart’s mattress down from the attic where it has been airing. We will return it to the caring man, who will see to it that another dog in need will have a soft place to sleep.